The 4A was produced from 1980 through 1998. All 4A engines have a displacement of 1.6 L (1,587 cc). The cylinder bore was enlarged from the previous 3A engines at 81 mm, but the stroke remained the same as the 3A at 77 mm, giving it an over-square bore/stroke ratio which favours high engine speeds.

Australian/Swiss/Swedish market engines: Australia, Sweden, and Switzerland shared emissions rules for a period in the 1970s and eighties.

The fuel injected 4A-FE is the successor of the carbureted 4A-F. It was manufactured between 1987–2001. Toyota designed this engine with fuel economy in mind. The 4A-FE is basically the same as the 4A-F (introduced in the previous generation of Corollas), the most apparent difference being the electronic fuel injection system as noted by the E. The engine was succeeded by the 3ZZ-FE, a 1.6-liter engine with VVT-i technology.

There are three generations of this engine and can be identified by the external shape of the engine. The first generation (1987–1993) featured a plate on the head which read "16 valve EFI" and fuel injectors in the head.

Note: power and torque specs for North America and Europe are from the 1988–1992 Corollas.

The 4A-FE is different from the 4A-GE in terms of performance and power. Although both have the same displacement and are DOHC, they were optimized for different uses. The first obvious difference are the valves, the engine's intake and exhaust valves were placed 22.3° apart (compared to 50° in the G-Engines). The second is that it employed a "slave cam system", the camshafts being geared together and driven off one camshaft's sprocket (both camshafts' sprockets on the G-Engine are rotated by the timing belt). Some of the less directly visible differences were poorly shaped ports in the earlier versions, a slow burning combustion chamber with heavily shrouded valves, less aggressive camshaft profiles, ports of a small cross sectional area, a very restrictive intake manifold with long runners joined to a small displacement plenum and other changes. Even though the valve angle is closer to what is considered in some racing circles to be ideal for power (approximately 25 degrees), its other design differences and the intake which is tuned for a primary harmonic resonance at low RPM means that it has about 10% less power compared to the 4A-GE engine. This engine design improves fuel efficiency and torque, but compromises power. Power rating varied from 100–105 hp in the US market. Late-model engines are rumored to make slightly greater power but still received a 105 hp rating. 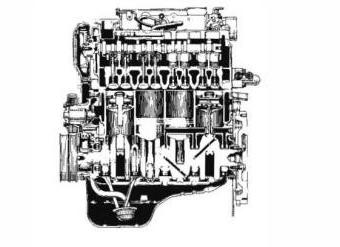 The cylinder head was developed by Yamaha Motor Corporation and was built at Toyota's Shimayama plant alongside the 4A and 2A engines. The reliability and performance of these engines has earned them a fair number of enthusiasts and a fan base as they are a popular choice for an engine swap into other Toyota cars such as the KE70 and KP61. New performance parts are still available for sale even today because of its strong fan base. Production of the various models of this version lasted for five generations, from May 1983 through 1991 for 16-valve versions and the 20-valve 4A-GE lasting through 1998.

The first-generation 4A-GE which was introduced in 1983 replaced the 2T-G as Toyota's most popular twincam engine. This engine was identifiable via silver cam covers with the lettering on the upper cover painted black and blue, as well as the presence of three reinforcement ribs on the back side of the block. It was extremely light and strong for a production engine using an all-iron block, weighing in at only 123 kg (271 lb) - over fifteen percent reduction compared to 2T-GEU. It was also 4 dB quieter. While originally conceived of as a two-valve design, Toyota and Yamaha changed the 4A-GE to a four-valve after a year of evaluation.

The 4A-GE produced 112 hp (84 kW) at 6,600 rpm and 131 N·m (97 lb·ft) of torque at 4,800 rpm in the American market. The use of a vane-type air flow meter (AFM), which restricted air flow slightly but produced cleaner emissions that conformed to the U.S. regulations, limited the power considerably - the Japanese model, which uses a manifold absolute pressure (MAP) sensor, was originally rated at 128 PS (94 kW). However, this was a gross power rating and the motor was later re-rated at 120 PS (88 kW) net. Nonetheless, Japanese cars tested no faster than their American counterparts despite their higher power rating and a lower curb weight.

Toyota designed the engine for performance; the valve angle was a relatively wide 50 degrees, which at the time was believed to be ideal for high power production. Today, more modern high-revving engines have decreased the valve angle to 20 to 25 degrees, which is now believed to be ideal for high-revving engines with high specific power outputs. The first generation 4A-GE is nicknamed the "bigport" engine because it had intake ports of a very large cross-sectional area. While the port cross-section was suitable for a very highly modified engine at very high engine speeds, it caused a considerable drop in low-end torque due to the decreased air speeds at those rpms. To compensate for the reduced air speed, the first-generation engines included the T-VIS feature, in which dual intake runners are fitted with butterfly valves that opened at approximately 4,200 rpm. The effect is that at lower rpm (when the airspeed would normally be slow) four of the eight runners are closed, which forces the engine to draw in all its air through half the runners in the manifold. This not only raises the airspeed which causes better cylinder filling, but due to the asymmetrical airflow a swirl is created in the combustion chamber, meaning better fuel atomization. This enabled the torque curve to still be intact at lower engine speeds, allowing for better performance across the entire speed band and a broad, flat torque curve around the crossover point. During rising engine speed, a slight lurch can occur at the crossover point and an experienced driver will be able to detect the shift in performance. Production of the first-generation engine model lasted through 1987.

The second-generation 4A-GE produced from 1987 to 1989 featured larger diameter bearings for the connecting-rod big ends (42 mm) and added four additional reinforcement ribs on the back of the engine block, for a total of seven. The T-VIS feature is maintained. It is visually similar to the first-generation engine (only the upper cam cover now featured red and black lettering) and the US market power output was only increased to 115 hp (86 kW). The first- and second-generation engines are very popular with racers and tuners because of their availability, ease of modification, simple design, and lightness.

The third-generation appeared in 1989 and was in production until 1991. This engine has the silver cam covers with the words only written in red, hence the nickname "red top". Toyota increased the compression ratio from 9.4:1 to 10.3:1. To correct the air-speed problems of the earlier generations, the intake ports in this cylinder head were re-designed to have a smaller cross-section, and hence it has been nicknamed the "smallport" head. This change in the intake ports negated the need for the earlier twin-runner intake manifold and it was replaced with a single-runner manifold. Additional engine modifications to extend life and reliability included under-piston cooling oil squirters, thicker connecting rods and other components. Also of note, the pistons were changed to accept a 20 mm fully floating gudgeon pin unlike the 18 mm pressed-in pins of the earlier versions. All non-U.S. market 4A-GEs continued to use a MAP sensor, while all of the U.S.-market 4A-GE engines came with a MAF sensor. This revision increased the power to 125 PS (92 kW; 123 hp) at 7200 rpm with a torque of 149 N·m (110 lb·ft) at 4800 rpm (128 hp and 105 lb-ft for US-market cars).

The 4A-GE engine was first introduced in the 1983 Sprinter Trueno AE86 and the Corolla Levin AE86 sports version. The AE86 marked the end of the 4A-GE as a rear wheel drive (RWD or FR) mounted engine. Alongside the RWD AE86/AE85 coupes a front wheel drive (FWD or FF) corolla was produced and all future Corollas/Sprinters were based around the FF layout. The AW11 MR2 continued use of the engine as MR layout, transversely mounted midship. The engine was retired from North American Corollas in 1991, although it continued to be available in the Geo Prizm GSi (sold through Chevrolet dealerships) from 1990 to 1992. All 4A-GE engines (including the 20-valve versions below) feature a forged crankshaft rather than a cheaper and more commonly used cast version.

Clarification: In the U.S. market, the 4A-GE engine was first used in the 1985 model year Corolla GT-S only, which is identified as an "AE88" in the VIN but uses the AE86 chassis code on the firewall as the AE88 is a "sub" version of the AE86. The 4A-GE engines for the 1985 model year are referred to as "blue top" as opposed to the later "red top" engines, because the paint color on the valve covers is different, to show the different engine revision, using different port sizes, different airflow metering, and other minor differences on the engine.

The American Spec AE86 (VIN AE88, or GT-S) carried the 4A-GE engine. In other markets, other designations were used. Much confusion exists, even among dealers, as to which models contained what equipment, especially since Toyota split the Corolla line into both RWD and FWD versions, and the GT-S designation was only well known as a Celica version at that time.

In South Africa in 1993 the 4A-GE engine was dropped and replaced with the 7A-FE even as other countries moved towards the 20 valve 4A-GE, as South African fuel was not suitable at the time for the 4A-GE 20valve.

Fourth Generation "Silver Top"
The fourth-generation 4A-GE engine was produced from 1991 to 1995. It has silver cam covers with chrome lettering, hence the nickname "silver top". This engine yet again features a completely new cylinder head which uses five valves per cylinder instead of four. It uses Toyota's Variable Valve Timing (VVT) system on the intake cam, an increased compression ratio (10.5:1), and the intake system was replaced with a short manifold with individual throttles and velocity stacks, however the vane-type airflow meter was retained, requiring the use of a plenum. The previous 16-valve head used a sharply curved intake port, while the 20-valve engine used a very upright straight port. This engine produces 160 PS (118 kW) at 7,400 rpm with 16.5 kg·m (162 N·m) of torque at 5,200 rpm.

Fifth Generation "Black Top"
The fifth-generation 4A-GE engine produced from 1995 to 1998 is the final version of the 4A-GE engine and has black cam covers. It uses Toyota Variable Valve Timing (VVT) system on the intake cam. This engine is commonly known as the "black top" due to the color of the valve cover, and yet again features an even higher compression ratio (11:1). The air flow sensor is replaced with a MAP sensor, the diameter of the four individual throttle bodies was increased from 42 mm to 45 mm, the exhaust port diameter was increased, the intake cam lift was increased from 7.9 mm to 8.2 mm and the intake ports were significantly improved in shape, contour and also the width at opening at the head was increased. Additionally, the black top had a lighter flywheel, a larger plenum, lighter connecting rods and revised rubber velocity stacks, and was also offered in 1997 with a six-speed C160 transaxle. This revision increased the power to 165 PS (121 kW) at 7,800 rpm with 16.5 kg·m (162 N·m) of torque at 5,600 rpm. The 'Blacktop' has become a favorite among enthusiasts and is used as an easy power upgrade for the early Toyota Corolla models, especially for use in the drift scene. Due to the relatively high state of tuning of the stock motor, most power/torque gains come from higher lift cams and engine management.

The 4A-GZE is also popular for turbo conversions, as many parts do not need to be modified to support the extra boost. 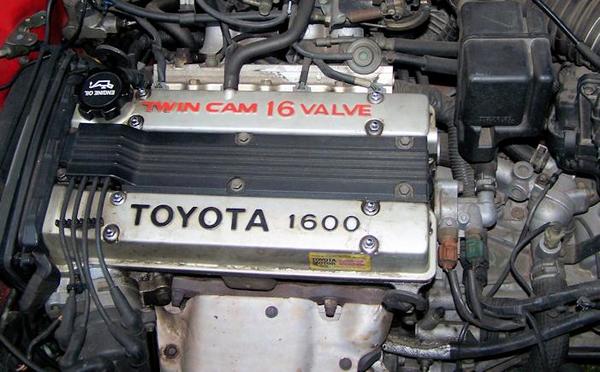