The Suzuki SJ30 began production in May 1981 in Hamamatsu,Japan. In Japan, it was sold as the Suzuki Jimny and was a kei car, produced with both 550 cc and 660 cc 3-cylinder engines. The SJ-Series received a bigger engine and was lengthened and widened for export purposes, where it was sold with a multitude of names: Suzuki SJ410/413, Suzuki Samurai, Suzuki Sierra, Suzuki Potohar (Pakistan), Suzuki Caribbean (Thailand), Suzuki Katana (Indonesia), Chevrolet Samurai, Holden Drover (Australia) and Maruti Gypsy (India).

The SJ30 Jimny 550 was mainly for Japanese domestic market consumption where it suited the Kei car category. Still powered by the LJ50 engine also used in its predecessor, the Jimny 550 was by a sizable margin the last two-stroke engine built in Japan. Production ended with the withdrawal of type approval in November 1987 in favor of its F5A-engined brother, the JA71. The two-stroke had been favored by Japanese off-roaders (and by Suzuki) due to its superior torque. 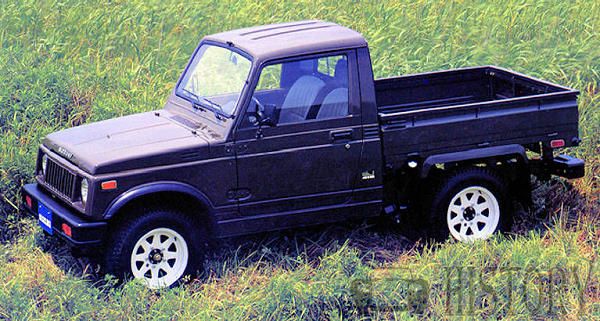 A four-speed manual transmission was standard, as were non-power assisted drum brakes front and rear. The SJ410 came as a half-door convertible, long-wheelbase pickup truck, two-door hardtop (called "Van" in Japan), raised-roof hardtop, and no-glass hardtop (panel van). In Japan, the pickup truck was intended as a bare-bones work vehicle and did not receive fender extensions, and had diagonal tires on black-painted steel wheels rather than the sportier wheels fitted to the regular Jimny. Maximum payload is 350 kg (770 lb). Later, a covered long-wheelbase version was added for export markets.

The SJ410 was also produced in Spain by Santana Motors in their Linares, Jaén factory as of March 1985 and was sold as a domestic vehicle in Europe due to its over 60% native parts content, thereby evading limits on imports of Japanese-built automobiles. It was built only on the short wheelbase, as a two-door convertible and commercial, or with the three door wagon or van bodywork. Some later models of the SJ410 would switch to disk brakes in the front depending on the factory they were made at. In March 1990, Santana-built versions received the same chassis developments which turned the SJ413 into the Samurai; this version was sold as Samurai 1.0 where it was offered ("Samurai Mil" in Spain).Cooper Motor Corporation (CMC) of Nairobi, Kenya, also assembled the SJ410 in the mid-eighties. 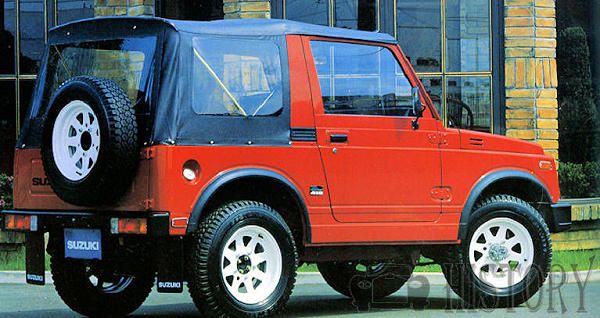 This Indian built SJ-410 has only ever been available in a long-wheelbase version. The Gypsy remains in production for the South Asian market, as does the Pakistani "Suzuki Potohar". The version still produced in India by Maruti-Suzuki is the Maruti Gypsy King, using the sixteen valve, 80 hp (60 kW) 1.3 liter G13 engine. 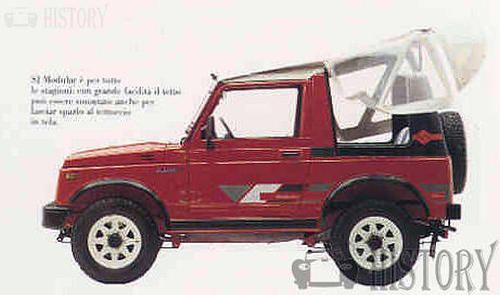 In 1984, the SJ was revamped with the launch of the SJ413 (internal model code JA51). The SJ413 included a larger 1.3 liter 4-cylinder engine, 5-speed manual transmission and power brakes all around. The body and interior were also redesigned, with a new dashboard, seats, and grille. The SJ410 remained in production for various other markets with the old specifications.

The SJ-Series was introduced to the United States (Puerto Rico (SJ-410) and Canada earlier) in 1985 for the 1986 model year. It was priced at just $6200 and 47,000 were sold in its first year. The Samurai had a 1.3 liter, 63 hp (47 kW), 4-cylinder engine and was available as a convertible or a hardtop. The Suzuki Samurai became intensely popular within the serious 4WD community for its good off road performance and reliability compared to other 4WDs of the time. This is due to the fact that while very compact and light, it is a real 4WD vehicle equipped with a transfer case switchable 4WD and low range. Its lightness makes it a very nimble off roader less prone to sinking in softer ground than heavier ones. It is also considered a great beginner off-roader due to its simple design and ease of engine and suspension modifications.

The 1988.5 model Samurai was re-tuned for better on-road use in the United States. This revision included softer suspension settings and a larger anti-sway bar to reduce body roll. A lower 5th gear (.865:1 vs the earlier .795:1) increased engine rpm and power on the highway, and improved dashboard and seats made the Samurai more comfortable.

A new 1.3 liter four-cylinder engine with throttle-body fuel injection was introduced with 66 hp (49 kW) in September 1991 The Samurai was supplemented in Canada and the United States markets in 1989 by the Suzuki Sidekick, which eventually replaced the Samurai in 1995. The rear seat was removed from 1994 and 1995 Samurai models with rear shoulder safety belts becoming mandatory, and the partial roll cage not having the required mounting provisions, unlike the larger Jeep Wrangler. Low sales and pending stricter safety legislation prompted the withdrawal of the Samurai from Canada and the United States markets after 1995.

An unfavorable 1988 review of the Samurai in Consumer Reports for being unsafe and prone to rollovers led to a controversial lawsuit.

The SJ413/Samurai had a longer history in the rest of the world. Australian built JA51s were sold as either Suzuki Sierra or Holden Drover, while those built in Thailand are called Suzuki Caribbean. The Caribbean has also been available as the "Caribbean Sporty", a unique LWB double cab pickup.

Due to various trade obstacles for Japanese cars, Spanish Santana Motors (in addition to the SJ410) began local production of the SJ413 in 1986. The Santana built SJs had softer springs for an improved on-road ride, color coordinated interiors with cloth seats and carpeted floors, all to broaden appeal to those who did not intend to off-road the vehicle. In 1989 it received some optical as well as chassis updates and received the "Samurai" nameplate. Santana built Samurais did not benefit from the updated coil sprung chassis introduced in 1998, instead receiving a facelift (new grille, more rounded bumpers) specific to European and neighboring markets. Around the same time, Santana also developed a version which used PSA's XUD 9 1.9-litre turbodiesel, producing 63 hp (47 kW). Top speed was 130 km/h. Spanish Samurai production ended in 2003.

The Samurai was sold in Colombia and Venezuela as Chevrolet Samurai, assembled in Bogotá, Colombia by General Motors Colmotores. In other South American markets (Argentina, Bolivia, Brazil, Chile, Peru, Paraguay and Uruguay) it was sold as the Suzuki Samurai. Long wheelbase models were not offered in the Mercosur.

In Asia the SJ/Samurai was sold under a few different names. In Thailand it was called the Suzuki Caribbean. The Thai market also received a special version called the "Suzuki Caribbean Sporty", a pickup with an extended cab with a small rear seat best suited for occasional use.

The SJ410 was also assembled in Indonesia, where it was marketed with different names. The original version is marketed as Jimny, continuing the previous LJ Jimny. The canvas soft-top model was marketed as Sierra. In the late 1980s, Suzuki introduced 4x2 version as the Katana. Later Katanas & Jimnys received square headlights. The Katana was also, surprisingly, used as a basis for an Indonesian-built, 1930s' style kit-car called the Marvia Classic. In 2005, Suzuki introduced SJ413 Caribian spacecab pickup, which was imported from Thailand. 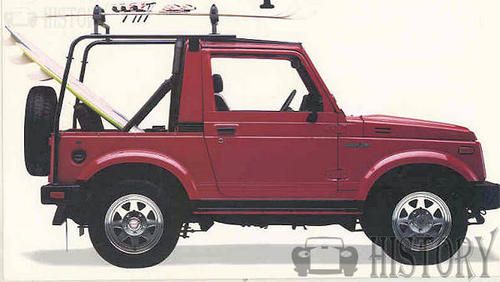 The Samurai in question benefitted from wheel, tire, and suspension changes, and a supercharged G16A 4-cylinder underhood. It was the third attempt for the two man team, after encountering weather difficulties on the first attempt and an engine fire in the second. The previous record holder's team led by Matthias Jeschke driving a Jeep Wrangler, left a sign reading "Jeep Parking Only: All others don't make it up here anyway". The Chilean team found the sign, blown down by strong winds, and brought it back to civilization as a souvenir.

This record was duly certified by the Guinness World Record in July 2007.

In January 1986 the JA71, a four-stroke, turbocharged and fuel-injected (F5A) 543 cc three-cylinder engine was introduced to complement the two-stroke SJ30. It used the upgraded interior from the Jimny 1300, which was simultaneously introduced to the SJ30. Power was 42 PS (31 kW), although this was increased to 52 PS (38 kW) in a November 1987 facelift by adding an intercooler. A non-intercooled, 38 PS (28 kW) engine was offered in the lowest spec Van version. At the same time, a glassed high-roof version ("Panoramic Roof") was added.

The JA71 was replaced in March 1990 by the new JA11 as new Kei category regulations took effect. Now with 657 cc on offer, the otherwise similar F6A engine only came with an intercooler and 55 PS (40 kW). A utilitarian van (HA), as well as more luxurious Hardtop, Convertible, and Panoramic Roof (HC, CC, EC) versions were on offer. The suspension was also upgraded, while a longer front bumper meant that the foglights could be mounted in front of the grille rather than in it. In June 1991, power was increased to 58 PS (43 kW) and a year later power steering and automatic transmission became available for the first time. Top speed of this version was 120 km/h (75 mph). In February 1995 power increased to 64 PS (47 kW), but production of the JA11 ended only nine months later with the introduction of the coil sprung JA12/22.

The JA12 used the 657 cc F6A from the JA11 three-cylinder while the JA22 received the newly developed and more powerful K6A - although to abide by the Kei Jidosha regulations claimed output was 64 hp (48 kW) for both engines. The JB32 received the larger 85 hp (63 kW), 1.3 litre G13BB 16-valve engine was slightly longer and wider due to bigger bumpers and fenders. This was the model seen in most export markets, although abroad it was usually equipped with the eight-valve, 70 hp (52 kW) G13BA engine instead.

The Samurai continued for sale outside the United States (where the newer version is referred to as the 'Coily'), with a substantial update in November 1995. This included a coil spring suspension, though the live axles were retained. The rest of the truck was redesigned as well, with new seats, dashboard, steering wheel, and doors joining a more "macho" exterior.

Not all models were updated however, with the original narrow SJ410 still in production in some countries. While the third generation Jimny replaced the Jimny/Samurai in most markets after 1998, it still remains in production in India.