The compact off-road capable Suzuki Jimny was Suzuki's first global success, lending it name recognition and a foothold in markets worldwide. The Jimny slotted into a hitherto unfilled gap in the market.

Suzuki's first move on acquiring the rights to the ON360 was rebodying it and replacing the Mitsubishi engine with an air-cooled 359 cc (21.9 cu in) Suzuki "FB" two-cylinder two-stroke which produced 25 hp (19 kW). Since the new unit remained smaller than 360 cc, and Suzuki placed the spare tire inside the truck (making it a three-seater) to keep it under 3 meters in overall length, it was classified as a kei car, conferring certain tax privileges and other benefits. When it was introduced in 1970 it was the first four-wheel drive kei car to enter series production. The LJ10 Jimnys had sixteen inch wheels, weighed 590 kg (1,301 lb), and had a top speed of 75 km/h (47 mph). The engine was soon uprated to a 27 hp version, but claimed top speed remained unchanged.

The LJ was updated in May 1972 and renamed the LJ20. The grille bars were changed from horizontal to vertical for the LJ20. The engine was replaced with a water-cooled unit (the L50), and its 28 hp (21 kW) enabled the LJ to reach 80 km/h (50 mph). A special version with the spare tire mounted behind the passenger seat allowed for two small rear seats, facing each other. The introduction of left hand drive signalled Suzuki's worldwide ambitions for the truck. The Hard Top (Van) was also introduced when the LJ20 arrived, equipped with smaller, 15 inch wheels.Suzuki themselves did not export them to America, a US company called IEC (International Equipment Co.) imported them. Export Jimnys had the spare tire mounted on the outside, as Kei regulations on length did not apply. 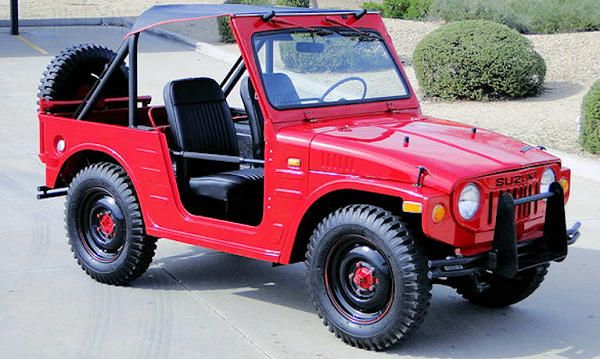 The LJ50 engine was first introduced in September 1975 for export only, with 33 hp (25 kW). For the home market, it first appeared in June 1976 as the Jimny 55 and reflected the changing kei car rules and stricter emissions standards. The 539 cc (32.9 cu in) three-cylinder engine remained a two-stroke; while power was reduced to 26 PS (19 kW) more low-end torque was on offer. The 635 kg (1,400 lb) vehicle could now hit 60 mph (97 km/h), and the spare tire was relocated outside the rear door, allowing for a fourth seat. The SJ10 Jimny used the "LJ50" name in most export markets.

In Australia the LJ50S and LJ50V (van) were available as a softtop with soft doors and rear-mounted spare wheel or hardtop with full metal doors and external spare wheel through distributor M.W.-Suzuki (Melbourne) with 33 hp (25 kW) and 5.85 kgf·m (57.4 N·m; 42.3 lbf·ft) of torque. In May 1976, the low production LJ51P long wheelbase pickup became available for some export markets. The home market Jimny 550 received a facelift in 1977, introducing rear wheel arch metal flares and a bigger bonnet or hood with cooling slots above the radiator, while the export model LJ50s were instead replaced by the LJ80 (same external modifications but with the new four-stroke four-cylinder 800 cc engine fitted)

The final iteration of the original Jimny design was the 1977 Jimny 8, called LJ80 in certain export markets. It was originally intended to be marketed as the Eljot ("Elliott") in Germany, but copyright issues with Disney's Pete's Dragon movie made this impossible. While the SJ10 remained in production for the domestic Kei category, the new 1700 lb (770 kg) SJ20 boasted a 797 cc (48 cu in) 4-stroke SOHC four-cylinder F8A engine capable of around 41 hp (31 kW). The additional power and torque of this engine allowed the differential and gearing to be raised for better cruising and offroad performance, and the track was widened by 4 in (100 mm).

The interior was also improved, with new seats and steering wheel. Metal doors became available for the first time in 1979, and a pickup truck model (LJ81) was available by April of that year as well. The pickup, called "Stockman" in Australia, had a 2200 mm wheelbase (up by 270 mm) and was 3,620 mm (143 in) long, compared to the 3185 mm LJ80. The Jimny 8/LJ80 was retired in late 1981 with the introduction of the second generation Jimny.