In July 1969 the Giugiaro designed L40 Carry was introduced. In November of the same year, a van version with two opening side doors and a top-hinged rear gate was added. Giugiaro's design was more obvious in the Carry Van iteration, very symmetrical with similar looks to the front and rear. The L40's design was not overly utilitarian, limiting interior space and being a bit too modern for the usually very orthodox Japanese commercial customer base. On the other hand, the L40 did benefit from an updated, 25 PS (18 kW) version of the now venerable FB engine.Dimensions, dictated by kei jidosha regulations, remained 2,990 mm × 1,295 mm (117.7 in × 51.0 in) and 359 cc (21.9 cu in). Max load was 350 kg (770 lb) for the truck, and 300 kg (660 lb) for the van versions. Top speed increased considerably to 95 kilometres per hour (59 mph).

As part of a minor facelift in April 1971, the Carry received a 27 PS (still at 6,000 rpm) version of the well known FB engine, featuring Suzuki's CCIS (Cylinder Crank Injection and Selmix) lubrication system. This engine also found its way into to the recently introduced LJ10 Jimny. Torque was 3.7 kg·m (36 N·m; 27 lb·ft) at 5,000 rpm. There was also a Panel Van version, with a boxy unit mounted on the rear of a Carry truck chassis. In 1971, a V40FC Camper version of the Van was also added.

The fifth generation L50 Carry debuted in May 1972, followed by a new Carry Van in August. The new model echoes Giugiaro's design, but without ventilation windows in the front doors and with a more traditional appearance. Headlights are now round, while the van version receives a more square rear body and with a sliding rear side door. The engine is a water-cooled design (L50), otherwise similar to the previous engine but now with 28 hp (21 kW). Max load was back up to 350 kg (770 lb).

In December 1972, a five-door van (L50VF, with sliding side doors) was added. Three months later, the dropside L51 went on sale. In November 1973 the Carry underwent a minor facelift, receiving a new grille and modified front bumper. The fifth generation Carry led Suzuki to great market success, with Suzuki selling more kei trucks than all others during 1973 and 1974. In September 1975 a special export version was introduced, aimed at customers who wanted more loading ability. The new L60 series received a larger, 446 cc (also "L60") version of the L50 two-cylinder. 29 hp (as opposed to 26 for export market 360 cc models), a stronger differential "to transmit the generous torque" and sturdier springs meant load capacity increased to 550 kg (1,200 lb). For 1975, the Carry received minor changes allowing for the fitment of new larger license plates. In December 1975, the domestic market L50s' engine lost two horsepower (down to 26) in the effort of fulfilling new, stricter emissions standards. 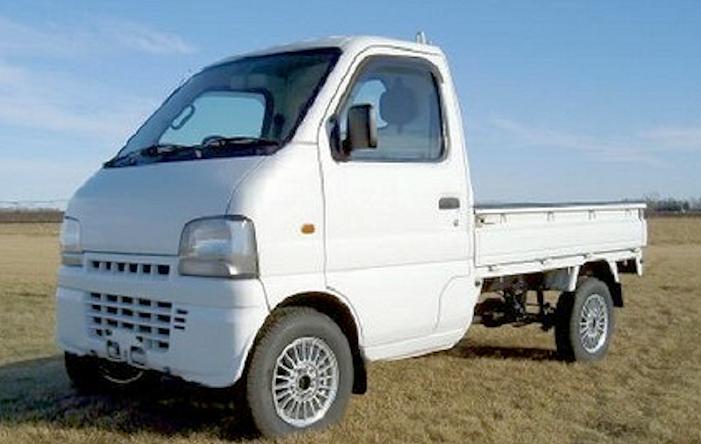 In May 1976, responding to changed standards for the Kei class, Suzuki released the Carry 55, chassis code ST10. It had the larger, water-cooled but still two-stroke three-cylinder LJ50 engine of 539 cc but was otherwise hard to tell apart from the preceding L50 series.

Soon thereafter, in September 1976, the interim ST10 was replaced by the widened and lengthened ST20 pickup version. Marketed as the Suzuki Carry Wide 550, it now reached the maximum dimensions set for the Kei class. In November, the ST20 Van took its bow - this version was 4 cm (1.6 in) shorter than the truck, so as not to necessitate the development of entirely new rear bodywork. A little later yet, the ST20K was released. The "K" referred to the "trucklike" nature of the vehicle in that it had 3 drop sides as opposed to the utility version which had only a tailgate and formed sides. The ST20 range retained the three-cylinder 539 cc two-stroke engine of the ST10 and has a carrying capacity of 350 kg (772 lb). By 1977, the export only ST80 appeared - this version was the first Carry to be equipped with a four-stroke engine, the inline-four 797 cc F8A as recently introduced in the LJ80 Jimny.