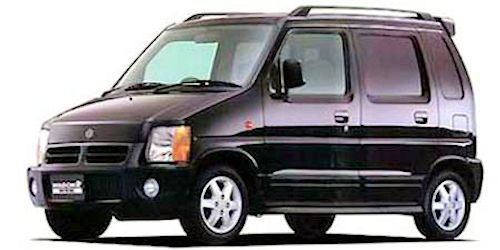 The Wagon R-Wide, introduced in February 1997, is a slightly larger car, exceeding the kei car specifications, with larger engines: 1.0 (K10A, 48 kW/88Nm),1.0 Turbo (JDM, New Zealand and Australia only, K10A, 110 kW/118Nm) and 1.2 (K12A, 51 kW/93Nm) litre engine. The Wagon R-Wide was sold as the Wagon R+ in the European market (also introduced in the same year) with the atmospheric versions of the 1.0 K10A and the 1.2 K12A. The only other tall wagon style car sold in Europe around the time of its introduction was the Daihatsu Move. The car was made in Japan. It was not galvanised and it was prone to rust, specially in the sills, after years of use in Central and Northern Europe. The Wagon R-Wide was slightly facelifted in May 1998, and this updated Wagon R-Wide was also sold in Europe under Wagon R+. In Europe the first generation was sold from 1997 until May 2000.

When the second generation Wagon R-Wide was launched in May 1999, this became the Wagon R+ in Japan as well. This updated version started sales in the European market in the summer of 2000. The main difference between the JDM Wagon R-Wide/+ and the European Wagon R+ is the door handles, which on JDM models were body-colored while European models received black door handles.

However, the original Wagon R+ was still offered in Europe after December 2000, but made by Magyar Suzuki in Esztergom, Hungary. This was because it was too difficult for either the Wagon R-Solio or Solio to meet with Euro NCAP crash safety ratings. As a result, the Wagon R+ continued in Europe until late 2008, when replaced by the Splash.

While the Kei-version of the Wagon R went through third and fourth generations, the wider Solio remained in its second generation until undergoing a full model change in December 2010. The third generation Solio is based on the Suzuki Palette instead of the Wagon R, although the Palette itself uses the Wagon R's platform. This generation of Solio (MA15) also provides the basis for an OEM deal with Mitsubishi, rebadged as the Mitsubishi Delica D:2, which was released in March 2011. In Japan, it was sold at a specific retail chain called Car Plaza.

It is currently unknown if the new Solio will be exported to India or not. If so, it will commence sales in either late 2011 or early 2012 as Maruti Suzuki Solio, and will be modified and Indianized to be unique to the price bracket for that country, in comparisons to the Wagon R and the Estilo.

The basic equipment standard across all versions of the Suzuki Wagon-R+ from 2000 to 2007.

In 2000 until 2007, the Wagon R+ is rebadged as Opel Agila. The Agila was built at an Opel factory in Gliwice, Poland and used Opel Engines and transmissions. The new Agila is a rebadged Splash.

In Europe and elsewhere, the Solio has been replaced by the Splash in late 2008.

In Indonesia, the car is called Suzuki Karimun and offered with a 1000 cc (until 2006) and 1100 cc (2007 onwards) petrol engine, whilst in China it forms the base for both the Changhe-Suzuki Big Dipper (Beidouxing) and Changhe-Suzuki F-MPV. The Big Dipper is available with an indigenously built 1.0 based on the old F10A, or with the more modern 1.4 liter K14B engine.

In some Latin American counties such as Colombia, the Wagon R+ was sold under General Motors Chevrolet marque. 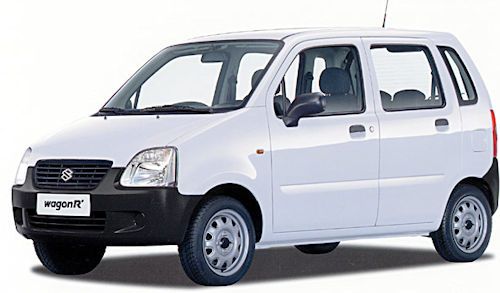 The Wagon R is not well regarded by Top Gear presenter Jeremy Clarkson. He advised viewers "You do not just avoid the Suzuki Wagon R. You avoid it like you would avoid unprotected sex with an Ethiopian transvestite