The first generation Wagon R is 1,640 millimetres (64.6 in) high, or 255 millimetres (10.0 in) taller (170 mm (6.7 in) internally) than the JDM Suzuki Alto sold at the same time (which was exactly the same length and width). The Wagon R used the same 660 cc F6A three-cylinder engines as did the Alto and other Suzuki kei cars. Originally with two doors on the left side and a single door on the right (driver's) side, it was introduced at the 1993 Tokyo Motor Show. Later cars received the more common, symmetrical five-door setup.

The rebadged Mazda AZ Wagon was presented in September 1994. Also using the F6A engine, this model was marketed through Mazda's Autozam network as part of an OEM deal.

A bigger first generation Wagon R, the Suzuki Wagon R+, was added in early 1997 and manufactured in Japan until the end of 2000 for the European market. The car featured a wider body and the K10A naturally aspirated engine with 996 cc and four-cylinders. The same Wagon R+ was also available with a 1.2 litre engine. 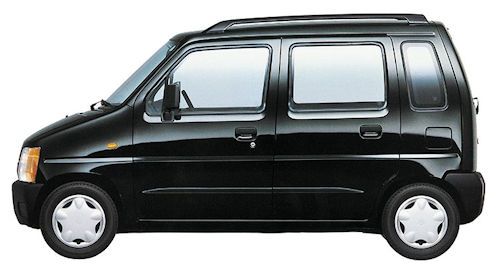