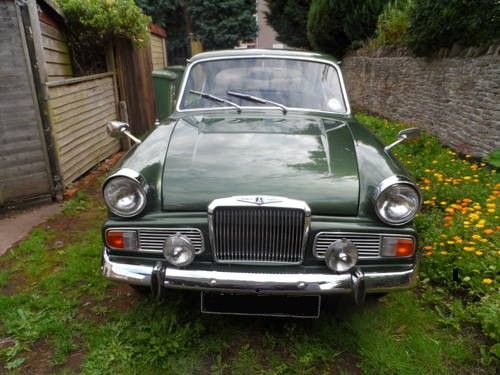 Pending completion of the new Fastback Rapier, Rootes decided to have one more go at updating the well-liked old Sunbeam Rapier. In September 1965 they introduced the Series V version which looked exactly like the Series IV inside and out except for badges on wings and boot which now said "1725", revealing the presence of an important new engine.

Rootes had extensively redesigned their old four cylinder engine to increase its capacity to 1725 cc. Along the way it had acquired a new crankshaft with five main bearings, making the unit stronger and smoother. This was the strong engine that would power the Series V Rapier and be developed for many subsequent models.

To further update the car, they changed its polarity from positive to negative earth and fitted an alternator in place of the dynamo. They also devised a new twin pipe exhaust system so that the new engine could breathe more easily.

The effect of these changes was to increase the Rapier's maximum speed to 95 mph (153 km/h) and reduce its time from rest to 60 mph (97 km/h) to 14.1 seconds. Unfortunately, for all its good features, the Series V just didn't sell. By the time it was discontinued in June 1967, only 3759 units had been built, making it the rarest of all the "Series" Sunbeam Rapiers.