Sunbeam Alpine Series I to V

Kenneth Howes and Jeff Crompton were tasked with doing a complete redesign in 1956, with the goal of producing a dedicated sports car aimed principally at the US market. Ken Howes contributed some 80 per cent of the overall design work, which bears more than incidental resemblance to the early Ford Thunderbird; Howe had worked at Ford before joining Rootes.

The Alpine was produced in four subsequent revisions through to 1968. Total production numbered around 70,000. Production stopped shortly after the Chrysler takeover of the Rootes Group. 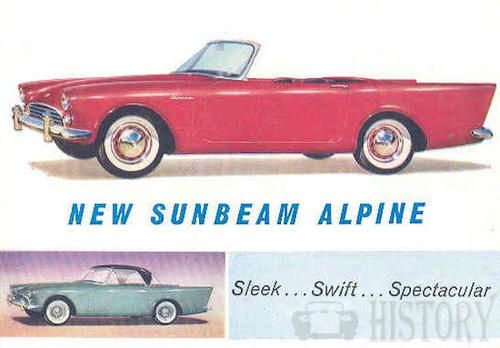 The "Series" Alpine started production in 1959. One of the original prototypes still survives and was raced by British Touring car champion Bernard Unett.

The car made extensive use of components from other Rootes Group vehicles and was built on a modified floorpan from the Hillman Husky estate car. The running gear came mainly from the Sunbeam Rapier, but with front disc brakes replacing the saloon car's drums. An overdrive unit and wire wheels were optional. The suspension was independent at the front using coil springs and at the rear had a live axle and semi-elliptic springing. The Girling-manufactured brakes used 9.5 in (241 mm) disc at the front and 9 in (229 mm)drums at the rear.

Coupe versions of the post-1959 version were built by Thomas Harrington Ltd. Until 1962 the car was assembled for Rootes by Armstrong Siddeley.

In 1960 Sunbeam marketed a limited-production three-door variant of the Alpine, marketed as a shooting brake. With leather interior and walnut trim, its price was double that of its open counterpart. 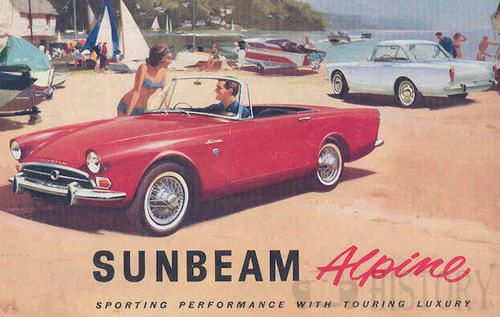 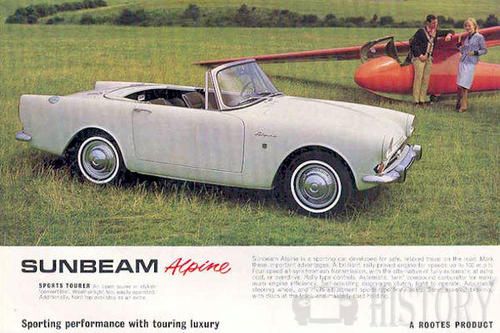 The Series III was produced in open and removable hardtop versions. On the hardtop version the top could be removed but no soft-top was provided as the area it would have been folded into was occupied by a small rear seat. Also, the 1592 cc engine developed less power. To provide more room in the boot, twin fuel tanks in the rear wings were fitted. Quarter light were fitted to the windows. Between 1963 and 1964, 5863 were made. 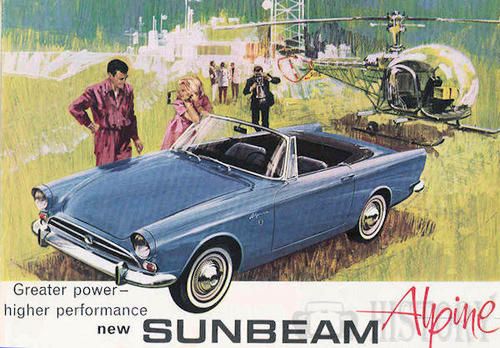 The lower-output engine option was now dropped with convertible and hardtop versions sharing the 82 bhp engine with single Solex carburettor. A new rear styling was introduced with the fins largely removed. Automatic transmission with floor-mounted control became an option, but was unpopular. From autumn 1964 a new manual gearbox with synchromesh on first gear was adopted in line with its use in other Rootes cars. A total of 12,406 were made.

The final version had a new five-bearing 1725 cc engine with twin Zenith-Stromberg semi-downdraught carburettors producing 93 bhp.There was no longer an automatic transmission option. 19,122 were made.

The Alpine enjoyed relative success in European and North American competition. Probably the most notable international success was at Le Mans, where a Sunbeam Harrington won the Thermal Index of Efficiency in 1961. In the United States the Alpine competed successfully in Sports Car Club of America (SCCA) events.

A championship for Don Sesslar finally was achieved in 1964 with 5 wins (the SCCA totaled the 5 top finishes for the year). Dan Carmichael won the Central Division Championship in 1964 and 65. Dan continued to race the Alpine until 1967, when he finished 2nd at the American Road Race of Champions.

Bernard Unett raced factory prototype Alpine (registration number XRW 302) from 1962 to 1964 and in 1964 won the Fredy Dixon challenge trophy, which was considered to be biggest prize on the British club circuit at the time. Unett went on to become British Touring car champion three times during the 1970s.

A six-car works team was set up for the 1953 Alpine Rally. Although outwardly similar to their production-car counterparts they reputedly incorporated some 36 modifications, boosting the engine to an estimated 97.5 bhp..

Alpine (pronounced Alpeen) was also a French car manufacturer producing various models until absorbed by Renault in a move unconnected with Renault's takeover of some of the commercial vehicle assets formerly belonging to Chrysler Europe. 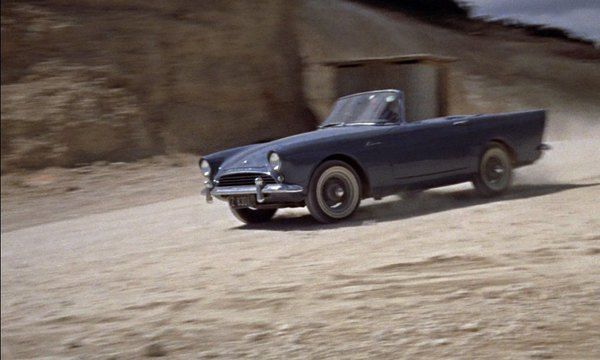 Sunbeam Alpine Series II Sports—Featured in Dr. No. Bond drives to Miss Taro's home in the Blue Mountains; he is pursued by Dr. No's thugs driving a LaSalle hearse. It is a Lake Blue example that was owned by a local resident in Jamaica where the scenes were filmed.

In the novel Dr. No, Bond drives the car that formerly belonged to Commander Strangways, the murdered agent in Kingston. It is also driven by Quarrel. In The Man with the Golden Gun novel Mary Goodnight uses the car and she hands it to Bond so he can use it while he is on assignment.