The Outback concept originated with Subaru of America, which was suffering from slumping sales in the mid-1990s partly due to a lack of an entry in the then-burgeoning sport utility vehicle market. Lacking the finances to design an all-new vehicle, Subaru decided to add body cladding and a suspension lift to their Legacy wagon. Named the Legacy Outback, after the Australian outback, actor Paul Hogan was the spokesman in the North American market, playing off the Australian name of the vehicle and portraying the vehicle as a capable and more efficient alternative to large, truck-based SUVs. Sales exceeded expectations, with Tim Mahoney, Senior Vice President of Subaru of America stating "[the Outback] saved our company."

The Legacy Outback was formally introduced to the North American market at the 1994 New York Auto Show, and was known in Japan starting August 1995 as the Legacy Grand Wagon, and in Australia as the Outback, a trim package with normal ground clearance but an "SUV look" with two-tone paint and fog lights. For the 1995 model year, the Legacy wagon in the North American market was available as the Alpine Sport and Sun Sport, which were Value Option Packages included on the "L" trim level wagon, and graphics denoting the option package installed. In Japan the Legacy wagon was called the Legacy Touring Wagon so the Grand wagon nomenclature was meant to signify a more grand, luxurious approach to equipment offered. The exterior was designed by Olivier Boulay, who was hired by Subaru on a short-term basis.

For the 1995 model year, the first year the Outback was introduced, the Outback was a trim package on the base model Legacy wagon "L", that primarily consisted of the heavy cloth interior, berber carpet floor mats, a luggage rack and fog lights with a standard height suspension. This approach was also used on the smaller Impreza wagon, with the name Outback Sport. When the 1996 model year arrived, it gained more aggressive appearing front bumper covers, with larger rallye inspired driving lamps replacing the previously installed fog lights, taller tires with more aggressive tread, and a 7.3 in (185 mm) ground clearance, with a 7.87 in (200 mm) ground clearance in Japan. The more aggressive appearance was also used on the smaller Outback Sport while omitting the increase in ground clearance from suspension modification. This approach was inspired by the Legacy having been entered into international rallying and long distance racing events, and winning the 1990 Safari Rally in the Group N category.

The previous generation Legacy wagon had an optional air suspension, which allowed the driver to temporarily increase the vehicle's ground clearance, however the permanent increased ride height used on the Outback proved to be more practical. Subaru sales had been declining up until that point in North American market. With the help of clever marketing, a trim level called the Outback intent on making the Subaru a more capable multi-terrain vehicle offered an affordable and fuel efficient alternative to the popular SUVs that were outselling Subaru's traditional offerings. The Legacy and Outback wagons were built at the Subaru of Indiana Automotive production facility in Lafayette, Indiana that also manufactured the Isuzu Rodeo and the badge engineered Honda Passport, traditional SUVs with transfer case installed four-wheel-drive and an extended ground clearance.

In September 1997, the Japanese Legacy Grand Wagon was renamed Legacy Lancaster though 1998 cars retained the Grand Wagon nameplate along with the new Lancaster plate. Earlier versions of the Outback continued to use the EJ22 four cylinder engine, while later generations introduced the larger EJ25 four cylinder engine, revised with DOHC and more horsepower. The JDM Grand Wagon and Lancaster were only available with the DOHC 2.5-liter flat-4 engine, receiving a 10 hp (7.5 kW) improvement in 1998. Some Japanese-spec Grand Wagons came with digital climate control, plaid seat upholstery, a dual-range manual transmission and a Momo black leather steering wheel. Because the only engine available in Japan was the 2.5-liter engine, and the engines displacement exceeded Japanese regulations for vehicles classified as a "compact", Japanese buyers of the Grand Wagon were liable for taxes charged to larger cars, and was regarded as a luxury vehicle in Japan.

All trim levels retained the typical AWD layouts seen in previous generation Legacy, depending on transmission choice. Manual transmission models came with a mechanical "Continuous AWD" system which was normally 50/50 front/rear, and relied on limited slip differentials to redirect power front to rear, rear to front, and from one rear wheel to the other (when fitted with a rear limited slip differential). Automatic transmission models had an electronically controlled AWD system that was 90/10 front/rear and redirected differing amounts of power to the rear wheels continuously. When accelerating or driving uphill, the vehicles weight shifts rearward, reducing front wheel traction, causing the transmission to automatically send torque to the rear wheels to compensate. When braking or driving downhill, the vehicle's weight shifts towards the front, reducing rear wheel traction. The transmission again compensates by sending torque to the front wheels for better steering control and braking performance. If the automatic is placed in Reverse or "1st" gear, the transmission divides the torque 50-50 to both front and rear wheels. 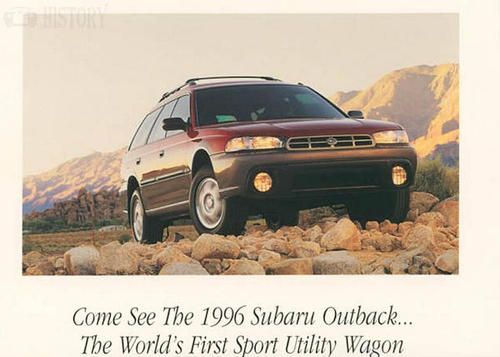