The Studebaker Gran Turismo Hawk (or GT Hawk ) was a sporty coupe that manufactured the Studebaker-Packard Corporation from 1962 to 1964. It was the last development of the Hawk series , which began in 1956 with the Golden Hawk .

The styling of the GT Hawk was a pretty radical facelift that designer Brooks Stevens attributed to the old hawk form; Stevens wanted a European-style car with clean lines, and he named it Hawk Monaco (the prototype even had Monegasque license plates!). The bonnet of the earlier models was preserved, but got a more pronounced radiator .Despite the European influence, the Gran Turismo Hawk also showed American influences: The roofline with its wide C-pillars closely resembled that of the Ford Thunderbird . A chrome trim along the entire length of the vehicle highlighted the upper part of the body in the same way as the contemporary Lincoln Continental . In particular, the taillights were modeled after the Lincoln, and the trunk lid was given a chrome trim (to conceal the notches on the hood, which was taken from the years 1956-1961), which also resembled that of the Lincoln.

Stevens extensive but cost-effective body modifications finally freed the car from the tail fins of the 1950s and the side trim of earlier years. The rear window was almost flat and set back, which reduced its acquisition costs, which were usually very high. Overall, the exterior retained its soft, aerodynamic style of the former Studebaker, but brought it to a contemporary level. 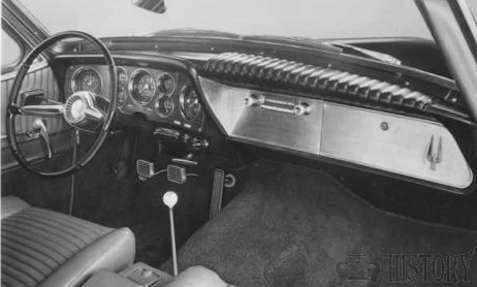 Stevens also redesigned the interior, incorporating a modern dashboard with a row of large, easy-to-read instruments in the driver's field of vision. The upper edge of the dashboard was padded, which protected the occupants from injury in an accident. This dashboard was still a trendsetter by Studebaker; especially later Chryslermodels had dashboards that resembled the Hawk.The GT Hawk had bucket seats and a center console in the front, as in a GT, and all seats were either with a combination of fabric and polyvinyl chloride or even with vinyl only.Unfortunately, the particularly ordered vinyl 1962 turned out to be too low quality and fell rapidly. The problem was solved by fitting the US Royal Naugahyde Vinyl in 1963, but the paired-up vinyl in the 1962 models did not exactly boost the reputation of the cars, which already sold worse than last year.

Due to the precarious financial situation of Studebaker, the lower parts of the car remained as in the previous models. For this reason, there was no difference between the suspension of a GT Hawk from 1962 and a 1953 Starliner / Starlight .Under the bonnet, a Hawk buyer could opt for the 4.7-liter V8 engine in 1962 between the dual carburettor version with 210 bhp (155 kW) and the four-carburettor version with 225 bhp (167 kW) with a manual three-speed gearbox, a three-speed gearbox equipped with overdrive or a Flight-O-Matic (automatic transmission).

From 1963, the Avanti "Jet Thrust" R-series engine designed for the Studebaker Avanti could be ordered for all Studebakers, with the standard R1 providing 240 bhp (176 kW), the charged R2 289 bhp (213 kW) and the supercharged 5-liter engine with full 335 bhp (248 kW). The handling and brakes have been improved to adapt the car to the high-performance engines; There were front and rear stabilizers, rear trailing links, heavy duty springs, and front disc brakes, all packaged in a "Super Hawk" package that was available from the middle of the production year for the cars equipped with R1 and R2 engines. The engine factory Avanti forgave for the Hawk and Lark- Models Serial numbers starting with "JT" (for the R1) or "JTS" (for the R2) and not, as in the Avanti, those with "R" or "RS".

The GT Hawk was a lightweight for an American car of its class and time, and so each of these engines made it a high performance car; the charged R engines only increased the already existing efficiency. Although the Studebaker V8 engines were very heavy for their size, the Hawk was, in the opinion of most drivers, a car with remarkably good handling and safe directional stability.

In 1963, the car was slightly revised and received improvements in front, back and sides. Round parking lights under the headlights replaced the angular ones and were placed in the corners of the new side grilles with rectangular line pattern over a fine mesh. The same line / network structure continued in the radiator grille, replacing the simpler fine mesh of its predecessor. In early 1963, the housing of the parking lights were changed and the right side of the dashboard received a wood imitation pattern, which corresponded to the behind the instruments on the left side. The doors were red-white-blue emblems next to the GT emblems, the rear of the colors of the aluminum panel were reversed and on the trunk lid was next to the Hawk emblem a red-white-blue attached.

The 1964 model of the GT got some major design changes. There was finally enough money for new pressing tools, so that the old trunk lid with their notches could be abolished, which made the chrome trim necessary in the models 1962 and 1963. The new, softer trunk lid was marked "Studebaker Hawk". Also, the grille was changed again, in two points: in the middle of a "Hawk" emblem was mounted and up in the middle of enthroned the new "S in circle" emblem, which all Studebaker models 1964 wore.Perhaps the most interesting change on the outside concerned the upper part of the car: Stevens, who had originally planned for the Gt model a half-vinyl roof, got his will in 1964 finally. There was the new "sports roof" in two different colors (black or white) for an additional charge of 65 US $.

There were also new wheel covers, as with the rest of the 1964 car line, painted spots on the vinyl roof (instead of the holes from 1962 to 1963), new upholstery with silver thread, stronger dashboard upper padding with new dashboard bottom and horizontal folds in the door panels that replaced the previously vertical. In addition, Hawk buyers were able to order a MW / FM radio directly from the factory for the first time.

Andy Granatelli , then President of the Studebaker Paxton Products Division , sent two 1964 Gran Turismo Hawk to Bonneville Flats in September / October 1963 . Both cars, leaving South Bend with regular 289 V8 engines, were fitted with the large 5.0-liter R-series high-performance engines that Paxton produced for Studebaker.In Bonneville, the car with the supercharged R3 engine in September season finished fifth and drove the flying miles at a speed of 251.664 km / h. The car with R4 engine (as a naturally aspirated engine, but equipped with two quad carburetors) was fourth with an average speed of 236.376 km / h.When Granatelli and his comrades returned to the Flats in October, the R3 car drove 246.4 km / h while the R4 car hit 216 km / h several times.In addition to the Hawks, several other Studebakers were traveling in Bonneville during this time. The company's cars earned 72 USAC declarations in September and increased the number to 337 in the following month. Most records were won by the Daytona convertibles based on the Lark, but the Hawks also made an excellent impression.

Impressed with their performance, Dick Passwater , a well-known USAC and NASCAR driver in the 1950s and 1960s, bought the Granatelli R3 car after the Bonneville races. Passwater convinced Studebaker to support him financially and reported the car to the Yankee 300 race in 1964, as well as to several other races and even some off-road driving. The car won the biggest success at Yankee 300, where Passwater was tenth, despite having problems with the brakes that forced him to finish the race prematurely.

Studebaker considered the GT Hawk a European-style car, and so it was sold in Europe and other parts of the world, albeit not in large numbers. The cars for the UKand Australia were right-hand drive.In the home market, the sale was tough, but in the US 8388 Hawk (plus 947 pieces abroad) were sold in 1962. In 1963, sales fell by more than half to 4,009 pieces (US) and 625 pieces (export). The shortened sales year 1964 ended after 1.484 copies for the USA and 283 pieces for the export, all in the calendar year 1963.