The Studebaker Golden Hawk was a two-door hardtop with no B-pillar ,manufactured by the Studebaker in Indiana .It was built from 1956 to 1958,and was the last Studebaker in front of the Avanti , whose styling was influenced by the famous design office of Raymond Loewy .

The Golden Hawk had the basic shape of the models Champion and Commander Starliner ; however, a large, nearly vertical honeycomb grille was added, as well as a higher bonnet line in place of the earlier beveled nose, a taller boot lid and tail fins.This grille and raised cowling were needed to accommodate the large 5.8-liter V8 engine from Packard with a power output of 275 bhp (202 kW). This big, powerful machine in such a lightweight car gave the Golden Hawk a phenomenal power to weight ratio for its time. Of all American production cars in 1956, the Golden Hawk had the second lowest power to weight and had to defeat only the Chrysler 300 B - and the more expensive Chrysler was after all a road-going sports car NASCAR series. The Golden Hawk, like the Chrysler 300 B, can be considered a forerunner of muscle carsthe 1960s apply. The heavy machine earned the car the reputation of being top-heavy and hard to drive, but contemporary testing proves the opposite. The Speed ​​Age magazine tested the Golden Hawk in July 1956 against the Chrysler 300 B, the Ford Thunderbird and the Chevrolet Corvette , with the Golden Hawk outperforming the others in acceleration from 0 to 100 km / h as well as in the times for the quarter mile. The highest acceleration was the magazine with 7.9 sec. / 0-100 km / h and the maximum speed of over 200 km / h. Movie enthusiasts remember a demonstration of these values ​​by Charlie and Raymond Babitt ( Tom Cruise and Dustin Hoffman) in the 1988 film Rain Man .

There was a wide selection of colors (including two-tone paint, according to the contemporary tastes). In the case of two-tone paintwork, the front upper part of the body, the roof and the rear end panel were painted in contrasting color at first, the rest of the body in the base color. From the end of 1956, the body above the waistline and the trunk lid were painted in contrasting color, while the rear end panel, the roof and the body parts below the waistline were kept in primary color.

An expanded list of options and less basic equipment helped keep prices down compared to last year's Studebaker President Speedster, which the Golden Hawk replaced. Even flashing lights were only available as an option.The Golden Hawk came out with three other models of the Studebaker-Packard-Hawk 1956 series , all of which were developed from models of the regular Studebaker model range: the Flight Hawk coupe was a champion , the Power Hawk coupe was a Commander and the Sky Hawk - Hardtop was a president .

The Golden Hawk was rebuilt in 1957 and 1958, but with some changes. The Packard plant in Utica, Michigan , was leased to Curtiss-Wright in 1956 and then sold, putting an end to the manufacture of the original Packards. Studebaker wagons with Packard logos existed for another two years. The Packard V8 engine, which was introduced in 1955, was therefore no longer available and was replaced by the 4.7 liter "Small Bloc" V8 from Studebaker in conjunction with a McCulloch compressor , which - like the Packard engine - developed an output of 275 bhp (202 kW), but weighed 82 kg less. This improved handling and top speed of the car, making it the fastest Hawk until the release of the GT Hawkmade with Avanti compressor in 1963.

The styling also changed slightly. The hood got a fiberglass scoop and an opening in the hood underneath to make room for the supercharger, which was mounted on top of the engine. The tail fins grew larger and were concave on the sides, which were painted in contrasting color and crowned with chrome trim. The 1958 Golden Hawk had 14 "wheels instead of the usual 15", which put the car a little lower. Other changes did not occur.

The other models of the Hawk series were completely changed in 1957: The new Golden Hawk replaced its predecessor and the Sky Hawk, the new Silver Hawk was the successor to the 6-cylinder Flight Hawk and the 8 -cylinder Power Hawk.In the mid-1957 model year, a luxurious 400 model was introduced, blessed with leather trim, a carpeted trunk, and special exterior trim.

Like many other expensive cars, the Golden Hawk also suffered from the recession of the late 1950s, and after just 878 sales in 1958, the model was discontinued. From then on the Silver Hawk remained the only Hawk model; In 1960, it was simply sold as Studebaker Hawk . 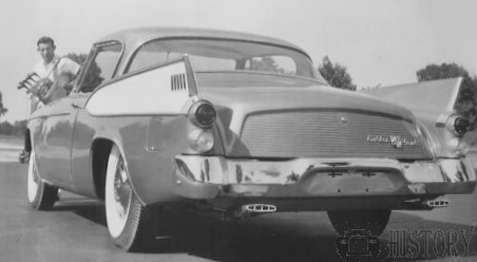