The first version of the vehicle was built in 1940 by Standard Motor Company at the instigation of Lord Beaverbrook, then Minister of Aircraft Production (hence the name Beaverette). It was based on commercial car chassis, on which a simple riveted armoured hull was mounted. The 11mm of steel was backed by 3 inch thick oak planks. The hull was open at the top and at the rear. The armament consisted of Bren light machine gun which could be fired through a slot in the glacis armour. Subsequent versions received all-around protection and a machine gun turret - an enclosed one with Bren MG or an open-topped one with twin Vickers machine guns. Some vehicles also carried Boys anti-tank rifles. Some had No. 11 or No. 19 radio set. The production was stopped in 1942. About 2,800 units were delivered. 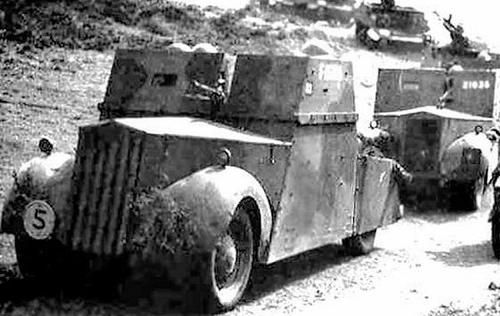 The Beaverette was used by the British Army and Royal Air Force for home defence service and training. The vehicle is said to have suffered from excessive weight and to be hard to handle.