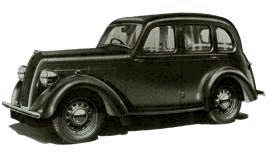 The Flying Ten was a replacement for the earlier Ten with the semi-streamlined look of the Standard Flying range. The side-valve 1267 cc long stroke (100 mm) engine had a single Zenith carburettor and could produce 33 bhp (25 kW) at 4000 rpm. Drive was to the rear wheels through a 3-speed synchromesh gearbox.

The suspension was conventional at first with a solid front axle but this was upgraded to an independent set-up at the front with a transverse leaf spring in 1939. A top speed of around 65 mph (105 km/h) was attainable.

Brakes were cable operated using the Bendix system. In early 1941, 150 four-doors were built for the military, after civilian production had ceased.

A sportier version, the Light Flying Ten was also made.