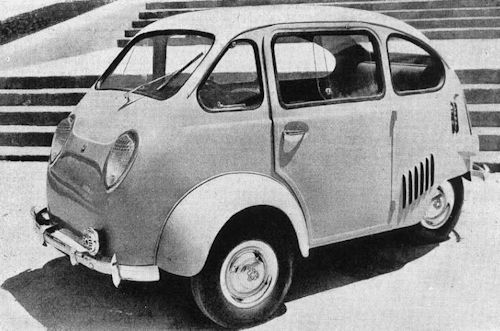 Triver was a Spanish microcar brand.

The company Construcciones Acorazadas SA in Bilbao  began in 1954 with the development Prototype and in 1957 with the production of automobiles. In 1960 the production ended after about 75 cars made. A vehicle still exists.

The company produced two different small car models. The bodies were made of 3 mm thick metal and could accommodate two adults and two children.

The first model was a tricycle with the single wheel at the back. The drive was provided by an air-cooled two-cylinder two - stroke engine manufactured by Construcciones Acorazadas SA under the type designation EMB as a boxer engine . 60 mm bore and 60 mm stroke with 339 cc displacement . The power was 14 hp .  The maximum design speed was indicated at 60 km , a wheelbase of 160 cm, the vehicle length was 265 cm and the vehicle height 137 cm.

The later model had four wheels, but externally resembled the tricycle. The two-cylinder engine of Hispano Villiers had 500 cc capacity and made 14 to 16 hp. The top speed was 78 km / h. The track width was 126 cm at the front and only 54 cm at the back. Despite the shorter wheelbase of 154 cm the vehicle was 267 cm slightly longer than the tricycle. The width was 146 cm, the height 140 cm.