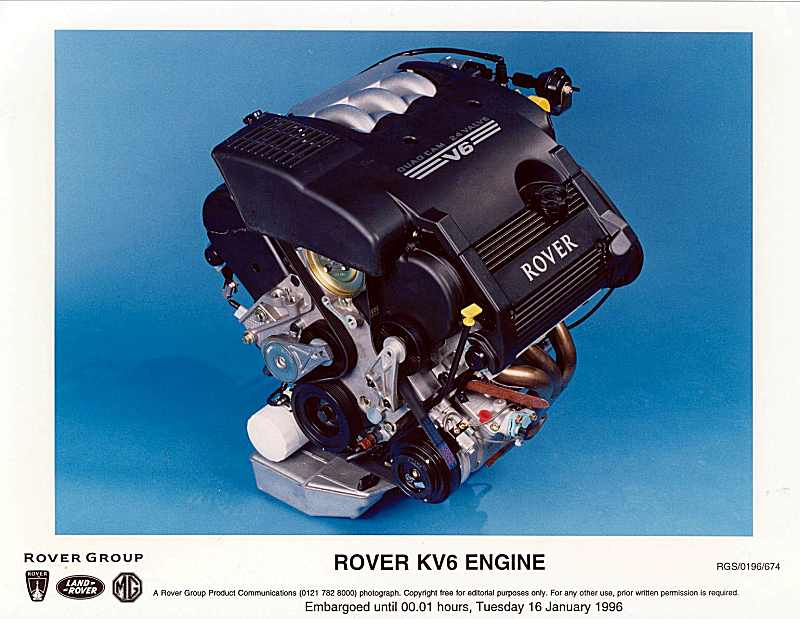 The KV6 automotive petrol engine has a 24-valve quad-cam V6 configuration, and a pressurising variable intake system (VIS) to add hot spots throughout the rev range. Variants exist in 2.0-litre and 2.5-litre capacities. These were built initially by Rover Group, then by Powertrain Ltd (a sister company to MG Rover). KIA manufactured KV6 in Korea under license. Manufacturing moved from the UK to China in 2005, and the product re-designated NV6.

First introduced into the Rover 800 series with the 1996 facelift, including the flagship Rover Sterling Saloon and Coupe models, it has since also powered the Rover 75 and its sister car, the MG ZT, as well as the Rover 45 and the MG ZS.

The engine was designed and developed by Rover at Longbridge to replace the Honda 2.7l V6 engine which was about to become non-compliant with tightening emissions legislation. The original unit was designed for low volume production but was later redesigned to fit into the smaller Rover 75's bonnet, although performance remained similar.

In 1994 the engine was licenced to Kia Motors who invested in a new plant at the Asan Bay complex to build the engine. This engine was used in several Kia vehicles. Its introduction in Korea shortly followed its use by Rover in the Sterling.

At introduction, the engine enjoyed considerable technological advancement compared with its competition, most notably being the lightest and shortest v6 in its class. It has fully automatically tensioned drive belts and adaptive Siemens EMS2000 engine management. The fuelling and ignition timing are constantly varied to match the load on the engine to improve refinement. The engine boasts Variable Geometry Induction, whereby air induction pipe lengths vary to optimise engine torque in response to different engine and road speeds, aiding refinement and efficiency. Although it bears the name of K Series, the engine has almost no components in common with the 4-cylinder version.

One of the most immediately noticeable features of the first V form engine to be designed by Rover for decades is its distinctive, quietly growling engine note.

The V6 engine is fitted with four overhead camshafts driven by synchronous tooth belts. It has a single, long, serpentine belt at the front driving the inlet cams and also the coolant pump. The exhaust cams are driven by short link belts driven from the ends of the inlet cams at the rear of the engine. The system was a joint development between Dayco (belt supplier) and Rover. The rear link belts do not incorporate any tensioning device. Belt tension is maintained by very careful control of belt length and the pulley pair is pre-tensioned during fitting. The front belt drive is tensioned by a spring-loaded tensioner pulley incorporating a hydraulic damping element.

An unusual feature of this system is that it incorporates "floating" inlet cam drive pulleys that are not directly keyed to the shafts. This means that special setting tools are required to establish the cam timing before the pulley fixings are tightened. This requirement is the result of the complexity of the cam drive train. In addition to the length and thickness tolerance of the belts, the accuracy of the cam timing is also affected by the positional and diameter tolerance of each pulley and the thickness of each major engine casting. The result is that the required degree of timing accuracy could not otherwise be maintained.

Early hand-finished units were affected by inconsistent production tolerances (1996-1999). This caused the height of the cylinder liners to vary, which risked over-compression or under-compression of the head gaskets. The production facility was re-engineered prior to launching the Rover 75 (1999-2005). Those changes resolved all known issues and the KV6 has a positive reputation for reliability.

The 1999 redesign of the KV6 by Rover Group under BMW included replacing the original metal inlet-manifolds and butterfly valves, with plastic units manufactured in Germany. The redesign also involved replacing the metal thermostat housing with a plastic unit. A costly but uncommon side-effect to using plastic components are breakages in the butterfly valves that are mounted inside the non-serviceable inlet manifold, as well as perishing thermostat housing that can lead to loss of coolant. A third common fault is wear in the VIS motors that are mounted on the sides of the inlet manifold and control air intake. Damage to the butterfly valves and/or VIS motors is limited to causing excessive noise and/or minor loss of power.

A Kia manufactured variant of the engine was also fitted to the Kia Carnival (people mover) with some problems on early model engines. A large percentage of first generation (1999 - 2005) Kia Carnivals sold in Australia required a new enginesome multiple engines. In most cases KIA provided a reconditioned short (without transmission) engine free of charge and with no questions asked, providing the vehicle was under warranty.For those outside warranty, Kia "covered costs proportional to what should have been the full expected life of components" and charged for labour and consumables.