The Renault Fuego ("Fire" in Spanish) was a sports car produced by French automaker Renault from 1980 to 1995, replacing the Renault 15 and 17 coupés of the 1970s. It was marketed in the United States by American Motors Corporation (AMC), as well as assembled in Argentina.

The Fuego's exterior was designed by Michel Jardin, working under Robert Opron (who had previously designed the Citroën SM, Citroën GS, Citroën CX, and later followed with the Renault 25 in 1984).

The Renault Fuego was heavily based on the Renault 18, sharing its floorpan and drivetrain, but featuring a new front suspension design developed from the larger Renault 20/30. The design kept the familiar double wishbone layout common with the Renault 18 but no parts were interchangeable and the design incorporated negative scrub radius geometry. The new suspension design would later be introduced in the facelifted Renault 18, and with minor refinements (larger bushings, etc.), it was used in the Renault 25. In 1984, the Fuego dashboard was added to the facelifted R18. European production continued into 1986 (to 1985 in France and 1986 in Spain), while Renault Argentina produced the Fuego from 1982 until finally ending production in 1995 with the 2.2 litre "GTA Max" (the final phase III facelift introduced in 1990).

It was the first mass produced four-seat sports model to be designed in a wind tunnel (with a resulting drag coefficient (Cd) factor of 0.32-0.35 depending on model and year). In October 1982, the Turbo Diesel model was classified as the then-fastest diesel car in the world with a top speed of 180 km/h.

The Fuego was the first car to have a remote keyless system with central locking that was available from the 1983 model year (from October 1982). The system was invented by Frenchman Paul Lipschutz (hence the name PLIP remote which is still used in Europe), and later introduced on other Renault models. The Fuego was also the first car to have steering wheel mounted satellite controls for the audio system (European LHD GTX and Turbo from October 1983). This feature became popularised on the new 1984 model Renault 25.

A convertible version was unveiled by the French coachbuilder Heuliez in 1982, but never made it to production due to cost - the R11/Alliance convertible taking its place. 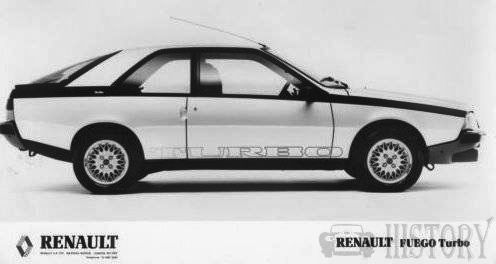 European model variants ran as follows: 1.4 litre TL, GTL; 1.6 litre TS, GTS (manual and automatic transmissions); 2.0 litre TX, and GTX (manual and automatic transmissions). A 2.1 litre Turbo Diesel was also produced for LHD European markets in the 1982-84 period. The Fuego Turbo (manual transmission only) was added in 1983 to coincide with the midlife facelift. This included a new front grille, bumpers, wheel design, interior trim and a revised dashboard on LHD models. In the United States, the Fuego was offered with a 1.6 litre turbocharged or normally aspirated version in 1982 and 1983; for 1984 and 1985 it was offered with a 2.2 litre engine.

The Fuego became the number one selling coupé in Europe during the years 1980 through 1982. The official Renault website states that a total of 265,367 Fuegos were produced. In France (thus, excluding Argentina and Spain) the number produced from 1980 to 1985 was 226,583.

While being reasonably well specified for a vehicle of that time, the Fuego was also available with a number of options including leather upholstery, multi-function trip computer, cruise control, air-conditioning (either factory fitted or a dealer installed option with thermostat control), and a full length Webasto electric fabric sunroof.

The Fuego was sold in the United States through American Motors (AMC) dealers from 1982 to 1985 inclusive. It was "a nicely executed sports coupe" and was to be Renault's "halo" car. The car featured distinctive styling, comfort for four passengers, delivered superior fuel economy (the U.S. EPA rated it at 39 mpg-US (6.0 L/100 km; 47 mpg-imp) in the highway), economical to purchase (base price of $8,495 at its introduction), and the model received good reviews in the automotive media. However, it did not achieve high sales and turn Renault's fortunes around in the United States. By 1984, AMC dealers were eligible for rebates of $300 and $1,000, respectively, on each imported Renault Fuego and Fuego Turbo model they sold. Also, the American "Federalisation" of the vehicle received negative reactions from the original design team due to the enlarged bumpers, sealed beam headlights, and Americanised colour/trim choices.

Renault sold the Fuego in the UK, aiming it at Opel Manta and Ford Capri buyers, where it became the top selling coupé during 1981-82, but sales fell off before finally ending in 1986 with just the GTS and Turbo as the two sole models.

The Fuego was not directly replaced by another model in the Renault range. A Fuego II was planned, similarly styled as the new Renault Alpine GTA, but the development of the new model was cancelled at the last minute due to Renault's financial problems and the falling sales of sports coupés in general at that time.

Renault Fuego used in A View to a Kill for transport of the Bond Girl.