The Renault Juvaquatre is a car of the French car manufacturer Renault , marketed between 1937 and 1960.

The political and social situation of the mid-1930s in Europe was at least tense: the countries of the Old Continent watched with some anxiety the will of some leaders to expand their "living spaces" as advocated by Adolf Hitler . Louis Renault thought that a suitable policy could maintain relaxed relations with Nazi Germany. He has been present at all the German car shows where he exhibited the models of the brand marketed in addition to the Rhine. The boss of the manufacturer of Billancourt made remarkable visits to the Berlin Motor Show of the years 1935, 1938 and 1939. It is during the show of 1935 that Louis Renault notices on the stand Opel, a car that will greatly impress him, the Opel Olympia , to the point of noting down to the smallest detail the innovative aesthetic qualities for the time and for him in particular, which has always been very conservative from this point of view. He had been admiring how the headlights were integrated into the front panel. Renault, which had until now composed its range mainly with models of middle class, high-end and luxury, with the Juvaquatre, was going to launch its first low-end model.

Competing with the Amilcar Compound , Peugeot 202 , and Simca 8 , it is the first Renault with a monocoque body (no separate chassis ) and independent front wheels, the front suspension is transverse leaf spring with hydraulic shock absorbers lever forming two upper triangles . It is the only car of the brand conceived in the time of Louis Renault whose production was continued by the Régie Nationale des Usines Renault after the Second World War .

Presented at the Paris Motor Show of October 1937  , the Juvaquatre is very largely inspired by the German Opel Olympia , which will be worth to Renault a plagiarism suit. It is marketed from 1938 in the form of a 2-door coach but the beginnings are very difficult because the customer blames him for his lack of character, his handling very imprecise and two doors incompatible with his family vocation. The car is selling very poorly while the Peugeot 202 and Fiat-Simca 8 are selling very well and at a higher price.

A utility version is quickly studied to meet demand end 1938, the front of the car being and remaining identical for all models from the beginning to the end of the 1937-1960 production.

The Juvaquatre will be available in 1939, sedan 4-door with doors hinged on the central amount called "suicide doors" and with a non-opening trunk. Some "luxury" models will come out in coupe or discoverable versions. Sales of the small Renault finally seem to start when the declaration of war stops net production, the factory having to convert to produce military equipment to satisfy the war effort.

During the Occupation , some gas generator models were produced as well as an electric prototype (BFKE). From 1940, the brakes become hydraulic on all types, the Juvaquatre is proposed in 4-doors with finally a safe accessible from the outside while remaining the only sedan in the catalog of the young Régie Renault until the arrival of the 4CV that marked the end of the Juvaquatre sedan.

The new Renault (4cv, Dauphine) being all built with rear engines, their transformations in utility is impossible, which explains the longevity of the Juvaquatre, which experienced regular improvements like the assembly of the engine of the Renault 4CV in 1953, then engine from the Renault Dauphine from 1956, which will lead to the adoption of the name "Dauphinoise". In its version break, this model will experience some popular success in terms of its attractive price and its practical qualities. Its production will end on 1 st March 1960 at the Renault Flins plant where it will be marked in 1952, the debut of the new plant. His successor will be the Renault 4 L.

If we know that the Juvaquatre was largely inspired by the German Opel Olympia , which earned Renault a trial for plagiarism whose we do not really know the result. Some rumors report an amicable "agreement" with a large compensation paid to the American giant General Motors who would not want to involve its subsidiary Opel in a trial in Nazi Germany.

The AEB1 coach version concerns only the pre-production and 34 final copies that have been entrusted to the main dealers to carry out tests in condition. 40 defective points were reported: bumper too small, humming bridge, parts that touch in the engine compartment, unsatisfactory braking, comfort perfectible .... This forced Renault to make changes and launch the final version ABE2 which will not be put into production until March 31, 1938 and marketed in the early summer of 1938.

The steel body of the Juvaquatre was subject to a license fee that Louis Renault failed to circumvent. Renault was forced to pay a $ 2 fee to Edward Gowan Budd for each saloon produced and $ 1 for each convertible manufactured by SAPRAR.

Some of the Juvaquatre features provided 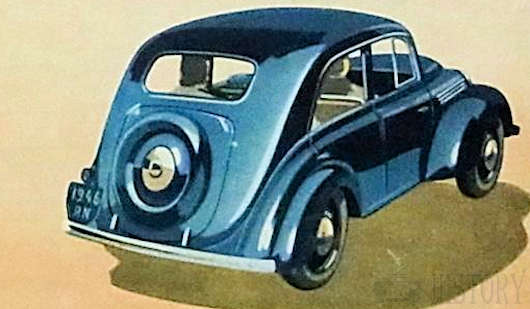