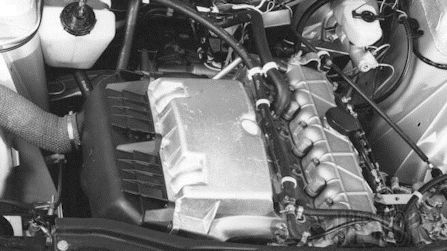 The Douvrin engine is a four cylinder - internal combustion engine for automobiles , which from 1977 to 1997 by the La Française de Mécanique was made, a joint venture between Renault and PSA Group (Peugeot). This is also called J-engine.

The engine is water cooled. Engine block and cylinder head are made of aluminum . The crankshaft is 5-times stored. The camshaft is in the cylinder head and is driven by a toothed belt. The engine was built as a petrol engine and for diesel fuel , with 8 and 12 valves . There were also versions with turbocharger. The displacement is 2.0 or 2.2 liters.

The Douvrin engine was introduced to the press in 1977. Chief developer was Jean-Jacques His , who was also the father of Formula 1 engines, with which, among other things, Ferrari was equipped. One of the first cars with the Douvrin engine was the new Renault 20 TS . In 1979, the Société Française de Mécanique introduced the first diesel engine, type J8S, which was first used in the Renault 20 .

The commercial vehicles Renault Trafic and Renault Master Master got the 2.0-liter engine with a simple carburetor as the J5R. The last Trafic until 1997 got a J7T with only 101 HP.

The end of the Douvrin engine came with stricter pollution laws.

Peugeot has used the Douvrin engine in the Peugeot 505 and the Citroën CX (Reflex, Athéna, Leader, 20RE, 20TRE and 22TRS models); This got a double carburetor. Also, the Talbot-Matra Murena should be equipped with the engine, but Renault has ultimately decided against it, since the engine should be used instead in the new Fuego .

The Douvrin diesel engines (J8S) were not used by Peugeot.