The Plymouth Valiant is a mid- size car that was manufactured from 1959 to 1976 by Plymouth , the junior brand of the third largest American automaker Chrysler .

The model policy task of the Valiant was the same as in the almost simultaneously presented competitors models Chevrolet Corvair and Ford Falcon . During the 1950s, the American cars were getting bigger and heavier. This was in line with the wishes of a large part of the clientele, but the major American manufacturers had thus created a gap in the market, that of the American Motors Corporation and import vehicles, first and foremost the VW Beetle, was filled. The sales success of AMC and VW in the late 1950s was so great that it could no longer be overlooked. The major American manufacturers finally responded in the fall of 1959 almost simultaneously with the introduction of their compact cars. 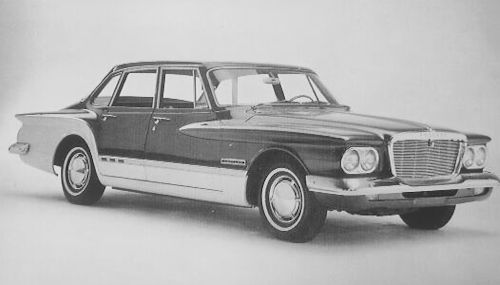 With the new Valiant, Plymouth was not as brave as Chevrolet, but bolder than Ford. The Valiant was quite conventionally equipped with a front-engine and rear-wheel drive, but its bodywork showed a style of its own that took some getting used to. It turned out, however, that Ford had the bigger success with the sleek and unfussy Falcon. Originally, Plymouth wanted to call his new model "Falcon" like the concept car of 1955, but Ford had already secured that name for its compact model. In the first model year, the Valiant ran as a separate brand, only from 1961 he was assigned to Plymouth.

The Valiant has, in contrast to many other American vehicles of this time on a self-supporting body . It is powered by a front-mounted, "Slant Six" said six-cylinder in-line engine. The name "Slant" indicates the installation position inclined by 30 ° to the side. At the beginning, only a variant with 2.8 liters displacement was available. From the model revision 1962, a variant was also offered with 3.7-liter displacement.

The dealers of Dodge , the second volume brand of the Chrysler Group, also wanted to participate in the growing demand for more compact cars. Thus, in 1961 and 1962, a slightly modified sister model of the Valiant under the name Dodge Lancer on offer.

In Switzerland , the Valiant was built as early as 1960 at the AMAG assembly plant in Schinznach . With the slogan "ASSEMBLY SUISSE - added value by Swiss assembly" the vehicles were marketed quite successfully. The parts came mostly from the US, but windows, carpets, seats, coolers and the like came from Swiss production. The assembly in the US took about 6 hours mainly in assembly line production , but in Switzerland it was an impressive 148 hours of manual labor. In 1972, the last Valiant were mounted. In addition to the Valiant, which was called as in Australia Chrysler Valiant, Dodge Dart and Lancer, Valiant Coupe and the Dodge VIP.