The development of the Opel GT began in the winter of 1963 with the production of design studies in plasticine , and at the IAA 1965, a prototype was shown under the name Opel GT Experimental . The car should serve primarily as an image carrier of the General Motors (GM) Group. The possible introduction of a GT - sports car from Opel at the time sparked as much astonishment as enthusiasm, because a sports car did not meet the previously staid brand image of the Rüsselsheim automaker. However, Opel did not say anything about the actual realization for a long time.

On the occasion of the opening of the test and development center in Dudenhofen , an Opel GT was released for a test drive before the eyes of the car press. After that, the technique of the vehicle was set. She came from volume: underbody , suspension and the 1.1-liter engine were the Kadett B taken; the 1.9-liter CIH engine came from the Opel record C . The latter fit only with a bulge of the hood in the car. Because of the small space had to be bevelled in this engine, the cylinder head cover in the front area.

However, the management of Opel was faced with the problem that no capacity was available for the new vehicle. A small series of 30,000 pieces per year, which corresponded to about a tenth of the cadet production, could not easily be inserted into one of the existing works. That's why Chausson's bodywork was made in Gennevilliers (France), while Brissonneau & Lotz in Creil (France) did the painting and interior work. The finished bodies were delivered to the Opel plant in Bochum, where they received engine, transmission and axles. .Characteristic for the model were the door openings, which were pulled far into the roof, the so-called Coke-Bottle-Shape or the fender swivels reminiscent of a Coca-Cola bottle and the folding headlamps . The shape of the doors allowed a relatively comfortable entry and exit despite the low height of the car of 1.23 meters.

The folding headlights were extended and retracted with a lever placed on the center tunnel. In addition, the GT had under the front bumper two small headlights for high beam and flasher. The extended folding headlamps affected the Windschlüpfigkeit the body and slightly reduced the possible maximum speed of the car. The Opel GT was a two-seater without a trunk with a flat luggage rack behind the two seats, which can only be accessed from the inside of the car. The folding seat backs were extended upwards to catch any slipping luggage. 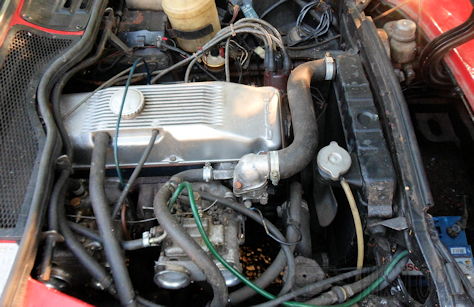 More than half of the total production was shipped to the United States , where the GM subsidiary Buick took over the marketing under the maintenance of the brand name Opel. After Opel had previously been hapless with the sale of the very successful sedans in Europe in the US, the GT was there very soon accepted as a real sports car and had a fast-growing fan community. There was the Opel GT as a small Corvette ("Baby Corvette"), which had been designed by the same design team. 1973, the production of the Opel GT was discontinued. The reasons for this are manifold: Firstly, after the acquisition of the automobile division of Brissonneau & Lotz by the Société des Usines Chausson, which worked closely with Renault , the supply contracts for the OPEL GT bodies were terminated due to competition with the Renault Alpine A110 , on the other hand, new safety regulations came into force in the US, the u. a. prescribed special bumpers that would be difficult to reconcile with the shape of the GT. It is always the subject of discussions among GT enthusiasts, whether GM continued the production despite the great success, because the Opel GT contested the also originating from GM Corvette market share in the US. It is clear that the GT was very popular in the GM home market; actual cannibalization effects but can be doubted because the Corvette was much more powerful and expensive.

A repeatedly discussed convertible - or a Targa model of the Opel GT did not go into series. Likewise, there was no production of a direct successor model, the "Opel GT 2" or "Opel GT 2 + 2". The fact that the Opel GT has a large construction close to other Opel models facilitates conversions, for the 2.2 -l or 2.4 -l engines of Opel Rekord or Omega, injection engines from Manta or Ascona and 5-speed gearboxes of various Opel types are suitable. The advertising campaign for the Opel GT produced the slogan "Only flying is more beautiful", created by commercial artist and author Carolus Horn . Before its launch, the Opel GT completed a crash test , which was not self-evident at the time . At an impact speed of 50 km / h , the passenger compartment remained largely undeformed.In 2003.

30 years after the end of production of the first GT, Opel announced to revive the name. 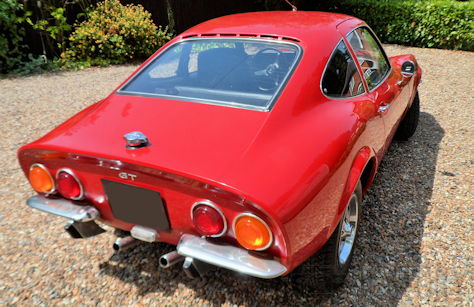