The Opel GT was introduced in March 2006 as the successor to the Opel Speedster at the Geneva Motor Show and was voted Convertible of the Year 2007 by an independent expert jury .The GT is based on the platform of front engine, rear drive of the Opel parent company GM , on which also build the nearly identical Saturn Sky , Pontiac Solstice and Daewoo G2X . These vehicles and the Opel GT were built in Wilmington, Delaware . The Design Director of General Motors, Franz von Holzhausen, is responsible for the design of the Kappa platform .

The Opel GT is 4100 mm long, 1813 mm wide, 1274 mm high and has 2415 mm wheelbase. The empty weight is up to 1406 kg, however, significantly higher than the Speedster Turbo (930 kg tare weight). The standard equipment includes a manual soft top, manual air conditioning , a manual 5-speed gearbox and a limited slip differential with up to 70% blocking.The wheels are suspended on double aluminum wishbones on both axles. The front-rear weight distribution is almost optimally balanced at 51: 49.The driving behavior is monitored by the four-stage electronic stability program ( ESP ), in Opel: ESC (Electronic Stability Control) in the following modes are selectable:Normal, without display (ESP on, traction control , in Opel: traction control on),ASR off (ESP on, traction control off),Sport mode (ESP intervenes later and allows for larger drift angle, traction control) andESC off / ASR off (ESP off, traction control off). Another feature of the chassis is a torsion support between the transmission and rear axle, which absorbs load change reactions during acceleration and braking.

The fabric hood can only be operated manually. After the electric release of the fins and the top cover, the roof can be unlocked manually and folded up. For stowage, the driver must leave the vehicle, manually open the unlocked convertible top lid, lower the roof in the roof space and close the convertible top flap again. When closing two additional fins must be manually folded down and locked in openings of the convertible top lid.With no significant trunk is not available, so the vehicle is designed solely for driving pleasure and in no way on everyday practicality.The Opel GT was available in the colors onyx black, midnight blue, solar yellow, metal gray, damask silver, granite gray, Eifel blue and Victorian red. A "premium package" (partial leather interior of the seats in ebony or kobal red / ebony black, made of PVC: seat backs, headrests and door panels, and CD changer )

The plant in Wilmington was closed after 107,658 vehicles produced on July 31, 2009, which also stopped the production of the Opel GT. 7,519 vehicles were manufactured. 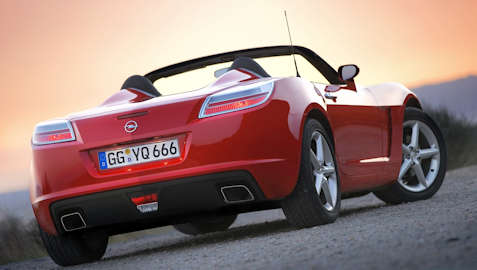