The Opel Kadett C is a small family car which was produced by the German automobile manufacturer Opel from 1973 to 1979. The Kadett C, which was the third generation of the Opel Kadett, was released in August 1973,and was Opel's version of the General Motors' "T-Car". It was the last small Opel to feature rear-wheel drive, and remained in production at Opel's Bochum plant until July 1979, by which time Opel had produced 1,701,076. Of these, 52% had been exported outside West Germany, most of them to markets in other parts of western Europe. In other world markets however, various badge engineered versions of the Kadett C remained in production as late as the mid 1990s under other GM brand names.

The body of the Kadett C was seen as being less lumpy and better proportioned than that of the Kadett B. In terms of overall dimensions, however, the two were actually very similar.

Most customers opted for the "Limousine" bodied saloon/sedan car which came with two doors. A four-door "Limousine" was produced mostly for export to markets where cars of this size with only two doors encountered customer resistance. In West Germany itself, however, the small family car market continued to be dominated and defined by Volkswagen for whom two doors in a small family car was still quite sufficient: the four door Kadett C is remembered in Germany as an "export special". The Limousine body accounted for just under 63% of the Opel Kadett Cs produced. A further 11% were three door estate-bodied cars badged, following Opel tradition, as the Kadett Caravan, with the two-door coupés accounting for slightly under 10%.Publicity of the time, possibly originating with Mercedes-Benz, indicated that in order to minimize the risk of fire in the event of collision, the safest position for a car's fuel tank was above the rear axle between the passenger cabin and the boot/trunk, and this is where the Kadett C "Limousine" and "Coupé" had their fuel tanks fitted, accessible for replenishment via the (unexpectedly, hinged,) extractor vent on the car's right-side C-pillar. On the "Caravan" bodied estate car the fuel tank was a flatter shape, and was positioned under the rear cargo area. 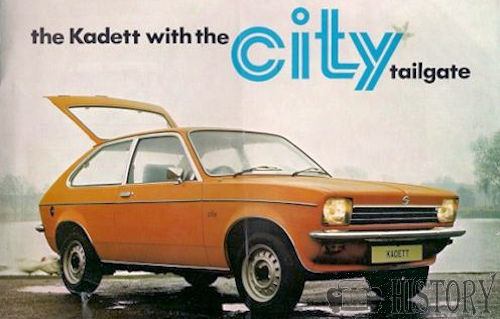 At the end of May 1975 the "Kadett City" was added to the range. This was a three door hatchback intended to compete on price (though not on space efficiency) with the Ford Fiesta, launched in Germany in the same month. The concept had first originated on the Kadett C's Vauxhall sister car the Chevette which was launched first. The unique panelwork for the Kadett City was in fact produced at Vauxhall's Ellesmere Port plant and exported to Bochum for assembly into finished bodyshells. The Kadett City sat on the same wheelbase as the other Kadett Cs, but the rear overhang was shortened. The fuel tank was positioned under the floor of the luggage compartment at the back, as on the Caravan bodied cars, but the fuel tank on the "Kadett City" had a capacity of only 37 litres as against 43 litres for the slightly longer "Kadett Caravan". Both models featured rear seats that could be folded forward to give a long and relatively unimpeded load area. 263,090 "Kadett City" bodied cars were produced, representing more than 15% of the Kadett Cs produced by Opel, Germany.

Exhibited at the Geneva Motor Show in March 1976, and included in the range from that year was the Aero-Kadett, an open-top Kadett with targa roll bar, detachable roof insert and a separate convertible top aft of the roll bar (like the contemporary Lancia Beta Spider). This car was built in limited numbers by Karosserie Baur in Stuttgart. Removing the removable parts of the Kadett Aero's roof was a cumbersome process and the manufacturer's recommended retail price was very much higher than that asked by Volkswagen for their 1303 Cabriolet. The Kadett Aero struggled to find buyers, and was withdrawn early in 1978 by which time 1,242 had been produced. Several decades later, however, the rarity of the Kadett Aero is one of the features that helps it to draw continued interest from old-timer enthusiasts.

The 1.2 litre unit powered 1,389,940 of the European Kadett Cs, equivalent to almost 82% of the Kadett Cs produced by Opel in West Germany and at their daughter plant in Belgium.

From March 1974 Opel added the a lower compression 1.0 litre version of the engine to the range, this featured the same 993 cc capacity as when first seen in the Kadett A, although now the compression ratio was slightly higher (7.9 :1) than in 1962. Maximum power at 40 PS (29 kW; 39 hp) was also the same as in 1962, though now at a slightly higher engine speed of 5400 rpm. Performance, with a top speed at 127 km/h (79 mph) for the "Limousine" and 122 km/h (76 mph) for the "Caravan" was, by the standards of 1974, distinctly underwhelming with this power unit. Quoted fuel consumption was slightly better than with the 1.2 litre cars, but in terms of overall running costs for the cars there was no corresponding reduction in running costs when choosing the 1.0 engine in preference to the 1.2N. A more powerful "1.0 S" engine was also available in export markets where it suited the tax structure, with 48 PS (35 kW) at 5600 rpm.

Nevertheless, following the 1973 Oil price shock car buyers in western Europe had become far more economy minded. The 1.0 engines fitted in the Kadett B had been reserved for countries in the Mediterranean with punitive car tax levels, but with the Kadett C the manufacturer made cars powered by the smaller unit available to West German domestic buyers. 254,723 Kadett Cs using the 1.0 engine were produced whereas only 10,691 of the Kadett Bs produced had incorporated this anemic motor.

For its first two years the Kadett C was offered with a choice between only the 1.0 litre and 1.2 litre motors, but September 1975 saw a return of the larger Camshaft in Head (CIH) power units to the Kadett range in the form of the Kadett GT/E, inheritor of the Kadett Rallye's mantle. The GT/E's 1897 cc engine had till 1973 featured in the earlier Kadett B range of power units, but now it incorporated "Bosch D-Jetronic" fuel-injection. Maximum output of 105 PS (77 kW; 104 hp) at 5400 rpm was virtually identical to that achieved by the Kadett B with its limited edition "Hoch Leistung" (high power) version of the same engine, but the earlier car had achieved its power level using old fashioned twin carburetors, a fuel feed approach now losing out to fuel injection in the face of increasingly stringent emission regulations.

The car came with a four speed all-synchromesh manual transmission as standard, gear selection being performed using a centrally positioned floor-mounted lever. A five-speed manual transmission was offered as an option on top of the range GT/E Kadetts that appeared in 1975, and became a standard feature of the (now) 2-litre Kadett GT/E in 1977. On the 1.2 S and 1.6 litre engined cars it was also possible to specify the option of a "GM Strasbourg" Turbo-Hydramatic 180 three-speed automatic transmission.

At launch, Kadett Cs powered by the 1.0 litre and the lower compression version of the 1.2 litre engine were delivered fitted with 200 mm (7.9 in) diameter drum brakes on all four wheels. It was possible to specify front disc brakes, which, following an upgrade in January 1975, became standard fittings on all Kadetts. Servo-assistance for the brakes was also initially an option which became a standard fitting - in this case from May 1975 - on these less powerful Kadetts. On cars fitted with the higher compression version of the 1.2 litre engine and on cars with larger engines, the combination of front wheel disc brakes and rear wheel drum brakes, supported by servo-assistance had come as standard equipment from 1973. The brakes on the Kadett C were operated via a twin circuit hydraulic mechanism.

In terms of comfort and equipment, the Kadett C was launched with two available levels of trim and equipment, either as a standard or a "Kadett L" model. In May 1977 these were joined by the "Kadett Berlina", featuring the larger 1.6 litre "S" engine under the bonnet/hood and an enhanced package of trim and equipment on the inside. On the outside the Berlina was distinguished by a discrete chrome side strip along the length of the car redesigned headlights, now rectangular in shape and a little larger than hitherto. The larger headlights appeared to be part of a single unit also incorporating turn indicators now positioned directly adjacent to the lights at the car's front corners. The Opel "Blitz" logo was also larger, and moved from the leading edge of the bonnet into the grille. The new headlights and front indicator flashers were also included from May 1977 on the "L" models, while the standard cars retained the smaller headlamps with which the Kadett C had been launched, along, as before, with turn indicators below the front bumper.

In the Autumn/Fall of 1978 the larger headlights and turn indicators were also applied to the remaining Kadett Cs. 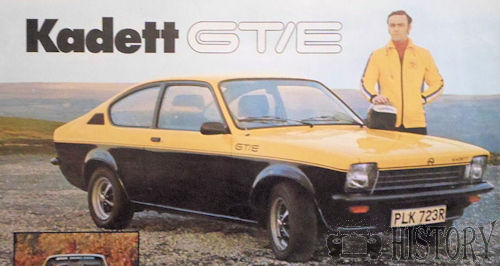 The Kadett C sporting "Coupé GT/E" models appeared in August 1975, a year before the rival VW Golf GTI. The GT/E was priced, in 1975, at 12,950 Marks which was approximately 30% higher than the manufacturer's listed retail price (9,970 Marks) for a "1.2S" powered Kadett coupé. The fuel injected performance coupé now provided a basis for competition cars. Advertising of the time featured an aggressive two-tone yellow and white paint scheme, although it was also possible to specify a conventional "everyday" body colour.

After ten years during which an apparent inability to replace the Beetle appeared to threaten the very survival of the Wolfsburg empire, Volkswagen's Golf, introduced in 1974, and although initially slow to take off in the German car market, was now rapidly evolving into a winner, and for the Kadett C a rival at least as formidable as the Beetle, in it glory days, had been. At the performance end of the small family car sector the Kadett now found itself in a crude power struggle with the Golf GTI, launched in 1975 and energetically defining a new "hot-hatch" market segment. The Golf GTI was launched with 110 PS (81 kW; 108 hp) of power supported by "Bosch K-Jetronic" fuel-injection, a new generation fuel feed system from the specialist supplier that supplied both Opel and Volkswagen. Opel's response to the success of the Golf GTI was the Kadett GT/E, powered by the 1979 cc "20EH" (CIH) unit which had had the compression ratio raised and a resulting increase in maximum power to 115 PS (85 kW; 113 hp). The rear wheel suspension was enhanced through the integration of vertically mounted telescopic gas filled Bilstein shock-absorbers which enhanced road holding and provided a firm "sporting" quality to the ride. 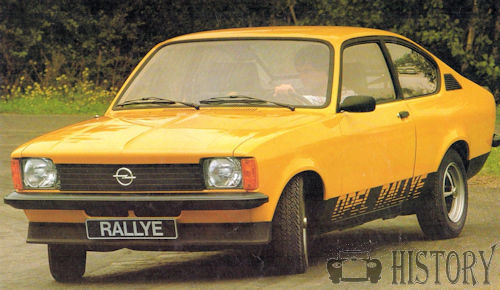 September 1977 saw the return of the "Kadett Rallye" label for a Kadett Coupé that provided seriously superior performance to the "shopping trolley" Kadetts of the time, but was half a notch down from the GT/E in terms of price and of uncompromising performance. The Rallye was offered with a choice between the carburetted "1.6S" and the fuel injected "2.0E" engine, the larger of which at the same time became available in a high performance version of Opel's larger Rekord E. Outputs are 75 and 110 PS (55 and 81 kW) respectively. The rear wheel suspension was enhanced through the inclusion of vertically mounted telescopic shock-absorbers produced by the manufacturer's Spanish component factory.