From 1984 to 1998 Nissan applied the name "200SX" to two different lines of automobiles in different markets these years.

In 1995, Nissan reintroduced the 200SX nameplate in United States and Canada to designate a two-door version of the Nissan Sentra (B14 chassis, a front wheel drive car), known in Japan and Mexico as Lucino, replacing the Sentra coupe and Nissan NX (discontinued in 1993). The 200SX came in base, SE, and sportier SE-R models. All shared their front-end appearance, front-drive chassis, dashboard, and many dimensions with the Nissan Sentra (Japanese: Nissan Lucino). Base and SE editions shared Sentra's twin-cam GA16DE engine 4-cylinder engine. The SE-R inherited the 140-horsepower 2.0 L SR20DE engine used in the previous 2-door Sentra SE-R. All three came with a 5-speed manual transmission or 4-speed automatic, and were equipped with dual airbags. Antilock brakes were optional in the SE and SE-R. The price, new: $14,269-17,549.

1996 Nissan 200SX: The SE and SE-R gained new body-colored mirrors and door handles. 1997 Nissan 200SX: the base model adopted the same interior trim as its SE and SE-R companions. The SE-R was not available in California due to tightening emissions requirements. The oval tailpipe trim changes to round this year, and for 1998 on 200SX SE models. 1998 Nissan 200SX: SE-R returns to California with additional emissions equipement on the SR20DE. All models got new headlights, revised bumpers, and white-face gauges. Also, base models replaced 13-inch (330 mm) wheels with 14-inchers. 200SX did not return for '99 but its 140 horsepower (100 kW) engine continued in the 4-door Sentra SE.

In several markets, including Mexico and Japan, this car was sold from 1996 to 2000 under the name of Nissan Lucino, In Mexico it came with two versions available: GSE for the 1.6 l engine, and GSR for the 2.0 l.

If not for this one car, there would be no confusion, as every other Nissan with a name ending in "SX" refers to a car based on the Nissan S platform.

The B14 Sunny and Sentra appeared in 1994 and were produced till 1998, and featured four-wheel-drive variants. Other than Japan, this variant was produced in Pakistan through a joint venture between Gandhara-Nissan and Nissan Japan till 2001 for the local and export markets.

In this generation, the station wagon was supplied to Mazda under an OEM deal as the Familia Van. The Nissan Wingroad range appeared as a spin-off of the Sunny line in Japan, denoting a highly specified station wagon that replaced the Nissan Sunny California. Both the Mazda Familia and the Nissan Wingroad had different front and rear ends compared to the wagon that was exported.

Nissan Mexico sold versions of this as the Sentra with 1.6 and 2.0-litre engines.

Thailand uses this model of B14 from 1994 until 2000 with a few minor changes along the way. First minor change shows when the rear changes to split the red strip into two sides, next the face changes in a few years with a small ridge i the middle of the hood and a chromium decoration on the hood tip, finally the last minor change, the tail light style changes from two layers of white/red to be the three layers red/white/red. The two variants of engines is 1.5L (in the first generation) and 1.6L (available only after some minor changes). 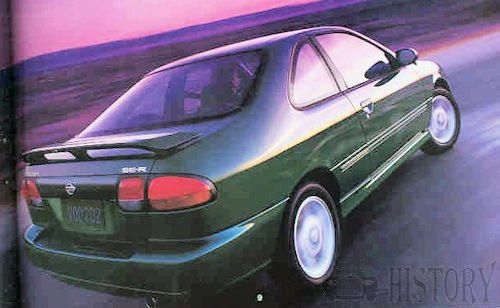