Vehicle manufacturer Netherlands from 2013 on. 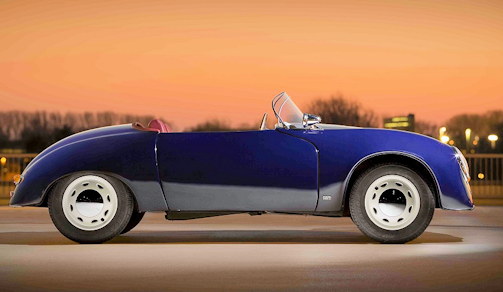 Carice Cars from Delft in the Netherlands build Retro look electric cars since 2013.

The Carice MK1 is a roadster of the Dutch automaker Carice Cars from Delft. The vehicle was presented in 2013 at the Techno-Classica in Essen. It looks like a vintage Porsche car, but is powered by an electric motor. The car looks very much like the Porsche 356 Spyder. According to the manufacturer, initially a production of ten copies is planned, which are available from 26,620 euros. In an innovation competition of the Dutch Rabobank, the first place was achieved in 2013.

The body is completely made of plastic, which could save weight. So comes the MK1 including battery pack to a total weight of about 350 kilograms.

There are the Carice MK1 in different performance variants:

Each vehicle is built according to individual customer requirements. All variants are equipped with a lithium-ion battery, which can be charged in about two hours. The range is about 100 kilometres. In addition, a standing cylinder - petrol engine as a range extender on offer, as well as one's hydrogen-powered planned.  Upon request is a simple cover for the roadster available.