Automotive manufacturer of Netherlands from 2000 on 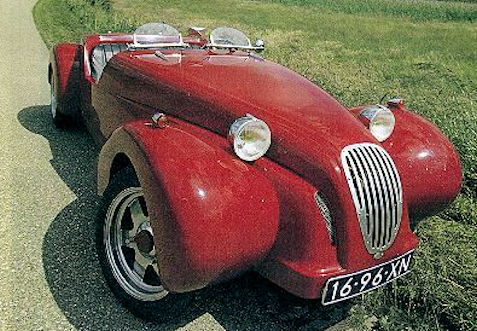 The company existed since 1993 under the name Duck Hunt.Burton introduces sports cars whose mechanics come from the French Citroën 2CV in 2000. The Burton is an open, classic-looking sports car on the chassis of the 2CV with a modern body made of fiberglass . The car is built as an open two-seater, as a coupe with gullwing doors , or with a canopy made to customer specifications.

At the end of 1998, Ivan and Dimitri Goebel had started the design of the Burton, which they called "Hunter" at the time. They were inspired by famous sports cars such as Bugatti , Jaguar , Talbot-Lago , Delahaye or Alfa Romeo . After 18 months, the prototype was ready and on February 9, 2000, the first body was taken out of shape. In May 2000, the Burton was presented to the Dutch clientele.The Low road tax costs made these cars popular with over 5 million 2cv  "ducks" sold parts were easily avaliable.Burton also imports and sells Lomax automotive vehicles