Automotive manufacturer of Deventer.Netherlands from 1898 to 1906. 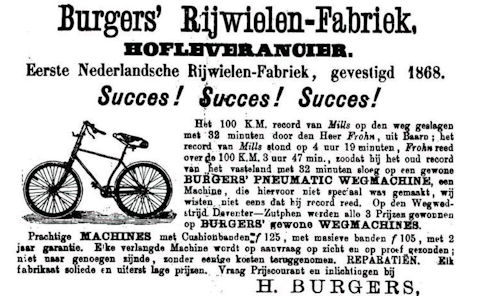 Burgers not only sold bicycles, but other products such as meat slicers, sewing machines and mopeds, which were not all produced by the company itself.

In 1898 Burgers's first car was launched. The company mainly produced three-wheeled automobiles with engines from De Dion-Bouton ,which it also distributed.

The small car possessed built-in motors of various manufacturers such as Black Burne , De Dion-Bouton , Fafnir , JAP and Minerva . In a 3 wheel tricycle from 1900,By 1906 ended car production. But 1907 began the import of vehicles of the Star Motor Company and Stuart . 1952, they attempt to rebuild motor vehicles with the licensed production of Brütsch models was unsuccessful.