The Morris FV was a 5 ton truck manufactured by Morris Commercial , part of the British Morris Motor Company , from 1948 to 1959.

The Morris FV replaced the Morris CVF . After the merger of Morris and Austin Motors from 1954, the vehicle was also sold under the Austin brand. In 1955 the model was revised and received the designation Morris / Austin FE . In addition, a variant with a payload of seven tons was offered, which replaced the Austin Loadstar . This variant was 1958 by the Morris FF, the other variants of the series from 1959 replaced by the Morris FG .

Morris introduced 1948 a new range with a payload of five tons. The FV had a simple cab with rear-hinged doors. The design was largely similar to that of pre-war vehicles, although development began after the end of World War II.

In addition to the flatbed , panel vans ,and chassis for special bodies were also offered. A fire truck on the chassis of the FV was available ex works. 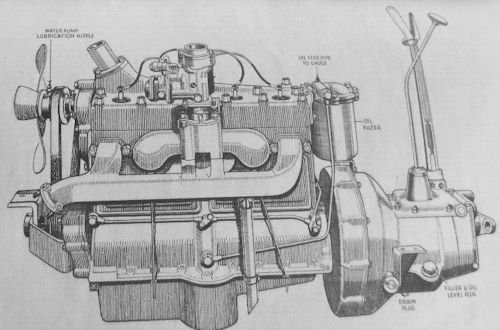 After the merger of Morris and Austin to British Motor Corporation for the model year 1954, the cabin was revised. Now the FV was also marketed as Austin.

To distinguish were the technically identical vehicles on the radiator grille, which was heart-shaped at Morris. 1954, the vehicle was revised, the doors were now battered front. This series was referred to as series II , the vehicles manufactured until 1954 of the original version were called the series I,and later as the series II.