The Morris CDSW 6x4 was a British Field Artillery tractor a six-wheeled military vehicle , which was derived from the Morris C-type and was first produced in 1935 for the British Army .

In 1939, the CDSW AA launched with a modified chassis and engine of the Morris CVF and was used to tow the 40mm Bofors guns in the Light Anti Aircraft (LAA) Regiment. There was also a version of the CDSW with a built-up crane used as a breakdown recovery truck. In its main function, the hauling of the 25-pounders, this was replaced in 1939 by the Morris C8 . The CDSW AA had a six-cylinder gasoline engine with 60 hp power as the drive and was also available in a version for the fire department . Like the Morris C8 , the CDSW was used on all fronts of the Second World War as well as in the Korean War . And production also ended in 1945. 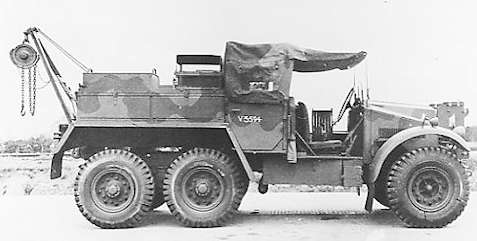