The Morris Commercial J4 was a 10 cwt (0.5 ton) forward control van (driver's cab on top of the engine) launched by the Morris Commercial subsidiary of the British Motor Corporation (BMC) in 1960 and produced with two facelifts until 1974, available with the familiar B series petrol engine in 1622cc form and also, at extra cost, with a 1500 cc diesel unit. Stopping power came from drum brakes all round: there was no servo assistance. Suspension was similar to that on the Austin Cambridge/Morris Oxford of the time: the front independent suspension incorporated coil springs and hydraulic "Lever-type" shock absorbers while the rear springing was achieved by semi-elliptic leaf springs.

In the 1960s light vans were often named simply by their load capacity, and the van at the time was often called simply the Morris 10/12 cwt. (The "cwt" - pronounced "hundredweight" - is an imperial unit of weight much used in Britain at the time and equivalent to approximately 50 kg:, these names therefore denoted a load capacity of 500/600 kg. There was also a US cwt but this had a different value.)

The van was marketed first as both the Morris J4 and the Austin J4. Following the formation of the British Leyland Motor Corporation in 1968, into which BMC, by then a subsidiary of British Motor Holdings, had been absorbed, the van was branded as the BMC J4. 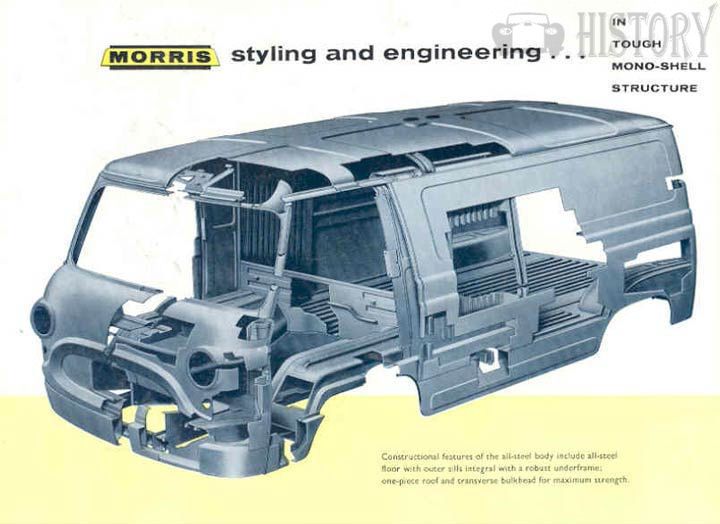 During its life the van underwent minor improvements under the metal. However, even in 1967 the vans were still shipped with synchromesh on the top three forward gears onlyThe engine lived in the driver's cabin between the two seats: the van was considered unusually noisy, even in the 1960s. A J4 petrol engined based motor caravan was tested by Britain's Autocar magazine in 1967. It managed a maximum speed of 63 mph (101 km/h) and a time from 0-50 mph (80 km/h) of 20.2 seconds. The vehicle as tested weighed 2,910 pounds (1,320 kg) and overall petrol consumption for the test came in at 22.7 mpg-imp (12.4 L/100 km; 18.9 mpg-US).

This van became a familiar sight on British streets collecting and delivering mail in the Royal Mail livery of the Post Office. Although quite a successful light commercial, it sold mainly by virtue of keen pricing to large fleets, living after 1965 in the shadow of the all conquering front engined Ford Transit, as did several other British built 60s/70s light commercials such as the Leyland Atlas, Commer FC and the formerly class leading but now ageing Bedford CA. Indeed whilst competent as a van the Morris J4 offered a rather poor driving experience even by the standards of the day.

The J4 was replaced in 1974 by the front engined Sherpa van, which utilised the rear panel work of the J4 virtually unchanged, this remaining in production in various forms until 2006. 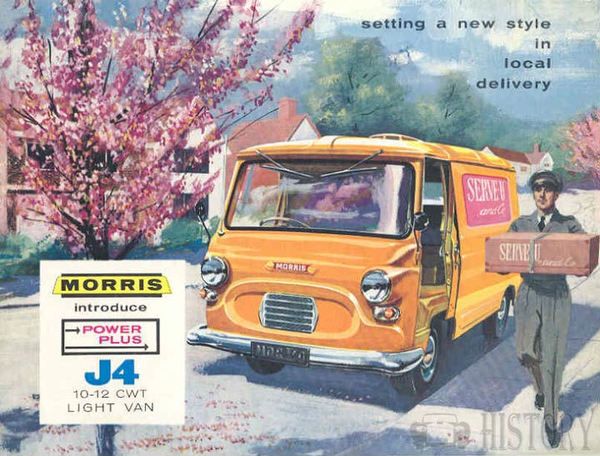