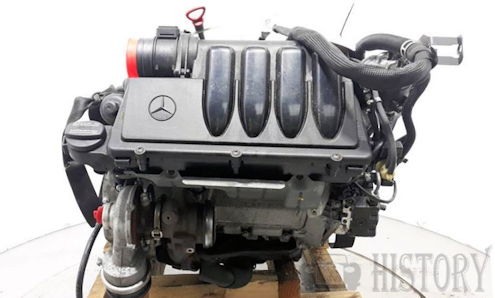 The OM 640 is a diesel engine with four cylinders arranged in series by Mercedes-Benz . This was installed from 2004 to 2012 in the A and B class . The most comparable to the OM 640 gasoline engine with a similar shape is the M 266 , its predecessor was the OM 668 .

The OM 640 has one common-rail injection and four valves per cylinder. All variants are equipped with engine charging and intercooling. As usual with Mercedes, the overhead camshafts are driven by two timing chains .

The motor is inclined forwards by approx. 60 ° and is installed transversely behind the driven front axle on vehicles with sandwich floor . Power is transmitted via a manual gearbox with five (160 CDI) or six gears (180 CDI and 200 CDI) or via the continuously variable Autotronic . The engine and transmission could only be used in these vehicles due to their unusual installation position.

On the basis of the OM 640, a version capped by a cylinder was used in the 2004 Smart Forfour and Mitsubishi Colt . Also, the OM 639 has timing chains and a common-rail injection, with the exception of the missing fourth cylinder, data such as bore and stroke are identical. However, the installation position is typical for front-wheel drive: engine standing transversely in front of the front axle. It was offered in two performance levels: