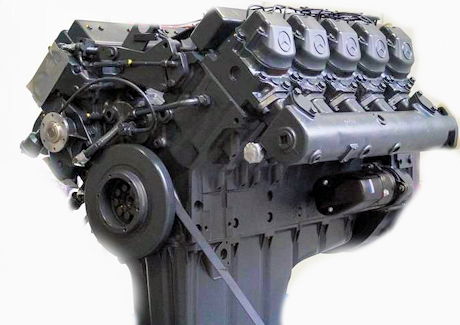 The engine series OM 401 , OM 402 , OM 403 and OM 404 is a series of diesel engines with 6 to 12 cylinders in V-arrangement . It was jointly developed by Daimler-Benz and MAN in the mid 1970s and built jointly while preserving company specifics such as different combustion processes. The main application area was the drive for trucks .

The entire series is as follows:

The development of these engines was triggered by the changed at that time minimum motor for long-distance trucks of 8 hp / t. At 38 t for the regular trailer this resulted in 308 hp, this performance was no longer possible with the old engines. For trucks, the 6/8/10-Zylinder were normally used as suction engine, with a cylinder output of 32 HP this gave 192/256/320 HP. The then also widespread 32t train could be offered with the 8-cylinder engine cheaper than the 38t train.

The aim was to jointly use expensive basic elements (such as engine blocks, crankshafts and flywheels) through the cooperation of both manufacturers. The engines were virtually identical to below the cylinder head gasket, pistons and (single) cylinder heads were manufacturer-specific at Mercedes with direct injection (or MAN with center-ball method ). Together, in turn, the engines of both manufacturers, the series injection pump in the cylinder-V.

The modular design principle further increased the number of units for important components and lowered unit costs. The basic design of the engines is always the same: with a V-angle of 90 degrees, the crankshaft was extended by a crank from type to type , and two cylinders were added to the lengthening V. This allowed the motors to be machined on a single production line . The crankshaft always had only one crankpinfor two opposite cylinders. It was therefore accepted that only the V8 engine had a uniform firing distance. The V6 engine was quite restless, but had a very low weight. The cylinder bore was uniform 125 mm and the piston stroke for the smaller engines 130 mm, the 12-cylinder had 142 mm piston stroke. The 12-cylinder engine was the only one that was also offered turbocharged catalog.

The 12-cylinder engine was not used in regular Mercedes or MAN trucks, but only in special vehicles (eg heavy-duty tractors). Due to its larger length, he was the only one not fit completely under the driver's cab, but stood out at the back. With modified peripheral equipment, all engines were also offered as built-in motors , marine drives , locomotive drives , for small power stations and similar purposes.

This series also includes the 6-cylinder in-line engine OM 407 / 407h . The engine was upgraded to the OM 420 (later OM440 and OM500) and is still in production today, after more than 40 years. However, MAN has abandoned its stake in the joint engine plant and sold it to Mercedes-Benz.

In addition to the engines installed in the same way were often the clutches and the transmission of many vehicle series in the sequence similar to construction. Thus, the customers could vary with a variety of transmission series from different manufacturers.

In accordance with the very diverse uses, road trucks, construction site trucks, four-wheel vehicles, municipal vehicles (garbage disposal, etc.) were installed with many variants of chassis, drives, axles and brakes. Between very many similar vehicles, corresponding components could often be exchanged, which increased the series of production and consequently made it possible to limit production costs and spare parts prices.