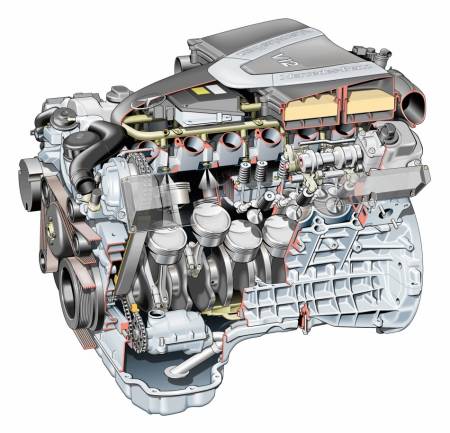 The M 137 is technically similar to the eight- and six-cylinder M 113 and M 112 engines. Like the latter, it has a single camshaft per cylinder bank and two intake and one exhaust valves per cylinder, actuated by aluminum roller rocker arms, and two spark plugs, which are actuated with a time delay.

The light metal crankcase with cast-in Silitec cylinder liners ( Al - Si alloy) is constructed in bedplate construction, ie. H. divided at the height of the crankshaft, wherein in the lower part crankshaft bearing bridges made of GGG are screwed.

The engine had to be very compact for installation in the 220 series. The W 220 is significantly smaller than the precursor W 140 ; The engine compartment in the W 220 is designed to match the dimensions of the eight-cylinder M 113. The decision to offer a twelve-cylinder engine in the W 220 - as in the predecessor - had fallen late in the course of development. Thus, the M 137 was designed slightly long-stroke ( piston stroke greater than cylinder bore ) and the cylinder spacing was set to only 90 mm to keep the engine compact.

The M 137 is not only much smaller, but with 220 kg and 80 kg lighter than the M 120th The M 137 is a three-valve and single-shaft per bank slightly simpler structure than its predecessor M 120, the four valves per combustion chamber and has two camshafts per cylinder bank.

The M 137 received as a novelty a cylinder deactivation. At low load and up to a speed of 3000 rpm, the engine moves all twelve pistons, but only the six cylinders of the right bank operate. The valves of the left bank are shut down in the closed state to avoid pumping losses. The rocker arms are divided into two parts; they can be decoupled by a hydraulically actuated piston. Its own oil pump supplies the necessary hydraulic system with oil from the engine oil circuit. The cylinder deactivation improves the efficiency of the engine through smaller throttle losses and higher effective compression,

The AMG version of the M 137, which was enlarged to a round 6.3-liter displacement, was used in the S-Class and the CL Coupé from autumn 2001. Only a few examples of the AMG version of the G-Class (G 63 AMG) were made with this V12 engine. The unit produces 326 kW (444 hp) and develops a maximum torque of 620 Nm. It was replaced already in 2002 in all models of the supercharged 5.5-liter supercharged V8 . This had only eight cylinders, but clearly outperformed the V12 in power and torque.