Mazda presented the fourth generation of the MX-5 on September 7, 2014 simultaneously in three countries (USA, Spain and Japan). The new model was then presented at the Paris Motor Show in October 2014 and at the Los Angeles Auto Show in November 2014 .

Production started on March 4, 2015. Production location is still Hiroshima in Japan. A collaboration with Alfa Romeo announced in May 2012 was canceled in mid-2014. In November 2015, FCA presented the Fiat 124 Spider based on the ND platform.

The new model is 105 millimeters shorter and with comparable equipment more than 100 kilograms, the basic version 82 kg lighter than its predecessor: the body by 20 kg, engine by 18 kg, transmission by seven kilograms, seats by eight kg.

Parts of the frame, axles and body the hood, for example are made of aluminum. The soft top, which is thicker and therefore better insulated from the second equipment level onwards,  is operated manually as with the previous roadster.

A version with an electrically operated retractable roof, as it was sold in the previous model from 2008 under the name Roadster Coupé, Mazda presented at the New York International Auto Show 2016 as the MX-5 RF . The cockpit is similar to that of the Mazda2 and CX-3 .

Like its predecessor, the fourth MX-5 is only available with a gasoline engine and also has rear-wheel drive . The entry-level version has a new 1.5-liter gasoline engine with 96 kW (131 hp), while the more powerful version has a two-liter engine with 118 kW (160 hp). Both engines are direct-injection units without a turbocharger: Mazda calls this SkyActiv technology; it includes, inter alia. a compression of up to 14: 1, hollow pistons, engine block made of an aluminum alloy, multi-hole injectors and 30% less friction. By February 2011, Mazda said it had applied for more than 130 patents.

The crankshaft is made of steel.With both engines, 80% of the maximum torque is available from 2000 rpm. Changes to the camshaft and moving parts made it possible to increase the speed limit of the 1.5-liter engine to 7500 rpm.The manual transmission always has six gears, regardless of the selected engine. The gear ratio is very short (e.g. 1st gear: 5.087: 1); the differential, on the other hand, is designed to be very long at 2.86: 1. As with the predecessors, the length of the switching travel remained at 40 mm. An automatic transmission will only be offered for the MX-5 RF .

The MX-5 distributes its weight evenly on both axes, a 50:50 weight distribution.  The chassis has double wishbones at the front and multilink suspension at the rear . The brake system uses disc brakes on both axles, internally ventilated at the front; Their diameter is approx. 250 mm for the weaker model and 280 mm for the stronger model.  The steering is electrically assisted for the first time on the MX-5.

For the 2019 model year, the engines were adapted to the Euro 6d-TEMP emissions standard . The injection pressure is now 300 bar. The combustion chamber geometry has been improved with regard to the flow conditions and the cooling system has also been improved and friction has been further reduced. The engines were also redesigned for better throttle response. The two-liter engine now achieves 135 kW (184 hp).There are also five new driver assistance systems , including City Emergency Brake Plus , which detects obstacles behind the vehicle, drowsiness detection and traffic sign detection. 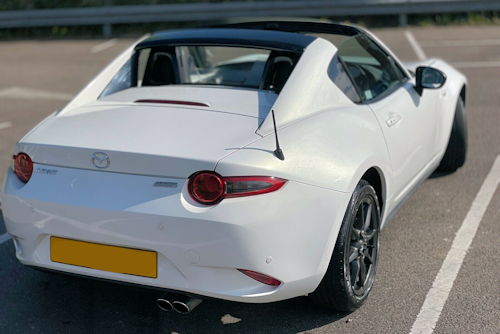