The sixth generation of Familia (BG) included a three-door hatchback, five-door fastback, and a four-door sedan variants, none of which shared any body panels. The new five-door fastback version was called the Familia Astina in Japan and was sold as the 323F or 323 Astina elsewhere. The BF wagon (originally introduced in 1985) was carried over in facelifted form, although Ford marketed a wagon on the new platform as part of the North American Escort line.

The BG Familia was available with front- or all-wheel drive and a 1.3 L, 1.5 L, 1.6 L, or 1.8 L gas or 1.7 L diesel engine. Later, a turbocharged engine was added, especially developed for homologation purposes for the World Rally Championship, Group A category. In North America, the 323 sedan became the Protegé, while the 323 hatchback kept its name. The four-wheel drive models (including the turbocharged GT-X) were introduced in August 1989. In Japan, the SOHC 1.6 was only available coupled to four-wheel drive. With a carburettor, it offered 91 PS (67 kW), the same as the lower-spec 1.5, but with a somewhat meatier torque curve.

The GT model, only sold in Canada in 1990, 1991, and 1993, came with the 1.8 BP engine also found on the 1991–94 Ford Escort GT. It borrowed the interior from the GTX model, and had all factory options including a rear trunk spoiler that not available in the U.S. Ford also had a twin called the Laser in the Asian Pacific for this generation, but sold it in the United States as the Escort. It no longer resembled the Mazda versions externally. The Kia Sephia also used the hardware of this generation Familia. 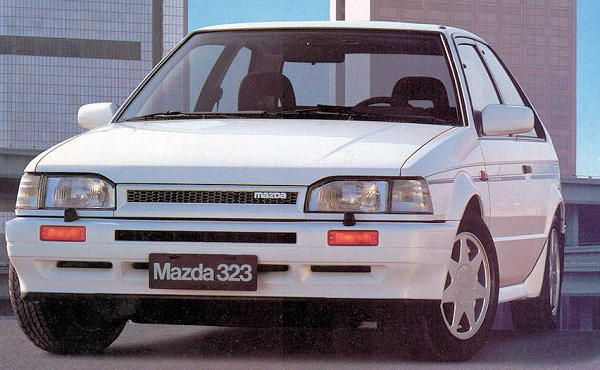 BG models that were assembled in New Zealand came with glass headlights instead of plastic, and a 240 km/h speedometer. 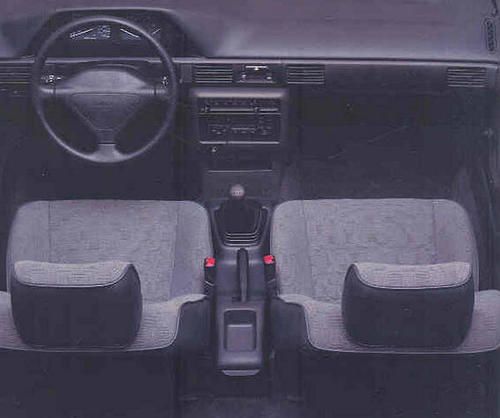 The Mazda Familia Infini was produced from 1989 to 1990 as a special Japan only special sport trim line of the four-door Familia. Much of the Infini trim is similar to the American LX version, equipped with the 1.8 DOHC BP-ZE engine and 5-speed manual. The Infini was upgraded with a viscous limited slip differential, tightened suspension package, and bonnet/headlight style similar to the 323 hatchbacks. In 1994, these were facelifts were adopted to all Familia sedan models. The Infini came only in dark green color with unique Infini trim grille, rear spoiler, "lightweight" carpet, without sound deadener, and with Infini (∞) logos on horn button, front grille, wheel caps, and bootlid. There were also unique factory front clear indicators, a Momo steering wheel, BBS 15" rims, suede interior with GTX style seat trim, leather gearboot & knob, front and rear strut braces, 22 mm sway bars front and rear, rear tie bar, a 7,100 rpm redline tachometer, as well as 250 mm four-wheel disc brakes. Around 1,000 Infinis were produced. 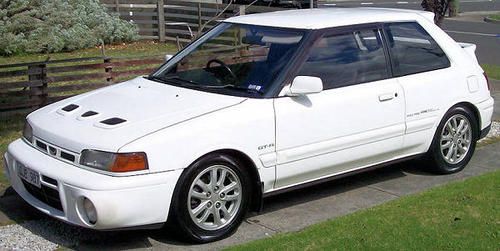 The JDM GTX model featured four-wheel drive, viscous limited slip differentials and a turbocharged 1.8 L BP engine. In the U.S. the Protegé came with a 1.8 L non-turbocharged engine, along with 4WD. The JDM GT-R rally homologation version was added in 1992, featuring a number of enhancements over the GTX model: a stronger gearbox (G5M-R), an aggressive front bumper, grill and bonnet vents, updated rear bumper, wheel flares, stiffer suspension and anti-roll bars with thicker cross members, and homologated five-stud wheel hubs with larger brakes. The interior was fitted with leather and suede seats, and had the option of replacing the cupholder with a 3 gauge cluster. In addition, the GTR has stronger connecting rods and pistons, larger oil squirters, larger nose crank, larger oil cooler, sodium filled valves, a baffled inlet manifold, larger injectors (from 360cc (black) to 440cc (orange)), removed boost cut, front-mounted intercooler, and an IHI VJ-23 ball bearing watercooled turbocharger. Both the GTX and GTR models were limited to a top speed of 180kph. However, removing a screw on the back of the instrument cluster, labeled 180kph, meant that the speed limiter was removed.

The GT-R produced 210 PS (154 kW) compared to the GTX with 185 PS (136 kW). 300 special version GT-R's were produced known as GT-Ae's. These shared the power output of the GT-R, but were 30 kg (66 lb) lighter, fitted with closer ratio gearboxes, and featured a larger top spoiler with a gap between the hatch and the spoiler to direct air to the new lower spoiler. The wiring for ABS, A/C, power mirrors, power windows, power locks, and sunroof was removed. Instead of using the GTR's leather interior, the lighter cloth interior of the GTX was used.

A sporty, five-door hatchback version was called the Familia Astina in Japan. Elsewhere, it was called 323F and 323 Astina. A luxury version was also sold in Japan as the (Japanese: Eunos 100). The car was produced from 1989 until 1994 before being replaced by the Lantis. A key feature of the Astina/F is the distinct front end with its pop-up headlights. There were carbureted or fuel injected SOHC versions available of the 1.5 and 1.6 liter engines, as well as a larger 1.8 litre DOHC version with fuel injection. Unlike the standard Familia saloons and three-door hatchback, the Astina never came from the factory with a turbo or with four wheel drive.

Taillight arrangement varies from market to market, the main difference being the third brake light in the spoiler and two brake lights per cluster (Japanese spec), rather than one. 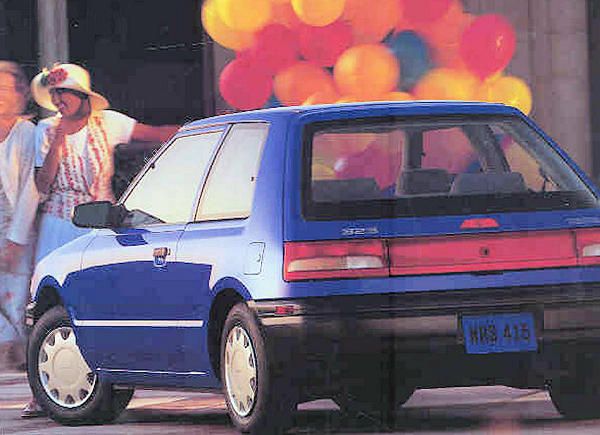