The MX-5 was unveiled at the Chicago Auto Show on February 10, 1989, with a price tag of US$14,000 (US$25,400 in 2011 adjusted for inflationThe MX-5, with production code NA, was made available for delivery to buyers worldwide in the following dates: March 1989 in Japan; May 1989 (as a 1990 model) in the US and Canada; and 1990 in Europe. An optional hardtop was made available at the same time, in sheet moulding compound (SMC). Demand initially outstripped production, fueled by enthusiastic press reviews.

The MX-5, also known as Miata (pron.: /miˈɑːtə/) in North America and Eunos Roadster in Japan, is a lightweight two-seater roadster, of front-engine, rear-wheel-drive layout, built by Mazda in Hiroshima, Japan. The model was introduced in 1989 at the Chicago Auto Show. The MX-5 was conceived as a small roadster – with light weight and minimal mechanical complexity limited only by legal and safety requirements

In Japan, the car was not badged as a Mazda, as the company was experimenting with the creation of different marques for deluxe models, similar to Nissan's Infiniti and Toyota's Lexus (both brands of which launched at the same time as the Miata). Instead, the Mazda MX-5 was sold as the Eunos Roadster in that market.

The body shell of the NA was all-steel with a light-weight aluminium hood. Overall dimensions were 3,970 mm (156 in) in length, 1,675 mm (65.9 in) in width, and 1,235 mm (48.6 in) in height. Without options, the NA weighed only 2,150 lb (980 kg). Drag coefficient was indicated as 0.38. Suspension was an independent double wishbone on all four wheels, with an anti-roll bar at the front and rear. Four wheel-disc brakes, ventilated at the front, were behind alloy wheels with 185/60HR14 radial tires. The base model came with stamped steel wheels from the then-current 323/Protege.

The body is a conventional, but light, unibody or monocoque construction, with (detachable) front and rear subframes. The MX-5 also incorporates a truss marketed as the Powerplant Frame (PPF) which connects the engine to the differential, minimizing flex and contributing to responsive handling. Some MX-5s feature limited slip differentials and anti-lock braking system. Traction control is an option available on NC models. The earlier cars weighed in at just over a ton, with engine power output usually 116 bhp (87 kW). The later cars were heavier, with higher power engines.

The original MX-5 came with a 1.6 L (98 cu in) dual overhead cam inline four-cylinder engine, producing 86 kW (115 bhp) at 6,800 rpm, and 136 N·m (100 lbf·ft) of torque at 5,500 rpm. The engine employs an electronic fuel injection system using a vane-type air flow meter and an electronic ignition system with a camshaft angle sensor instead of a distributor. This engine, codename B6ZE(RS), was specifically designed for the MX-5 and featured a lightened crankshaft, flywheel, and aluminum sump with cooling fins.

Standard transmission was 5-speed manual. In Japan and the US, an optional automatic transmission was also offered but proved to be unpopular. The Japanese and American markets also received an optional viscous limited slip rear differential, although it was only available for cars with a manual transmission. To achieve the low introductory price, the base model was stripped. It had steel wheels, manual steering, roll-up windows, and no stereo or air-conditioning. Power steering, air-conditioning, and stereo were added as standard equipment in later years.

With an approximate 50:50 front/rear weight balance, the car has nearly neutral handling. Inducing oversteer is easy and very controllable, thus making the MX-5 a popular choice for amateur and stock racing, including, in the US, the Sports Car Club of America's Solo2 autocross and Spec Miata race series, and in the UK, the Ma5da racing championship.

"Technologically modern, but a philosophically direct descendant of small British and Italian roadsters of the 1960s"

From idea to production

In 1976, Bob Hall, a journalist at Motor Trend magazine who was an expert in Japanese cars and fluent in the language, met Kenichi Yamamoto and Gai Arai, head of Research and Development at Mazda. Yamamoto and Gai Arai asked Hall what kind of car Mazda should make in the future.

In 1981, Hall moved to a product planning position with Mazda USA and again met Yamamoto, now chairman of Mazda Motors, who remembered their conversation about a roadster and in 1982 gave Hall the go-ahead to research the idea further. At this time Hall hired designer Mark Jordan to join the newly formed Mazda design studio in Southern California. There, Hall and Jordan collaborated on the parameters of the initial image, proportion and visualization of the "light-weight sports" concept. In 1983, the idea turned concept was approved under the "Offline 55" program, an internal Mazda initiative that sought to change the way new models were developed. Thus, under head of project Masakatsu, the concept development was turned into a competition between the Mazda design teams in Tokyo and California.

The first round of judging the competing designs was held in April 1984. At this stage, designs were presented solely on paper. The mid-engined car appeared the most impressive, although it was known at the time that such a layout would struggle to meet the noise, vibration and harshness (NVH) requirements of the project. It was only at the second round of the competition in August 1984, when full-scale clay models were presented, that the Duo 101 won the competition and was selected as the basis for Mazda's new lightweight sports car.

The Duo 101, so named as either a soft top or hard top could be used, incorporated many key stylistic cues inspired by the Lotus Elan, a 1960s roadster. International Automotive Design (IAD) in Worthing, England was commissioned to develop a running prototype, codenamed V705. It was built with a fiberglass body, a 1.4 L (85 cu in) engine from a Mazda Familia and components from a variety of early Mazda models. The V705 was completed in August 1985 and taken to the US where it rolled on the roads around Santa Barbara and got positive reactions.

The project received final approval on 18 January 1986. The model's codename was changed to P729 as it moved into production phase, under head of program Toshihiko Hirai. The task of constructing five engineering mules (more developed prototypes) was again allocated to IAD, which also conducted the first front and rear crash tests on the P729. While Tom Matano, Mark Jordan, Wu Huang Chin, Norman Garrett and Koichi Hayashi worked on the final design, the project was moved to Japan for engineering and production details.

By 1989, with a definitive model name now chosen, the MX-5 (as in "Mazda Experiment", project number 5) was ready to be introduced to the world as a true lightweight sports car, weighing just 940 kg (2,100 lb).

Although Mazda's concept was for the MX-5 to be an inexpensive sports car, the market proved extremely eager for it; the car became an overnight novelty, resulting in many dealers placing customers on lists for pre-order due to the demand exceeding the anticipated supply. Several dealers across North America resultingly took advantage of this high demand and dramatically increased the markup on the vehicle; some asked for as much as USD $17,000 retail price. 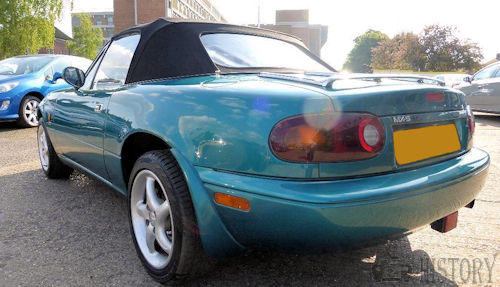