The Mazda3 has been generally well received by the automotive press for its performance, handling, styling and interior, with some describing it as feeling like a more expensive sport sedan despite its value-oriented price.Some criticisms have included fuel economy and crash test results (only receiving four out of a maximum five stars from the EURO NCAP Safety Testing Programme) the latter of which was rectified by making six airbags standard.In 2006 the Mazda3 was the second best-selling car in Canada and the best selling car in Israel during 2005–2007.

The Mazda3 is based on the Ford global C1 platform, shared with the latest European Ford Focus and Volvo S40. Based on the styling of the MX-Sportif concept car, the Mazda3 is available in two body styles, a four-door sedan, marketed as "coupé style" in Europe, and a five-door hatchback, branded the Sport version in Canada, Japan, and the United States. The lead stylist for this model generation was Moray Callum.

The front suspension comprises MacPherson struts, with coil springs and an anti-roll bar. The rear suspension is a Ford-designed "E-link" multi-link suspension, with four locating links per wheel and an anti-roll bar, suspended on coil springs that are mounted inboard of the shock absorbers to reduce suspension intrusion into the cargo area. Four-wheel Disc brakes are fitted, with 300 mm (11.8 in) discs in the front and 279 mm (11 in) discs in the rear; ABS and electronic brake force distribution are available or standard, depending on the model. Wheel and tire sizes vary with model, from 15" on base models to optional 17" wheels on upper-level models.

When first introduced, United States-market Mazda3 models were available in only two trim levels, i and s, with the 2.0 L and 2.3 L engines, respectively. Since then Mazda has introduced additional models under the Touring and Grand Touring labels. British Mazda3s are offered in S, TS, TS2, Sport, and a top end 2.3ltr turbocharged Mazda3 MPS (Mazda Performance Series) models. Since April 2008, when there was a mainly cosmetic facelift of the Mazda3, there have been some changes to the trim designations for UK cars, with the models now being the entry level S, then Takara (which replaces TS & TS2), the Tamara Special Edition and the Sport and MPS as before.

All 3 models use the inline-4 Mazda MZR engine, with various types, displacements and outputs including the MZ-CD turbodiesel, depending on model and market. Transmissions are a five-speed manual transmission and a four-speed automatic transmission; since the 2006 model year, a five-speed automatic is optional on models with the 2.3 L engine. This transmission has now been made standard on the 2.0 L engine in Japan (FWD models only), as part of a minor facelift in early 2008 which includes different front/rear bumper designs, new wheel designs and body colors, stiffened chassis, and better interior materials. The MPS / Mazdaspeed version is only available with a six-speed manual. 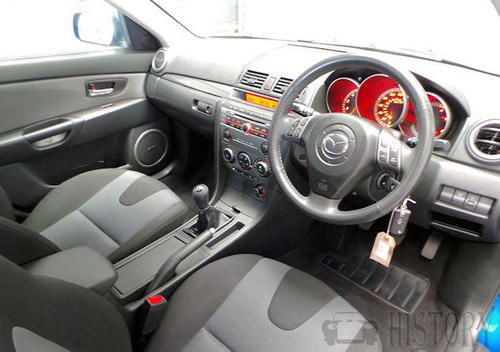 The basic  equipment that is standard across all versions of the Mazda 3 Saloon from 2004 to 2008.

The Mazda 3's maximum power is 108kW @ 6500 rpm which allows for it to enhance in its performance.

For the 2006 model year, Mazda added variable valve timing and variable-length intake runners to the 2.0 L engine resulting in a power increase to 150 bhp (112 kW; 152 PS). The automatic transmission used in Mazda3 S trim with the 2.3 L engine was changed from a four-speed to a five-speed design. The larger 2.3 L engine was PZEV-certified (Partial Zero Emissions Vehicle) for vehicles sold in California and other states that have adopted California automotive emission standards. The 2.0 L engine had already been PZEV-certified. The colour palette was also simplified in 2006, with the deletion of Canary Yellow and Lava Orange Mica.

The 3 received a minor cosmetic facelift for the 2007 model year with minimal exterior, interior and mechanical changes. On base models, the black plastic at the top of the grille became body-coloured. The front fascia and bumper were changed with a floating foglight design and the lower air intake opening was reshaped to better resemble the typical "Mazda five-point face." All Mazda3 sedans and five-doors gained the same "Axela" clear-lens style rear tail-lights as the SP23 model. Which in 2007 Mazda brought out the Mazda Axela similar to the Mazda6 Atenza . In addition, the Grand Touring trim also featured LED brake lights. The LED brake lights were added to compete with the growing trend of higher-end vehicles using LED tail lamps for more visible light output. The range of alloy wheels were redesigned, featuring a 17 inch alloy wheel for the Grand Touring version. The rear fascia was slightly changed adding a notch on the bumper cover of the sedan. Several new exterior colors were added, phantom blue, a copper red metallic (April 2008), Aurora Blue and dark cherry. The Titanium Gray color was replaced with a darker Galaxy Gray color.

The interior of the Mazda3 was offered with several new color choices and an audio jack in the centre console, allowing the use of digital music players. Also, Takara models, which were introduced in the 2008 upgrade, added climate control and 6 cd autochanger to the TS specification.

The 2007 model also includes less visible mechanical changes. The keyless entry system was improved. Reinforcements to the body shell improve overall chassis rigidity. The front dampers of the MacPherson strut suspension have been re-tuned to quicken steering response and reduce understeer. The hydraulic dampers of the multi-link rear suspension were also re-tuned to match the front suspension changes. Mazda engineers and designers addressed concerns regarding cabin noise level by redesigning or changing multiple systems and adding sound-deadening material to the roof lining and hood panel.

The bumper-to-bumper warranty was reduced to 36 months / 36,000 miles while the powertrain warranty was increased to 60 months / 60,000 miles in most markets. In the UK all Mazda3s have a 3 year unlimited mileage warranty, 3 year roadside assistance and 12 year anti perforation warranty as standard.

An additional trim level included the Sport GX with a 2.0L engine, previously all Sport hatchbacks had a 2.3L engine and came only in GS or GT trims. Compared to the GX sedan, the GX hatchback has body-coloured door handles, and fog lamps. Options for the Sport GX include air conditioning, a convenience package containing power accessories and 15-inch alloys, and a rear trunk spoiler.

In the U.S., the i Touring trim level was replaced by the i Touring Value model. This new model added a body-color front grille, fog lights and 17" alloy wheels, giving it a very similar appearance to the more expensive s models. The interior also received leather-covered steering wheel and shift knob from the s model. Anti-lock brakes and side-impact airbags, previously optional, were now standard.

Initial news reports indicated the 2009 model year would receive a minor face-lift with exterior design modifications that included chrome door handles, a new roof spoiler, expanded use of black moldings on the rear bumper, and new alloy-wheel options. This turned out to not occur in the US or Canadian market. The 2009 model year was only a few months long as production ceased in November 2008. 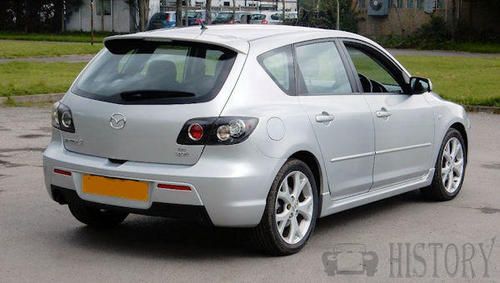