This version is built on the new DE platform, which Ford also used for the 2008 Ford Fiesta. It deploys light weight material and reduces the overall dimensions of the car.

The lead designer for the new model was Ikuo Maeda. Maeda was later promoted to Head of Design at Mazda in 2009.

Sales of production vehicles began in 2007-07-05 at Mazda, Mazda Enfini and Autozam dealers.

The vehicle was unveiled in 2007 Geneva Motor Show, and later in 2007 Shanghai International Motor Show.

This is a three-door hatchback version of Mazda2 for the European market. Engine choices include MZR 1.3-liter and 1.5- liter gasoline, MZ-CD 1.4-liter common-rail turbo diesel. In some EU Member States like the Netherlands, there is the option to buy the petrol car in bi-fuel LPG version from the factory. This model was unveiled at the 2008 Geneva International Motor Show.

The North American version of the Mazda2 was unveiled at the LA Auto Show 2009, and later in 2010 Canadian International Auto Show, making it Mazda's first subcompact in North America since the 323 was discontinued in the United States in 1994 (1995 in Canada).

The North American version became available in July 2010 for a starting price of $13,980 USD. The only engine available is the 1.5-liter, 100-horsepower four-cylinder matched to a 5-speed manual or 4-speed automatic transmission.

The sedan version is built in Thailand and China and sold in Southeast Asia and Australia, it is not sold in Japan.

A digital fuel gauge has been introduced. Stability control will not be standard in the Mazda 2 range but is available (except it is standard on all models in Australia). There are three trim levels available for the new 2 range, the first is known as the Neo which is the base model. It comes standard with air-conditioning and 15-inch steel wheels, though side air bags, 16-inch alloy wheels and a sports body kit come as standard on the range topping Genki. 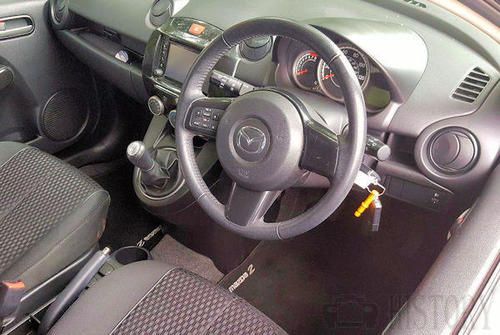 Chinese models were built in Changan Ford Mazda Automobile's Nanjing plant at the end of October 2007. 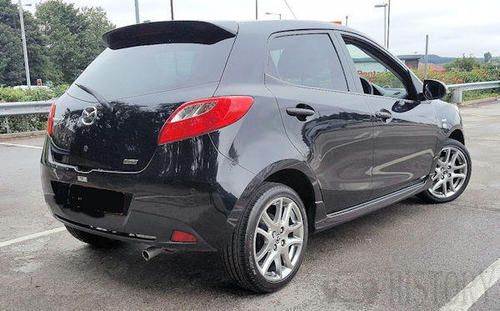