Maserati A6G  were various cars made by Maserati of Italy, named for Alfieri Maserati (one of the Maserati brothers, founders of Maserati) and for the straight-six engine.

The A6G were a series of two-door coupe and spyders by Zagato, Pininfarina, Pietro Frua, Ghia, Bertone, Carrozzeria Allemano and Vignale. These had alloy engine blocks. Between 1951 and 1957, only 16 single-cam cars were built, and there were 59 twin-cam cars. At this time, much more so than Ferrari, Maserati were really only on the fringe of building cars for road use, Between 1951 and 1953, Maserati built a series of 16 cars which they called A6G/2000s, which were effectively A6/1500s with an enlarged engine of 1954cc. pininfarina, Frua and Vignale all provided coupe or cabriolet styles — Maserati, of course, were quite incapable of building bodies. This, however, was only something of a holding operation, for the true A6G/2000 was the twin-cam six-cylinder model, whose engine was a detuned A6GCS/Formula Two unit, and which could be sold with anything up to 150bhp available. This was, indeed, a far cry from the 65bhp of the original A6/1500 model. It was an oversquare unit with most efficient valve gear and breathing. To match this, the chassis was modified, and semi-cantilever springs took over from the coil springs of the single-cam model. Almost the same chassis layout, incidentally, was used in the A6GCS sports racing car, which had such great success in 2-litre events, and of which no fewer than 46 Maserati A6G/2000, 1951

example's were sold. This car, and by inference the road car, were developed by Blilmtani and Massimino, with the undoubted help of Colombo, who had been There were spider and coupe body styles, in great profusion, from Zagato, Frua and Allemano, but in spite of their efforts, Maserati could only sell 59 cars in three years. These cars, however, were swept away in 1957 in favour of the much more commercially successful 3500 series. 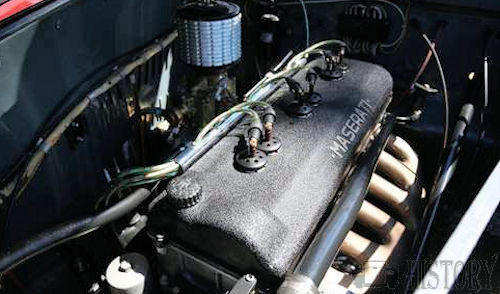 A 2-litre straight-six (120 bhp) was used in the A6 GCS two-seater, «G» denoting Ghisa, cast iron block, and «CS» denoting Corsa & Sports. Also called monofaro, the 580 kg single-seater and cycle-winged racing version first appeared at Modena 1947 by Luigi Villoresi and Alberto Ascari, and won the 1948 Italian Championship by Giovanni Bracco. Fifteen cars were made 1947-1953, of these being two-seaters (630 kg).

To compete in the World Sportscar Championship, the A6GCS/53 (1953–55) was developed (170 bhp), spyders initially designed by Colombo and refined by Medardo Fantuzzi and Celestino Fiandri. Fifty-two were made. An additional four berlinettas and one spider were designed by Pininfarina, their final design of a Maserati, on a commission by Rome dealer Guglielmo Dei who had acquired six chassises. Also, Vignale made one spider.

The 1954 Mondial de l'Automobile in Paris showed the A6GCS/54, which came in berlinetta, barchetta and spider versions (150 bhp), with designs by Pietro Frua, Ghia and Carrozzeria Allemano. It was also referred to as the A6G/2000 and 60 were made. 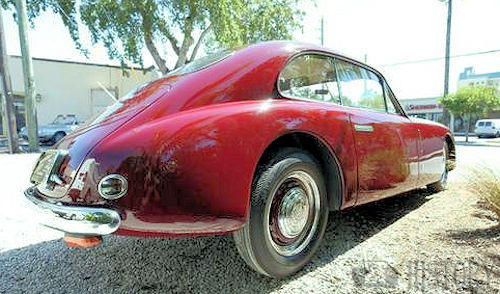