The second generation, which is no longer based on the Land Rover Discovery but on the new Range Rover, even though 75% of the parts are different, was unveiled on March 26, 2013 in New York City . Market launch in Europe was on 20 September 2013.

The Range Rover Sport is an off-road vehicle that has been offered since 2005. The first generation was based on the platform of Land Rover Discovery , but was sold for marketing reasons under the more prestigious name Range Rover , which should be addressed to a different, younger shoppers. The introduction started in February 2005.

The second generation appeared Europe-wide on 20 September 2013. It is characterized by a significant weight reduction, which is achieved by a body made entirely of aluminum. Technically, the model is based on the fourth Range Rover generation. Many components such as chassis, on-board electronics, gearbox and suspension were taken over. For model year 2018, the series will receive a revision.

The vehicle is available in various equipment lines, all differentiated by different standard extras and build on each other: S / SE; HSE; HSE Dynamic and Autobiography Dynamic.

On June 6, 2013, Paul Dallenbach set the Range Rover Sport 5.0 Supercharged a new best time for series SUVs on the official race track of the famous Pikes Peak International Hill Climb hill climb . The vehicle was in original condition except for an additionally installed roll cage. With a power loss of up to 40%, which is due to the thin air at the appropriate height, Dallenbach needed 12 minutes 36 seconds and 61 hundredths.

Compared to its predecessor, the off-road capabilities have been improved. The Range Rover Sport from model year 2014 has a maximum fording depth of 850 mm. New onboard systems such as "Wade Sensing", which uses radar sensors in the exterior mirrors to measure the depth of water around the vehicle, enable safe driving on unknown routes.

For the first time in the Range Rover Sport, this generation of manufacturers decided to offer two different drive variants for different requirements. Basically, the vehicle is always equipped with four-wheel drive. However, there is in addition to the already known system with reduction gear and differential lock a less expensive and 18 kg lighter, but not so powerful version with a Torsendifferential as standard equipment. This is designed for operation on paved roads and provides enough traction in everyday use. The version with the known system is especially recommended for off-road driving and towing with a trailer. 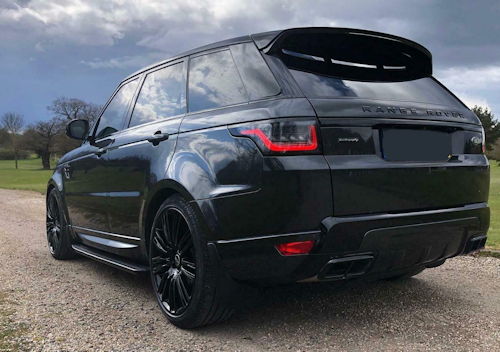