Wolf was the project name used by Land Rover. It came up in an informal Land Rover engineering meeting, the engineering director said “if we’re not careful this project is going to bite us in the arse”. The transmission manager then said “well we'd better call it Wolf then”.

The MoD designates the Wolf 90 as Truck Utility Light (TUL) and the Wolf 110 as Truck Utility Medium (TUM) High Specification (HS) and Land Rover calls it eXtra Duty (XD). The name Wolf has been adopted by soldiers as a generic term. Contrary to what many people think Wolf does not mean Wheel On Left Flank.

From the debate in British parliament of 18 January 1996:

"The Land Rover vehicle, known commercially as Defender XD, has been subjected to extensive and rigorous trialling in order to ensure that it can meet the high standards of reliability which are essential for operational military vehicles. Therefore, I am pleased to have been able to announce earlier today that, subject to the satisfactory completion of contractual negotiations, I propose to place an order with Land-Rover for about 8,000 vehicles. That order is worth about £170 million. It will bring substantial industrial and employment benefits to Land-Rover, and enhance the vehicle's already excellent prospects in export markets." 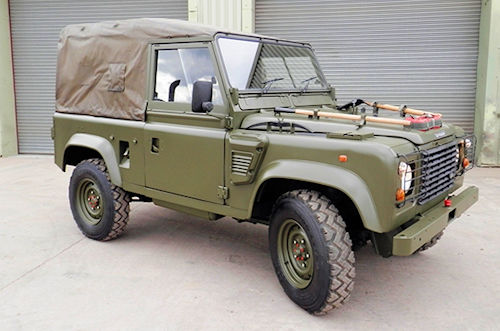 The Wolf was tested, rejected, upgraded and tested again before the MoD was satisfied. It is far stronger and more reliable than the Land Rover Defender on which it was based.

When the Wolf was designed the engine in the civilian Defenders was the Td5. Land Rover preferred the 300Tdi for the Wolf because the electronics in the Td5 were more complex to manage in the field.

The 300Tdi on a Wolf uses a slightly different design of timing cover compared to the civilian version.

The testing was extremely rigorous and Salisbury axles kept breaking, the axle was redesigned using stronger internals, hubs and outer casing, making one of the strongest axles ever made.

The fibreglass roof was far simpler to manufacture over the raised height of the roofbars than the Defender aluminium roof. The production was outsourced.

Everywhere else where Land Rover tried to mount the spare wheel caused the mountings to break free and it was too heavy for the bonnet. There are 3 versions of mounting, soft top, hard top and quick release.

The chassis is considerably different in design to the standard Defender chassis even though it looks similar. The side walls are standard, most of the rest is bespoke. The additional rear load bed mounting was to take increased weights as the standard chassis kept punching big dents in the rear floor.

Chassis made after the production run (service chassis) are slightly different, later ones have a triangular reinforcement behind the front outriggers, none of them have the front round tube going through the main chassis walls as it is more costly to tool and produce although it is stronger.

The chassis wasn’t galvanised due to the additional weight it adds. There were also Health and Safety concerns about the gases involved in welding a galvanised chassis.

WMIKs made from the factory had two outriggers in the middle of the chassis instead of just one on a standard Wolf chassis. The second outrigger is to take the extra load of the gun mounting. Many WMIKs were converted from Wolfs and kept one outrigger.

The chassis on all Wolfs was sprayed internally with Dinitrol rust proofing. 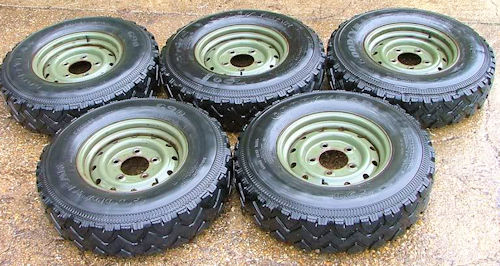 Goodyear G90s were designed for the project and strengthened on the sidewalls in testing. The Michelin tyres were felt to be better but more expensive and classed as an approved second choice as used on Winterised/Waterproofed Wolfs.

Experience from the pre Wolf Military Defender showed that full jerry cans were dangerous and too tight in the lockers, the unusual shaped doors were simply to take full jerry cans more easily. They were meant to be watertight but never were.

The MoD procured at least 29 different versions. Some Wolf Land Rovers are winterised and/or waterproofed. Waterproofed versions have a snorkel that allows the vehicle to wade through water up to windscreen level. Winterised versions are fitted with an engine fluids heater to pre-warm the engine, a heated windscreen and heaters in the rear cabin.

Other modifications are made for operations in tropical environments. The Royal Marines operate a special deep-wading version for amphibious assaults. Fitted with a 'periscope' snorkel, waterproofed electrical systems and instruments, and prepared with grease and graphite lubricant on practically every moving part, these versions can run with the entire vehicle submerged if needed. The tailgate is held open by struts to allow water into the vehicle to prevent it floating away, and to allow water to rapidly drain after reaching the shore. In training exercises the vehicles are operated in depths so that the driver's head and shoulders are clear of the water.

Alongside the HS/Wolf programme the MOD ran a design project for a new battlefield ambulance vehicle, known as Project Pulse. This was also won by Land Rover with a version of the ultra-long wheelbase Defender 130. Whilst not officially a 'Wolf' the 130 ambulances (with bodies by Marshall Aerospace) used the same chassis and transmission upgrades, identical drivetrains and the same Defender-based front bodywork. 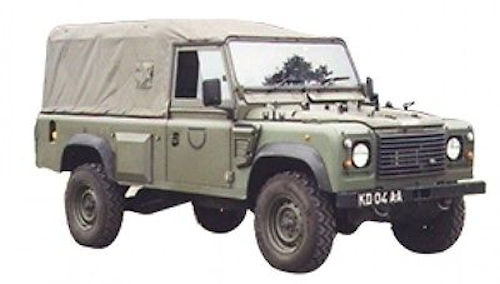 A variant of TUM is the Weapons Mount Installation Kit (WMIK, pronounced ‘Wimik’) for use as reconnaissance and close fire support vehicles. WMIKs are manufactured jointly by Land Rover and Ricardo Vehicle Engineering and feature a strengthened chassis and are stripped down, fitted with roll cages and weapon mounts. Typically the vehicle will carry one 12.7 mm Heavy Machine Gun, 7.62 mm General Purpose Machine Gun (GPMG) or on occasion the MILAN ATGM, on the rear ring-mount, with an additional pintle mounted GPMG on the front passenger side. In late 2006, the MoD announced it was purchasing 40 new belt-fed Automatic Lightweight Grenade Launchers (ALGL) made by Heckler and Koch (HK GMG) that can fire up to 360 grenades per minute with an effective range of 1.5 km and a maximum range of up to 2.2 km.; they are to be mounted on WMIKs in Afghanistan.

Wolf was marketed in other countries than the UK but many foreign military Land Rover procurement agencies felt they did not need the extra strength and reliability of the Wolf because the older models had passed their own testing and Wolf was too expensive.

Vehicles based on the Wolf were proposed for requirements raised by Canada and the USMC but not selected. Other nations' service Land Rovers are visually very similar, particularly Italy's, but are in fact based on the Core Model (military) Land Rover Defender which does not include the Wolf chassis enhancements and other features. The Wolf is currently in service with Croatia, the Netherlands and the United Kingdom.

The vehicles have become a symbol of British forces in Iraq and Afghanistan. In keeping with their hearts and minds philosophy they were chosen for patrol duties instead of armoured fighting vehicles such the Warrior infantry fighting vehicle. Following a spate of incidents, there has been concern that the unarmoured nature of the Wolf exposes the crews to excessive danger, and they are being supplemented by more heavily armoured vehicles such as the Vector and Mastiff Protected Patrol Vehicles.

The MoD is supplementing the Wolf by the now British built Pinzgauer and Alvis Panther in some utility and liaison roles and the new Supercat MWMIK due to a shortfall of WMIKs. There are reports that some of this equipment may have to be sold at below cost once operations in Iraq are completed as the Treasury has refused to cover the cost of replacement. In Afghanistan "an average of one of these vehicles a week" is being lost, and with replacements often arriving late; a "fifth of the fleet" of WMIKs is currently "damaged or has been destroyed by enemy fire".

The MoD is now selling off (casting) most of its fleet of Wolf 90 Land Rovers because the Bowman radio system is too heavy for the Wolf 90. The 110 version remains in service.

The expedition was cancelled only days before the planned departure date, and most of the fleet were auctioned off to the general public. These distinctive vehicles (as well as their high level of equipment, they are painted in the TransGlobal's gold livery) are desirable expedition vehicles, and several have been used on long-range trips by private owners including Land Rover's own Fifty 50 challenge and the Lone Wolf Transglobal Expedition.

Small numbers of ex-military Wolfs have also entered the civilian market. These are usually examples that were crash-damaged in military service and auctioned off, to be rebuilt by their new owners.

In 2003 the German government placed an order for a fleet of Land Rover Wolf vehicles for security and law enforcement forces. The fleet consisted of high capacity pick-ups, vans and station wagons. All fleet vehicles were ordered in Bonatti Grey with white roofs (last batch vehicles had grey roofs) and the electrical systems were kept to a minimum with all luxury items such as electric windows, heated seats, radar detector omitted for simplicity. Vehicles were supplied as a mixture of 12 and 24 volt FFR variants, their powerplants being either the standard Td5 turbodiesel engine, or some 3 Litre BMW units. The contract was cancelled in late 2004 after the German government opted for one with Mercedes Benz who supplied their G-Class "Gelandewagen" in various forms, and a small number of these last batch vehicles were imported and immediately sold-off to the private market.