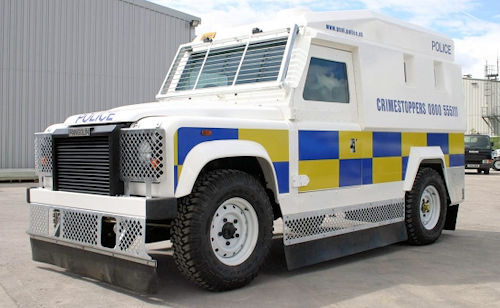 The Land Rover Tangi is a type of armoured vehicle, based on the Land Rover chassis used in policing in Northern Ireland. They have been used by the Royal Ulster Constabulary and, since its renaming, by the Police Service of Northern Ireland. The vehicle was designed and built in house by the Royal Ulster Constabulary's own engineers.

Due to the unique threat of terrorism faced by police officers in Northern Ireland during the Troubles, the RUC had long used armoured vehicles to provide protection to its officers. The first to be based on the Land Rover appeared in 1957, based on a Series 1 109" wheelbase pick-up body. This incorporated only a basic level of protection, designed to defend against bricks and bottles in a public order situation. An expanded metal cage was fitted over the rear cargo bed and lined with hardboard to prevent sharp objects being thrust through the cage. Similar expanded metal grilles protected the windows and headlights on the vehicle to prevent them being broken by thrown projectiles.

However, it was not long before the police came under attack with firearms; against which the cages and hardboard of the early Land Rovers provided no protection. Plates of ballistic steel were added to each side of the rear cargo bed and an armoured steel door was fitted to the rear. Whilst this provided a greater degree of protection from low velocity weapons, there were many areas of the vehicle which were still unprotected. The RUC realised that a fresh design was required to protect their officers.

The result was the Hotspur Land Rover, named after the brand of armour plate made in Wales used in its construction. The chassis of a civilian Land Rover 109 station wagon was used. Underneath the standard aluminium roof a second roof, fabricated from armoured steel, was installed. This provided overhead protection from gunfire, petrol bombs and IEDs. Large plates of ballistic steel were bolted to the sides of the vehicle, which wrapped around the rear pillar and met with an armoured double door. Both of these doors and the side plates were fitted with sliding pistol ports, allowing the officers inside to return fire in the event of an ambush. The rear doors, sides and roof constituted an armoured box providing all round protection to the crew in the rear of the vehicle. For the protection of the driver and the front seat passenger, the windscreen and side windows were replaced with thick sheets of bulletproof glass, along with armour-plated doors. Finally, an expanded metal grille could be pulled up over the windscreen to prevent the windscreen being broken by thrown objects during civil disorder, and the side windows covered with a sheet of transparent polycarbonate for the same purpose.

The Hotspur was immediately put into action and worked admirably. Myriad modifications were carried out over the years, including lining the vehicles' lower panels with sheets of polycarbonate to prevent the body panels from being dented during civil disorder. Metal grilles and rubber skirts were fitted around the lower perimeter of the vehicle to prevent projectiles being thrown under the body at officers who were sheltering behind, and also to prevent beer kegs being rolled under the vehicle in an attempt to immobilise it.

By the end of 1983, 151 Hotspurs had also been fitted with a fire extinguishing system operated by the front seat passenger. In the event of the vehicle being hit by a petrol bomb, as was not uncommon during civil disorder, a dashboard button was pressed. This caused the heater blower and engine fan to switch off, and a fire extinguisher was automatically discharged through a series of pipes into the engine bay and over the windscreen and bonnet.

The Hotspur was complemented by a more advanced armoured Land Rover called the Simba. This, rather than being a civilian Land Rover with armour bolted on, was a chassis which was fitted with a purpose built armoured steel body providing 360 degree protection against high velocity rifle fire, bricks, bottles, petrol bombs and small improvised explosive devices.

However, due to the Simba's advanced and purpose built nature it was very slow to produce and the Hotspur Land Rovers were beginning to wear out, so a solution was needed to quickly get more armoured police vehicles on the streets. The answer was the Land Rover Tangi.

Armour kits from tired Hotspurs were fitted onto brand-new Land Rover Defender 110 civilian chassis. When donor kits ran out, the RUC workshops began to fabricate brand-new ones. The vehicles' headlights were initially protected from damage by transparent polycarbonate shields, but these were quickly found to be less durable than the original metal grilles of the Hotspur and were replaced. At the front and rear of the roof each of the Tangis were fitted with a remotely controlled spotlight and a rotating blue warning light, all protected by expanded metal grilles. The Hotspur's side skirts were retained, as was its fire protection system. In addition, burning petrol was prevented from entering the engine bay by a fabric strip around the bonnet edge and at the hinge between the bonnet and the front bulkhead. Further, the engine radiator was protected from damage with a substantial louvred grill fabricated from 3 mm steel sheet.

The first Tangi (registration HXI 3593, fleet number 8203) went into action on 16 January 1986. Crews were very welcoming of the Tangi and much preferred it to the Hotspur, mainly thanks to its power steering and air conditioning which the Hotspur lacked, and that it was impervious to most of the weapons encountered during civil disorder.

The use of coffee jars filled with explosives, which were dropped onto the roof of Tangis driving under overpasses, led to the adoption of the Dawson roof. This was effectively a second steel roof mounted over the first and works similar to spaced armour, detonating the IED before it struck the main armoured roof. Vehicles fitted with the Dawson roof were easily identified due to its large, angular appearance.

Similar IEDs were fitted with small drogues on the rear, so they could be thrown horizontally to strike the side of a Tangi thus circumventing the additional roof armour. The RUC responded to this with a similar measure to the Dawson roof, fitting a plate of ballistic steel several inches from the hull to detonate the bomb before it struck the main armoured body. In this final form, with the Dawson roof and hardened side armour, the Tangi is seen on the streets of Northern Ireland today.

Tangis are known to the local population as 'meat wagons' (as the police are often referred to as 'pigs') or a 'Newry ice-cream van'. The vehicles are synonymous with Northern Ireland's Troubles. At the height of the Troubles the vehicles were essential for patrolling across Northern Ireland, carrying two police officers in the front and a maximum of five officers wearing riot helmets and carrying shields in the rear. At this time they were painted in a dark grey livery. A number of people were killed after being hit by the vehicles during the Troubles, usually in riot situations.

Since the Good Friday Agreement and the resulting peace, the vehicles are largely used for crowd control, particularly during contested Orange Order parades.

The vehicles are now painted in standard white, yellow and blue Battenburg markings, as seen on the majority of police vehicles throughout the United Kingdom, rather than the original battleship grey. The original rotating blue beacons have been replaced with full width halogen light bars and small blue strobes fitted to the front grill.

More than half of the former RUC (now PSNI) fleet of 450 armoured Land Rovers were decommissioned under the terms of the Good Friday Agreement. A number, mainly Tangis, came back to the mainland UK to be refurbished and distributed among UK forces. North Wales Police are known to operate Tangis, South Yorkshire Police have three and after the Bradford riots West Yorkshire Police bought six.Currently the Tangi's are being phased out in Northern Ireland for new replacement models of the PANGOLIN  Public Order Land Rover (Mk 1 & 2) and the Penman Public Order Land Rover

The vehicle has become popular with collectors. Die-cast models and artwork of the vehicles are available.

The Hotspur Hussar is a military armoured personnel carrier designed in 1984 and based upon the Land Rover Hotspur and Tangi. It features a third driven axle to provide a 6x6 configuration and is capable of carrying a crew of two plus ten fully equipped soldiers over rugged terrain. Up to six gun ports may be provided, three on each side of the vehicle through which the occupants can fire at an enemy. The Hotspur Hussar was exported to Egypt and Sri Lanka. 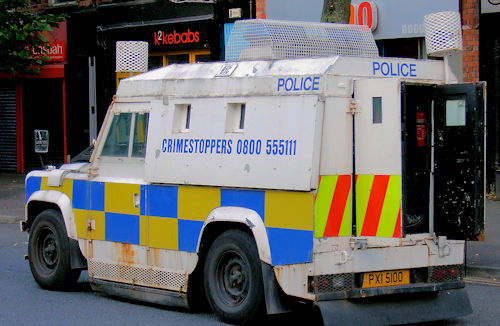