The third-generation Jaguar XJ (X350) (2003–2007) is a luxury car from Jaguar Cars, introduced in 2003 as the successor of the XJ Mark 2 (X308), and facelifted as the XJ (X358) in 2008. While the car's exterior and interior styling were traditional in appearance, the car was completely re-engineered. The new car also saw the return of the fabled XJ6 badge, and with it six-cylinder power, albeit in a V-configuration. It was only equipped with automatic transmission, like most Jaguars.

Like the Audi A8, the X350's chassis and body are constructed from aluminium. While some steel is used in places throughout the chassis, the X350 has a stressed aluminium monocoque/chassis similar in general design to a conventional steel structure, but with two differences; its underbody components are bonded together with aerospace-grade epoxy adhesives while around 3,200 self-piercing rivets are used to create the new XJ's unibody.

This differs from the A8's construction which uses an aluminium spaceframe to which aluminium panels are then attached. However, the aluminium Audi A8 weighs a comparatively high 1,830 kg (4,000 lb) (3.0 V6 TDi) compared to 1,539 kg (3,390 lb) of the (3.0 V6) XJ. On its own, the current XJ's bodyshell weighs about the same as a contemporary Mini Hatch. If the car were made of steel, it is estimated that it would weigh 40% more.

The new structure, and the need to continually improve the car's ride and handling, dictated a number of other mechanical changes. The third generation of Jaguar's rear suspension moved away from the previous double wishbone layout in favour of a more sophisticated multi-link arrangement. In addition the car has all round adaptive air suspension.

Some of the styling features that distinguish the X350 from the previous XJ include the outer headlights, which are larger than the inner headlights, and wheels which are pushed out further towards the corners of the car (due to an increased wheelbase), both like the original Mark 1 XJ. Also, the X350 dispenses with the separate "sixthlight" rear side window of its predecessor, reverting back to two side windows with quarterlight glasses mounted in the rear doors, like the Mark 1. Moreover, beginning in 2004, changes have been made to the distinctive chrome side window frames of the XJ, where the use of chrome in the areas in between the front and back doors has been discontinued, in effect hiding the B-pillars. The curve in the rear door and rear screen resembles that of the Jaguar saloons of the 1950s and 1960s.

The vehicle was the first in Jaguar to be built using self-piercing rivets.

In 2005, Jaguar introduced the diesel-powered XJ TDVi, featuring the same Ford-Peugeot-developed 2.7 litre twin-turbo V6 found in the S-Type. The engine, known as the AJD-V6, produces 204 bhp (152 kW; 207 PS) and 321 lb·ft (435 N·m) of torque, and was fitted with electronically controlled active engine mounts in order to minimise vibration at idle.

The Super V8, also known as the Daimler Super Eight, is the most expensive model, with the XJR second. The Super V8, which debuted in the 2003 model year in the new X350 body style, was essentially a long-wheelbase, supercharged XJ8 with the more luxurious Vanden Plas, or Daimler interior. Its primary competitor was the Mercedes-Benz S55 AMG. A distinctive wire mesh grille and chrome-finished side mirrors set the Super V8 and the XJR apart from the less expensive XJ saloons. In 2005, the Super V8 model was replaced by the Daimler Super Eight in all markets other than North America. The Daimler Super Eight is essentially the same car, but with the addition of a different grille, boxwood inlays in the wood veneer and several other interior luxuries as standard. Daimler's US equivalent is no longer known as the Vanden Plas, but the Super V8. The Vanden Plas name is used on models that would be known as Sovereign elsewhere. Daimler has been the State Car for the British Prime Minister since the 1980s.

For 2007, the premium model was the reintroduced Jaguar Sovereign when the Super V8 and Daimler versions were dropped.

In early 2005, Jaguar announced its most exclusive and expensive XJ saloon since ceasing V12 production. Called the 2006 Super V8 Portfolio, it is a limited-edition trim level of the flagship Super V8 saloon. It debuted at the New York International Auto Show in March 2005, and is the most expensive Jaguar saloon produced to date, with a base price of US$115,995. The Portfolio features added power as well as exterior and interior enhancements, including a DVD player and 7-inch screens in the rear headrests. The Super V8 Portfolio, aimed at North American markets, became available in August 2005. It is available in only two new, limited colours: Black Cherry and Winter Gold. 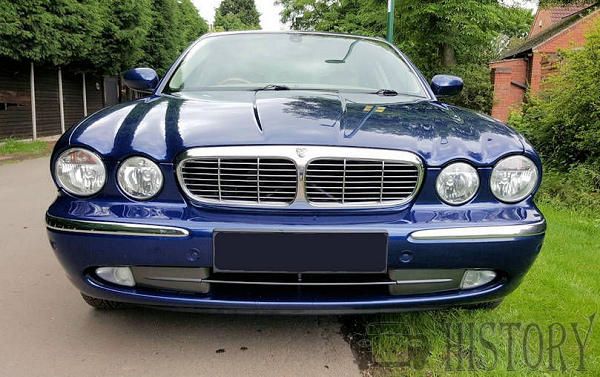