The Jaguar XJ (X308) is a luxury sedan manufactured and sold by Jaguar Cars between 1997 and 2003. It is an evolution of the outgoing X300 platform, and the exterior styling is nearly identical between the two generations. The major change was the introduction of Jaguar's AJ-V8 as the only available engine. Like all previous XJ generations, it features the Jaguar independent rear suspension arrangement.

The X308 kept much of the same exterior styling as the X300, with its rounded four-headlamp bonnet, low roofline, sloping tail, and wrap-around rear light clusters. From the front, the two generations can be differentiated by the shape of the indicator lenses (rectangular on the X300, oval on the X308), and by the shape of the fog lamps and lower valance air intake (both of which are more rounded on the X308.) The bumpers F/R were changed, the taillights had red/clear lenses, rather than red/grey lenses. The grill surround and badging was slightly changed. The headlight fixtures also included forward parking lights housed with the brights, new to X308.

The instrument binnacle of the XJ40 and X300 was replaced on the X308 with three large, separate gauges set into recesses in the curved dashboard. Door trim and the design of the center console were also slightly revised. 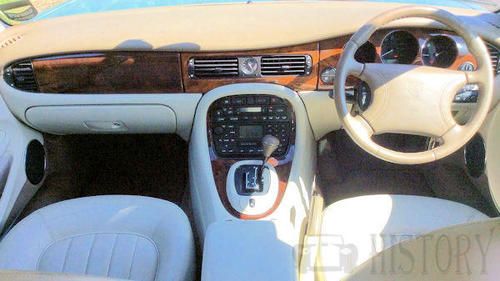 Having discontinued production of both the AJ16 inline-six and V12 engines, Jaguar offered only its newly designed V8 engine (named the AJ-V8.) It was available in either 3.2 L or 4.0 L form, although certain markets (such as the United States) only received cars powered by the 4.0 L version. The 4.0 L version was also supercharged in certain models.

As with previous generations of the XJ, base models were generally not offered outside of the UK home market. Also, instead of the Daimler marque being used in certain markets, the equivalent "Vanden Plas" models were sold under the Jaguar name.

The base XJ8 came standard with more equipment than had been fitted to entry-level XJs in the past, including leather upholstery, alloy wheels, and air conditioning. The door mirrors and door handles are body-coloured. The radiator grille, windscreen and rear window surrounds, boot lid plinth, and rain gutters were chromed, while the window frames remained matte black. Interior wood trim is walnut. Rear badging reads "XJ8". 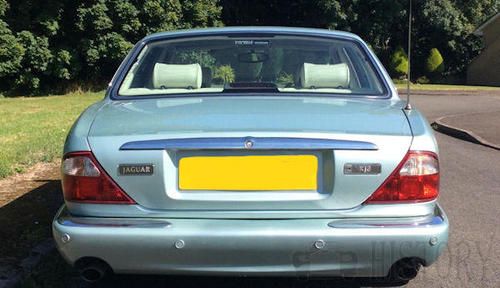 For the home market in September 2000, Jaguar began badging the XJ8 model as "XJ Executive", and fitted as standard rain-sensing wipers, a CD player, cruise control, and rear parking sensors.

The Sport model was equipped only with the 3.2 L normally aspirated engine, and, in 2002-2003 in the American market with a 4.0 L normally aspirated V8. It offered stiffer suspension, sportier seating and interior colour combinations, and wider/larger wheels than the XJ8. The windscreen and rear window surrounds were painted matte black, as were the rain gutters and window frames for European markets (the US retains chrome surrounds). The radiator grille has metallic grey vertical slats. Rather than a chrome radiator grille surround, the Sport uses a body-coloured surround. Rear badging reads "XJ Sport".

As with previous "Sovereign" XJ models, this was marketed to those customers who wanted traditional Jaguar luxury features. The interior is trimmed with burl walnut. All the exterior trim is chromed (including window frames, rain gutters, light cluster surrounds, radiator grille surround, and boot lid plinth.) Rear badging reads "Sovereign".

The XJR is powered by the supercharged version of the 4.0 L V8. It is also equipped with sport suspension, wider wheels and tires, and matte-black exterior window trim (except in the US market, where the XJR was given chrome window frames and rain gutters.) Like the Sport model, the XJR has a body-coloured radiator grille surround, but with a stainless-steel mesh insert rather than the normal vanes. Other exterior touches include the "XJR" rear badging and larger exhaust outlets.

In 2002, to commemorate the 100th anniversary of Sir William Lyons' birth, Jaguar produced five hundred examples of a special-edition model named the "XJR 100". Only available in the Anthracite exterior color with charcoal leather upholstery, the interior is trimmed with contrasting red stitching and birdseye maple. It is fitted with a leather-covered sports steering wheel and MOMO shift knob. The XJR 100 uses the Brembo brakes otherwise found on the R1-equipped XJR, plus 19" "Montreal"-style wheels manufactured by BBS.

Produced only in 2002, the SE (Special Equipment) model was fitted with more equipment than the base model, and offered at a competitive price. The rear badging read "SE", and the cars were fitted with reverse parking sensors as standard.

The top-of-the-range Daimler marque (sold as the Vanden Plas model in certain markets like the US) features softer suspension and all available luxury features. They are cosmetically differentiated by the traditional Daimler fluted radiator grille surround and fluted boot-lid plinth.

The Daimer and Vanden Plas cars were also available with the supercharged engine otherwise found only in the XJR. This model was named the Daimler Super V8. In the US market, this combination was available only as a special order though 2001 (with these cars identifiable by their "Vanden Plas Supercharged" rear badging). For US model years 2002 and 2003, the equivalent Super V8 model was then offered. These Supercharged long-wheelbase variants were also fitted with Jaguar's Proprietary CATS adaptive suspension. The "Sports" setup from the XJR application, however, is replaced by a "touring" set-up, exclusive to supercharged Daimler and Vanden Plas variants. It is softer and more compliant than the XJR's Computer Adaptive Technology Suspension system.