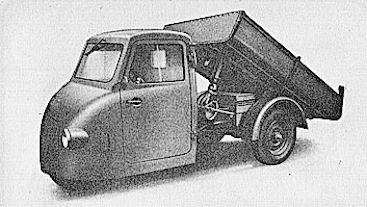 Alenia Aermacchi was an Italian aircraft and after the second world war a small vehicle manufacturer based in Venegono Superiore near Varese Italy.

Aermacchi, formerly known only as Macchi, was active in aircraft construction for around 100 years. Alenia Aeronautica emerged from the also traditional aircraft industry of Fiat , which merged in 1969 with other companies in the state-owned company Aeritalia and after another merger became Alenia.The Fiat aircraft division was created in 1908, when it developed engines for racing cars, a first aircraft engine. In this tradition stands today the company Avio Aero  . In 1916, Fiat founded the company Società Italiana Aviazione , which among other things built licensed aircraft.Aeritalia was founded in 1969 in Naples , when the aircraft manufacturers from Fiat merged with Aerfer and Salmoiraghi to form a new group. In 1976, Aeritalia was 100% state-owned. In 1990, Finmeccanica (now Leonardo ) Aeritalia merged with the defense electronics company Selenia to Alenia. This created Italy's leading aerospace and defense group .

The brothers Giovanni and Agostino Macchi built carriages in the second half of the 19th century . Their descendants remained connected to the road: Giovanni, Giuseppe, Enrico and Giulio Macchi founded on June 19, 1905, the corporation Società Anonima Fratelli Macchi . The company was initially primarily active in railway construction , from 1948 to 1960 Macchi also built motorcycles and commercials Three-wheeled Known as Aermacchi or Macchi went into production in the Soc Commerciale Aeronautica Macchi SpA aircraft factory at Varese, comprising both light- and mediumweight models. Using a tubular
backbone chassis and shaft-drive, the most popular model had a 750cc flat-twin engine and an 8 forward and 2 reverse gearbox. A 4-wheeled version, with front wheel-drive and torsion-bar independent suspension, appeared in the followed in 1957 by a new 3-wheeler with 18bhp 973cc 2-cyl air-cooled diesel engine. The company was acquired by Harley- Davidson in 1960, being re-named Aermacchi Harley-Davidson SpA, but in 1969 Harley-Davidson was itself taken over and the firm re-named AMF-Harley-Davidson Varese SpA. Later, manufacturing rights were acquired by Fratelli Brenna who sold the design as the Bremach.

In October 1912, the Italian Ministry of War issued a tender for new military aircraft . Giulio Macchi then founded together with the French Société Anonyme des Etablissements Nieuport on 1 May 1913 in Varese in Milan the company Società Anonima Nieuport-Macchi , which then in Aeronautica Macchi has been renamed. During the First World War Macchi specialized in flying boats . One of the best known types of this time was the Macchi M.5 . In addition, land aircraft were manufactured, especially under license, including the Nieuport 11 .

Shortly after the war, Macchi converted military aircraft into civilian types that could be used for passenger or cargo transportation. Also began with the production of record airplanes. The development ended in 1931 with the Macchi MC.72 , at that time the fastest aircraft, which reached over 700 km / h. Chief developer was Mario Castoldi , to which the type designation MC goes back. During the Second World War Aermacchi built the fighter planes.In the mid-1950s, the turn to the jet aircraft was ushered in with the Aermacchi MB 326 .Aermacchi took over the program of SIAI-Marchetti and thus also the successful type SF.260

Aermacchi Motorcycle, distributed by Harley-Davidson in the USA.In 1948, Giulio Macchi began producing motorcycles at a branch in Milan . The first model was a simple one with a 123 cc two-stroke engine , soon followed by new engines with OHV engines. In the 1960s, the motorcycle division of Aermacchi went into the possession of Harley-Davidson over. The further development of racing bikes with twin-cylinder engines for the 250 cm², 350 cm³ and 500 cm³ classes was very successful. Walter Villa became motorcycle world champion in the 250 cm² class on such a machine in 1973 and 1974 . In 1978, the plant was sold to Cagiva .

The company began in 1946 for a short time with the production of three-wheelers , in which the single wheel was in front. For the drive provided a two-cylinder engine with 750 cc displacement , which was operated with naphtha and 25 hp (18.4 kW) made. The Macchi MB1 was available as a passenger and van; later there were also diesel versions. From 1963 presented model Gabry emerged only prototypes . First, an air-cooled two-stroke engine with 150 cc was used; which was later replaced by a two-cylinder engine. The engine was mounted in the rear. The body was made of plasticand had sliding doors .

The Macchi MB1 or Macchitre is a motor tricycle  extending from Ermanno Bazzochi  constructed and from 1945 by Aeronautica Macchi , Italy , was built. The same trucks also provided Bremach at Brescia as motocarro Bremach.

The Macchi MB1 was Aermacchi's first road vehicle and the only one until the launch of the scooter Cigno in 1951. This had a driver's cab for two people and a dump truck. The vehicle was mainly used for freight and passenger transport over short distances. The good ride comfort, which was due to the derived from the aircraft construction front suspension, made the truck very popular. The suspension was the same as that of the aircraft carts.  A four-stroke engine  with 750 cc capacity, an output of 25 hp (18.4 kW) and naphtha drove the car as a fuel. The vehicle weighed 1175 kg empty. and had a payload of 1500 kg.

The Macchi MB1 was used for both civilian and military purposes. The manufacturer installed several components of his military aircraft, which he adapted for the new purpose accordingly. The vehicle was easy to maintain and equipped with a wheel guard that could be easily removed for repair. In 1957, the production of the Macchi MB1 was also licensed to Ing. Negri & CSpA , who also built the truck in a smaller version with a maximum payload of 790 kg. The original version was switched to diesel operation in 1955 and received an engine with 1000 cc displacement.

In the following years, Harley-Davidson bought Aermacchi and marketed the products under the name Aermacchi-Harley-Davidson. In 1978, the company went to the brand Cagiva . In 1971, the production of the truck was transferred to a small company called Fratelli BRENNA , which sold it under the brand BREMACH .

As soon as the Macchi MB1 was offered as Bremach, its classic round lines were changed with the round headlights . The new version was more modern and angular and the headlights were rectangular. The Bremach was built until the late 1990s; then the project was resold cheaply to Aerdiesel in Vicenza .