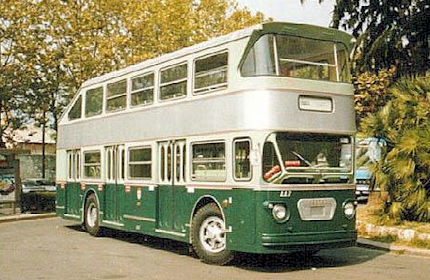 The company belonging to IRI -Finmeccanica (now Leonardo ) emerged from the Meccaniche Aeronautiche Meridionali (IMAM) industry in the 1950s . The aim of Aerfer SpA was to continue some of the developments in aeronautical technology that had been discontinued at the end of the Second World War .From this the types Aerfer Sagittario II and Aerfer Ariete built.

In the 1960s, the company also manufactured vehicles for public transport .

A Bus With light-alloy construction The bus was 11 m long, 2.5 m wide and 4.1 m high., the largest was a 150-passenger double-decker bus with the chassis of the Fiat 421 type Aerfer VE 111 Metropol  with a 150bhp horizontal Fiat diesel engine and automatic transmission which was located at the unusual design rear as was the passenger entrance with room for 45 seated and 60 standing. The buses were used in the city of Rome and Florence .

In 1969, Aerfer merged with Salmoiraghi and the aircraft division of Fiat Aviazione now as part of the Aeritalia group.