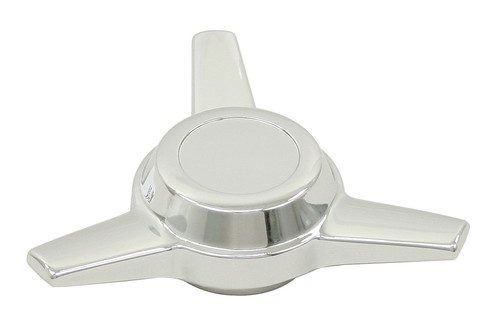 The spinner on automobile wheels historically refers to knock-off hubs or center caps. They may be the actual, or intended to simulate, the design used on antique vehicles or vintage sports cars. A "spinner wheel" in contemporary usage is a type of hubcap or inner wheel ornament, that spins independently inside of a wheel itself when the vehicle is in motion, and continues to spin once the vehicle has come to a stop.

The spinner cap was introduced into the commercial vehicle and passenger automobile market in the 1930s.The spinner or "knock-off" was designed to keep the wheel on the automobile. They were screwed on and "knocked on tightly" using hammers and tools, hence the name "knock-offs". The driver's side wheel knock-off spinner of the auto's wheels were screwed on in a counter clockwise and the passenger side was screwed on in a clockwise so they would stay tightened as the auto was in forward motion. They were used until the development of the lug nut method attaching the wheel.

During the 1950s automobile manufacturers offered simulated wire wheel covers for a look of luxury that featured criss-crossing spokes designed to look like the real wire wheels that were used on vehicles in the 1920s and 1930s. These "spinner-wheel covers" were available on standard as well as featured on custom cars, and lowriders quickly adapted them for their own vehicles.

During the early-1960s, the simulated wire wheel covers returned, but with new look designed to emphasize sportiness with their radiating spokes and center "spinner caps." These classic center spinner caps feature a rigidly mounted propeller-like center element, usually with two or three projecting "blades." They were intended to simulate the knock-off hubs that were used on vintage racing vehicles and classic sports cars where a hammer or special wrench was used on the spinner to release or tighten the wheel to the hub.

These spinner hubcaps were most often an optional appearance upgrade to the standard equipment hubcaps or full wheel covers that attached to stamped steel wheels.

In the late 1960s, U.S. Federal safety standards banned the use of protruding bar spinners on automobiles.

The mid-1950s Dodge four-bladed “spinner” wheel covers became an icons for the era and also became an item popular to owners to customize their cars.

Spinners were add on accessory marketed during the 1950s to decorate regular wheel covers for a custom look. Center spinner hubcaps were also available as original equipment from automakers.

Custom wheels for lowriders also used naked ladies on wheel covers and these were the first to feature a floating or spinner-type wheel device. A bracket was used to mount to the spindle so while the lady stood still the wheel spun around.Similarly, the Rolls-Royce Phantom has anti-spinners — the "RR" logo in the center of the hub is mounted on a spinner with an offset weight designed to ensure that the logo is always the right way up when the car is parked.

The hubometers used on large trucks, buses, and trailers that appear to be stationary while the wheel is turning to accurately measure the actual distance covered. They are actually enclosed and float in a liquid with anti-freeze as to be functional in severe low temperatures without freezing.

The modern spinner device is a decorative kinetic attachment to the wheel of an automobile. The spinner covers the center of a car's wheel and is designed to independently rotate by using one or more roller bearings to isolate the spinner from the wheel, enabling it to turn while the wheel is at rest.