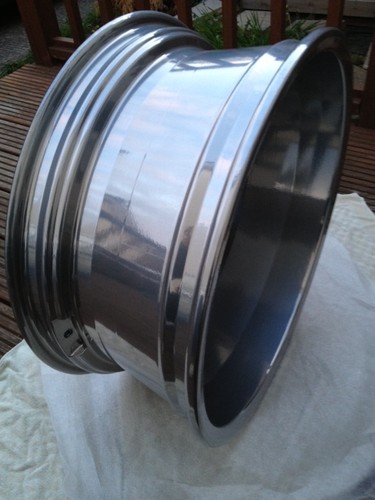 The rim is the "outer edge of a wheel, holding the tire." It makes up the outer circular design of the wheel on which the inside edge of the tire is mounted on vehicles such as automobiles. For example, on a bicycle wheel the rim is a large hoop attached to the outer ends of the spokes of the wheel that holds the tire and tube.

Modern passenger vehicles and tubeless tires typically use one-piece rims with a “safety” rim profile. The safety feature helps keep the tire bead held to the rim under adverse conditions by having a pair of safety humps extending inwardly of the rim toward the other tire bead seat from an outer contoured surface of the rim.
Heavy vehicles and some trucks may have a removable multi-piece rim assembly consisting of a base that mounts to the wheel and axle. They then have either a side ring or a side and lock ring combination. These parts are removable from one side for tire mounting, while the opposite side attached to the base has a fixed flange.

Overly wide rims in relation to the tire width for a particular car may result in more vibration and less comfortable ride because the sidewalls of the tire have insufficient curvature to flex properly over rough driving surfaces. Oversized rims may cause the tire to rub on the body or suspension components while turning.
Overly narrow rims in relation to the tire width may cause poor handling as the tire may distort sideways under fast cornering. On motorcycles, a narrow rim will alter the tire profile, concentrating tire wear in a very small area during cornering, with a smaller contact patch during braking.
On bicycles, the optimum tire width is approximately twice the rim's internal width (e.g. a 35mm tire on a rim with an ETRTO 17mm internal width) or one-and-a-half times the rim's external width.Considerable variation outside this range is safe, but very wide tires on a narrow rim can overstress the rim and damage the tire sidewalls, whereas very narrow tires on a wide rim give a hard ride and can result in a high-pressure tire blowing off.

A standard automotive steel wheel rim is made from a rectangular sheet metal. The metal plate is bent to produce a cylindrical sleeve with the two free edges of the sleeve welded together. At least one cylindrical flow spinning operation is carried out to obtain a given thickness profile of the sleeve — in particular comprising in the zone intended to constitute the outer seat an angle of inclination relative to the axial direction. The sleeve is then shaped to obtain the rims on each side with a radially inner cylindrical wall in the zone of the outer seat and with a radially outer frusto-conical wall inclined at an angle corresponding to the standard inclination of the rim seats. The rim is then calibrated.

To support the cylindrical rim structure, a disc is made by stamping a metal plate. It has to have appropriate holes for the center hub and lugnuts. The radial outer surface of the wheel disk has a cylindrical geometry to fit inside the rim. The rim and wheel disk are assembled by fitting together under the outer seat of the rim and the assembly welded together.

One-piece rim and wheel assemblies (see image) may be obtained by casting or forging.

The terms "wheel" and "rim" are often used synonymously, as in decorative wheels being called rims. Some authors are careful to use "rim" for only the outer portion of a wheel, where the tire mounts, just as the rim of a coffee cup or a meteor crater does not refer to the entire object. Others use "rim" to mean the entire metal part to which the tire mounts, because the rim and the wheel are often cast or stamped from a single piece of metal instead of being distinct as with wire wheels. At the same time, "wheel" may refer to the entire rotating assembly, including the tire.