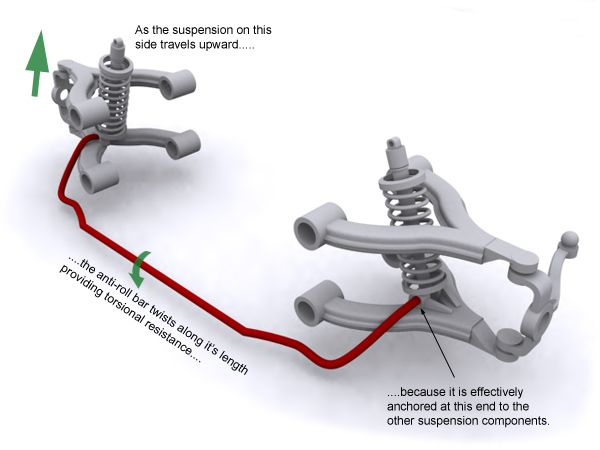 A sway bar or anti-roll bar or stabilizer bar is a part of an automobile suspension that helps reduce the body roll of a vehicle during fast cornering or over road irregularities. It connects opposite (left/right) wheels together through short lever arms linked by a torsion spring. A sway bar increases the suspension's roll stiffness—its resistance to roll in turns, independent of its spring rate in the vertical direction. The first stabilizer bar patent was awarded to the Canadian S. L. C. Coleman of Fredericton, New Brunswick on April 22, 1919.

An anti-sway or anti-roll bar is intended to force each side of the vehicle to lower, or rise, to similar heights, to reduce the sideways tilting (roll) of the vehicle on curves, sharp corners, or large bumps. With the bar removed, a vehicle's wheels can tilt away by much larger distances (as shown by the SUV image at right). Although there are many variations in design, a common function is to force the opposite wheel's shock absorber, spring or suspension rod to lower, or rise, to a similar level as the other wheel. In a fast turn, a vehicle tends to drop closer onto the outer wheels, and the sway bar will soon force the opposite wheel to also get closer to the vehicle. As a result, the vehicle tends to "hug" the road, closer in a fast turn, where all wheels are closer to the body. After the fast turn, then the downward pressure is reduced, and the paired wheels can return to their normal height against the vehicle, kept at similar levels by the connecting sway bar.

Because each pair of wheels is cross-connected by a bar, then the combined operation causes all wheels to generally offset the separate tilting of the others, and the vehicle tends to remain level against the general slope of the terrain. A negative side-effect, of connecting pairs of wheels, is that a jarring or bump to one wheel tends to also jar the opposite wheel, causing a larger impact applied across the whole width of the vehicle. If there are several potholes scattered in the road, then a vehicle will tend to rock, side-to-side, or waddle, due to the action of the bar at each pair of wheels. Other suspension techniques can be used to delay, or dampen, the effect of the connecting bar, as when hitting small holes which momentarily jolt just a single wheel, whereas larger holes or longer tilting would then tug the bar with the opposite wheel.

A sway bar is usually a torsion spring that resists body roll motions. It is usually constructed out of a wide, U-shaped (in plan view) cylindrical steel bar that connects to the body at two points, and at the left and right sides of the suspension. If the left and right wheels move together, the bar rotates about its mounting points. If the wheels move relative to each other, the bar is subjected to torsion and forced to twist. Each end of the bar is connected to an end link through a flexible joint. The sway bar end link in turn connects to a spot near a wheel or axle, permitting forces to be transferred from a heavily-loaded axle to the opposite side.

The bar resists the torsion through its stiffness. The stiffness of an anti-roll bar is proportional to the stiffness of the material, the fourth power of its radius, and the inverse of the length of the lever arms (i.e., the shorter the lever arm, the stiffer the bar). Stiffness is also related to the geometry of the mounting points and the rigidity of the bar's mounting points. The stiffer the bar, the more force required to move the left and right wheels relative to each other. This increases the amount of force required to make the body roll.

In a turn the sprung mass of the vehicle's body produces a lateral force at the centre of gravity (CG), proportional to lateral acceleration. Because the CG is usually not on the roll axis, the lateral force creates a moment about the roll axis that tends to roll the body. (The roll axis is a line that joins the front and rear roll centers (SAEJ670e)). The moment is called the roll couple.

Roll couple is resisted by the suspension roll stiffness, which is a function of the spring rate of the vehicle's springs and of the anti-roll bars, if any. The use of anti-roll bars allows designers to reduce roll without making the suspension's springs stiffer in the vertical plane, which allows improved body control with less compromise of ride quality.

One effect of body (frame) lean, for typical suspension geometry, is positive camber of the wheels on the outside of the turn and negative on the inside, which reduces their cornering grip (especially with cross ply tires).

Anti-roll bars provide two main functions. The first function is the reduction of body lean. The reduction of body lean is dependent on the total roll stiffness of the vehicle. Increasing the total roll stiffness of a vehicle does not change the steady state total load (weight) transfer from the inside wheels to the outside wheels, it only reduces body lean. The total lateral load transfer is determined by the CG height and track width.

Because an anti-roll bar connects wheels on the opposite sides of the vehicle together, the bar will transmit the force of one-wheel bumps to the opposite wheel. On rough or broken pavement, anti-roll bars can produce jarring, side-to-side body motions (a "waddling" sensation), which increase in severity with the diameter and stiffness of the sway bars. Excessive roll stiffness, typically achieved by configuring an anti-roll bar too aggressively, will cause the inside wheels to lift off the ground during very hard cornering. This can be used to advantage: many front wheel drive production cars will lift a rear wheel when cornering hard, in order to overload the other wheel on the axle, limiting understeer.

Some anti-roll bars, particularly those intended for use in auto racing, are externally adjustable while the car is in the pit whereas some systems can be adjusted in real time by the driver from inside the car, such as in Super GT. This allows the stiffness to be altered by increasing or reducing the length of the lever arms. This permits the roll stiffness to be tuned for different situations without replacing the entire bar.

The MacPherson strut is a common form of strut suspension. This was not the first attempt at strut suspension, but in MacPherson's original patent, the anti-roll bar forms an integral and essential part of the suspension, in addition to its usual function in controlling body roll. A strut suspension like MacPherson's requires a hinged lower member between the chassis and wheel hub to control the wheel position both inwards and outwards (controlling the track), and also forwards and backwards. This may be provided by a wishbone with a number of joints, or by using an additional radius rod. MacPherson's design replaced the wishbone with a simpler and cheaper track control arm, with a single inboard joint, to control the track. Forward and backward position was controlled through the anti-roll bar. Overall this required a simpler and cheaper set of suspension members than with wishbones, also allowing a reduction in unsprung weight.

As the anti-roll bar is required to control wheel position, the bars of a MacPherson strut suspension may be connected through ball joints. However many later "MacPherson strut" suspensions have reverted to using wishbones rather than the simplified track control arm of the original design.

Some high-priced cars, such as the Range Rover Sport and BMW 7-series, have begun to use "active" anti-roll bars that can be proportionally controlled automatically by a suspension-control computer, reducing body lean in turns while improving rough-road ride quality. The first to use this was the Citroen Xantia Activa, a medium sized sedan sold in Europe. The Activa system featured an anti-roll bar that could be stiffened under the command of the suspension ECU during hard cornering. The car rolled at any time at most 2 degrees. Mercedes S-class ABC system uses another approach: the computer uses sensors to detect lateral load, lateral force, and height difference in the suspension strut, then uses hydraulic pressure to raise or lower the spring to counter roll. This system removes the anti-roll bar. Most active roll control systems allow a small degree of roll to give a more natural feel.