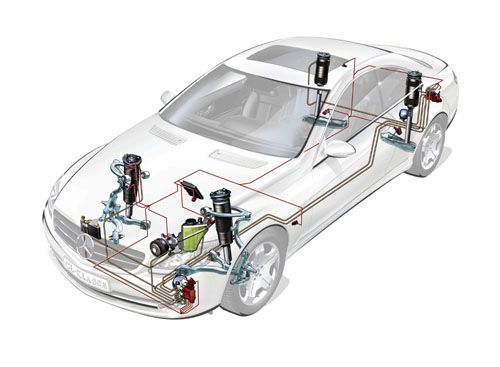 This technology allows car manufacturers to achieve a greater degree of ride quality and car handling by keeping the tires perpendicular to the road in corners, allowing better traction and control. An onboard computer detects body movement from sensors throughout the vehicle and, using data calculated by opportune control techniques, controls the action of the active and semi-active suspensions. The system virtually eliminates body roll and pitch variation in many driving situations including cornering, accelerating, and braking.

Active suspensions, the first to be introduced, use separate actuators which can exert an independent force on the suspension to improve the riding characteristics. The drawbacks of this design (at least today) are high cost, added complication/mass of the apparatus, and the need for rather frequent maintenance on some implementations. Maintenance can be problematic, since only a factory-authorized dealer will have the tools and mechanics with knowledge of the system, and some problems can be difficult to diagnose.

Hydraulically actuated suspensions are controlled with the use of hydraulic servomechanisms. The hydraulic pressure to the servos is supplied by a high pressure radial piston hydraulic pump. Sensors continually monitor body movement and vehicle ride level, constantly supplying the computer with new data. As the computer receives and processes data, it operates the hydraulic servos, mounted beside each wheel. Almost instantly, the servo-regulated suspension generates counter forces to body lean, dive, and squat during driving maneuvers.

In practice, the system has always incorporated the desirable self-levelling suspension and height adjustable suspension features, with the latter now tied to vehicle speed for improved aerodynamic performance, as the vehicle lowers itself at high speed.

Colin Chapman - the inventor and automotive engineer who founded Lotus Cars and the Lotus Formula One racing team - developed the original concept of computer management of hydraulic suspension in the 1980s to improve cornering in racing cars. Lotus developed a version of its 1985 Excel model with electro-hydraulic active suspension, but this was never offered to the public.

Computer Active Technology Suspension (CATS) co-ordinates the best possible balance between ride quality and handling by analysing road conditions and making up to 3,000 adjustments every second to the suspension settings via electronically controlled dampers.

This type of active suspension uses linear electromagnetic motors attached to each wheel. It provides extremely fast response, and allows regeneration of power consumed by utilizing the motors as generators. This nearly surmounts the issues of slow response times and high power consumption of hydraulic systems. It has only recently come to light as a proof of concept model from the Bose company, the founder of which has been working on exotic suspensions for many years while he worked as an MIT professor. Electronically controlled active suspension system (ECASS) technology was patented by the University of Texas Center for Electromechanics in the 1990s and has been developed by L-3 Electronic Systems for use on military vehicles. The ECASS-equipped HMMWV exceeded the performance specifications for all performance evaluations in terms of absorbed power to the vehicle operator, stability and handling.

This type is the most economic and basic type of semi-active suspensions. They consist of a solenoid valve which alters the flow of the hydraulic medium inside the shock absorber, therefore changing the damping characteristics of the suspension setup. The solenoids are wired to the controlling computer, which sends them commands depending on the control algorithm (usually the so-called "Sky-Hook" technique). This type of system used in Cadillac's Computer Command Ride (CCR) suspension system.

Another fairly recent method incorporates magneto rheological dampers with a brand name MagneRide. It was initially developed by Delphi Corporation for GM and was standard, as many other new technologies, for Cadillac Seville STS (from model 2002), and on some other GM models from 2003. This was an upgrade for semi-active systems ("automatic road-sensing suspensions") used in upscale GM vehicles for decades. It allows, together with faster modern computers, changing the stiffness of all wheel suspensions independently. These dampers are finding increased usage in the US and already leases to some foreign brands, mostly in more expensive vehicles. In this system, being in development for 25 years, the damper fluid contains metallic particles. Through the onboard computer, the dampers' compliance characteristics are controlled by an electromagnet. Essentially, increasing the current flow into the damper raises the compression/rebound rates, while a decrease softens the effect of the dampers. Information from wheel sensors (about suspension extension), steering, acceleration sensors and some others is used to calculate the optimized stiffness. The fast reaction of the system allows, for instance, make softer passing by a single wheel over a bump in the road. 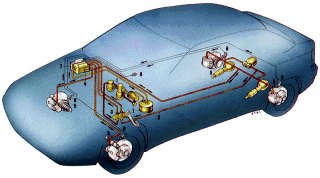 Some production vehicles with active and semiactive suspension