Have your brake lights gone out? If this is the case, a few easy checks should quickly reveal the problem. Driving without working brake lights is not only illegal, but also dangerous. So keep an eye on it at frequent intervals. Also, keep a backup brake light bulb on hand because these can burn out quickly. Because the brake light circuit is one of the most basic electrical circuits in historic cars, it rarely causes many problems. A blown bulb is almost often the source of a brake light malfunction, but a more serious problem can be identified and swiftly repaired by performing a few simple checks.

When the brake lights give trouble, there are usually clues which indicate where the problem lies. Because they have a very simple circuit, most faults can be traced and put right with a few tools and some simple test equipment.A test lamp does for most jobs though a circuit tester is also handy.First check the lights. If only one light is out of action the fault is most likely to be a blown bulb as the brake light switch and main fuse are obviously working.However, the fault could also lie in the earth, bulbholder or wire to that light, so If the bulb has not failed check further.

Although nearly all classic cars have only one fuse for both brake lights a few do have a separate fuse for each light. One common fault is that a tail light goes out as you apply the brakes, so no light shows on that side.This is due to a faulty earth, which breaks down when both lights try to earth themselves through it at the same time.

If both lights have failed, then the fault is most likely to be somewhere in the power feed to both lights the fuse may have blown or the brake light switch may be faulty. It is also possible that both bulbs may have at the same time blown, although rare. But if you rarely check your brake lights you may been running on only one for some time. A failure may have been by a power surge from the generator, Power surges occur but if the same recurs you should have generator checked specialist

If the fault is more serious a blown bulb or fuse and have no idea of the possible cause, work through each section below until you find the problem 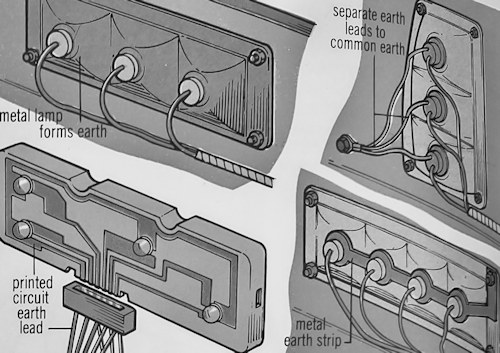 To check whether a bulb is blown, you must first remove it from Its bulbholder. On some the bulb is removed on some cars together With its holder from the rear of the light cluster .In some cases you may have to take the wires off the holder before you remove it, while on others there is enough slack in the wires to get the bulb and its holder out. On other cars the bulb has to be removed from the front, after the coloured lens has been removed. Once you have removed the screws, lift the lens away carefully taking care not to damage the sealing rubber. Examine the rubber seal for a split or perished a damage seal will let water into the light unit and possibly result in a short circuit, so buy a new one if it is damaged.
If there are no screws holding the lens, and the bulb cannot be removed from the rear, then the light's rubber housing holds the lens and chromed ring in place.
To remove this sort of light unit, use a small screwdriver to gently prise up the outer lip of the rubber, then work the chromed ring out. If it proves a little stubborn, use another screwdriver to prise the ring free. Now do the same for the lens be careful not to damage the rubber or it may not make a water tight seal when refitted and the bulbholder will get wet and corrode. Once the lens is off, you can remove the bulb to check it.
Push it inwards then turn it anticlockwise to release it, If the bulb is stuck, spray the holder with penetrating oil and try again. If the bulb is stuck very firmly you will probably find that the bulb glass comes away in your hand leaving the metal cap remaining in the bulbholder.
If this happens, crush the casing with a pair of pliers and twist the bulb out as usual.

If bulbholder is at all corroded you should clean it thoroughly with wet and dry sand paper before you fit the new bulb. If the bulb came out In one Piece, check lt. Most stop lights are stop-tail lights the bulb has two filaments. one for the tail light, and the other for the brake.A broken filament should be clearly visable If you hold the bulb up to the light you should clearly see a break one of the filaments. but If you are not sure, connect the bulb across the battery using a length of wire The bulb Will have two points at the base test both of these. If one filament does not light, buy a new bulb If they both light. the fault lies In the bulbholder or the supply Wire.

If all the bulbs are intact, then first check in the boot that the multi-plug or any other connection has not come adrift or that any wires have not been torn from their connections. Now check that power is reaching the bulbholder. There are two terminals in most rear light bulbholders: one for the tail light and one for the brake light. which, switch on the sidelights and then touch each terminal with the probe of an earthed test lamp.
The one which lights is the sidelight terminal. Now touch the other terminal with the test lamp probe and ask an assistant to depress the brake pedal If the test lamp does not light then there is a fault in the power supply wire .If the test lamp lights, then the bulbholder or its earth must be faulty . The sort of bulbholder which can be removed from the back of the light can be tested by simply swapping it for the one from the other side. If the light now works try cleaning the original bulb-Holder contactson the fault unit. With the integral bulbholder, may just be that there is surface corrosion which is preventing a good contact remove all traces of corrosion off with a light emery board or a piece of wet and dry paper. 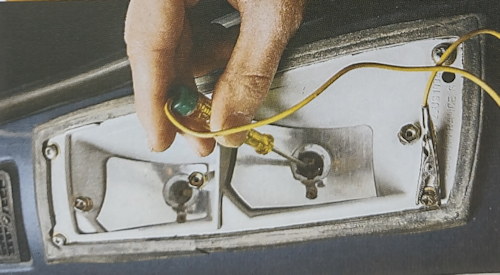 If power is reaching the central contact in the bulbholder and the bulb and bulbholder are both sound but the light still does not work, then the earth needs checking. To check the bulbholder's earth, remove the bulb and attach the clip of a test lamp to the earth. This is usually the outer casing of the holder, but on an integral bulbholder there may be a small brass tag which touches the side of the bulb and earths the light.
Now turn on the ignition, and press the brake pedal down probe the brake light terminal in the holder with the test lamp . If the bulb lights, then the earth is good and the fault must lie in the bulb or bulbholder. If the test lamp does not light, then you have confirmed that the earth is faulty.
To repair the earth, you must find out how the bulbholder is earthed to the car body Metal and clip-in bulbholders usually earth through the casing of the Fuse Box.

If both brake lights have failed and the bulbs are sound or you found no power at the light or at the feed wire in the boot then you must check the power supply from the fusebox to the rest of the circuit. Your first move is to check the fuse which controls the brake lights (your car's handbook will tell you which one it is). If it has not failed look for any signs of looseness or corrosion. If it appears loose, carefully bend the fusebox terminals so that it is held more tightly. Corrosion can affect the fuse box terminals causing either a complete failure of the circuit or more annoyingly an intermittent fault, So check the terminals and remove any signs of corrosion with an emery board or wet and dry paper, If the fuse is securely mounted and not blown, use the test light to check for power at the fuse terminals. The tester should light at both terminals with the fuse in place. If it lights on only one side, recheck the by bending fuse terminal for a tighter hold on the fuse and the holder. If it does not light on either terminal then power is not getting to the fusebox, You can try replacing the feed wire if the fusebox feed wires are easy to get at, Where the terminals are hidden inside the car the job is a lot more difficult as you may need to get the dashboard out. 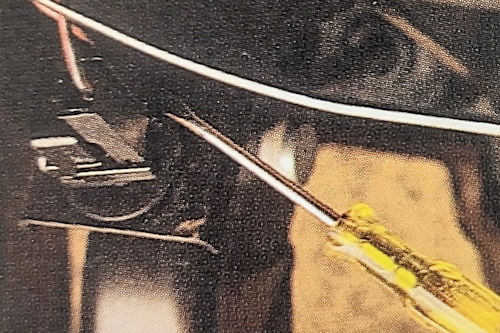 A switch This can be fitted somewhere Into the brake hydraulic circuit, where its operated by pressure in the system, or near to the brake Pedal where pressing down on the pedal operates the switch.To test for power at the switch, attach the test lamp to a good earth point, then press Check for power at both switch terminals if the test lamp only lights on one terminal, the switch faulty and must be changed. To confirm this, disconnect the two wires that run Into the switch and then connect the two together, thus by-passing the switch. If the brake lights now come on you can be sure that the switch is broken and have to be changed touched power to either terminal of the switch then the switch is working and the fault must be in the wire to the back of the car. Instead of trying to find the break in the wire, and splicing in a new section, renew the entire length of wire that runs from the brake switch to the bulbholder.

Disconnect the battery, disconnect the old wire, then lay the new wire down alongside it or under the carpet if that is easier. Wherever you lay the new wire, make sure that It is not exposed; even if It is under the carpet, tape it to the floor Connect up the new wire using new connectors where necessary, then connect up the battery and check that the brake lights now work. No power at either terminal on the switch means that the power wire to the switch is faulty and may need to be replaced As a extension wire from the fusebox switch, If the lights now work when the pedal is pressed,

If you cannot repair the bulbholder, fit a complete new rear light.
if they are hard to come by or a rare car, try to fit just a new bulbholder. If swapping bulbholders does not work. Or if bulb is lose in holder a little silver metal paper round the bottom of the bulb or the body of the bulb may work.Also a temporary measure you can run a suitably thick wire directly from the battery to the fusebox. Be sure to connect it to the right side of the fusebox so that the fuse protects the circuit. If you are in any doubt, once the brake lights are working remove the fuse and check that the lights do not now come on.